Trump's executive order leads US Federal Government to a stalemate 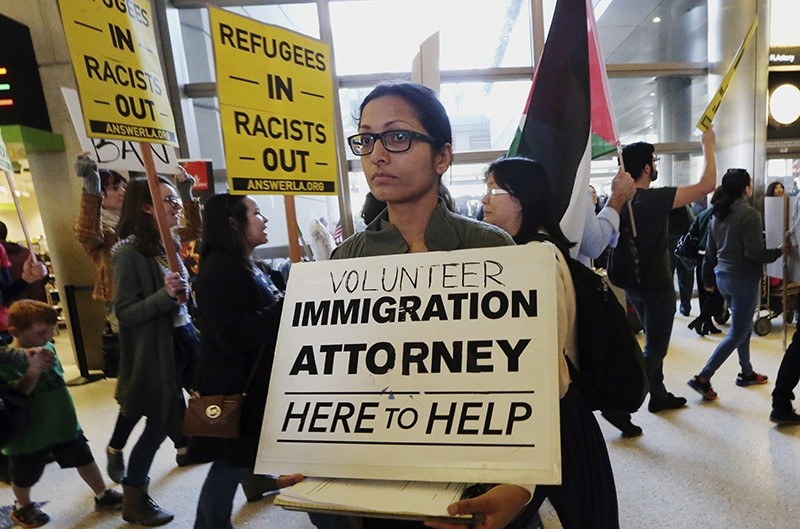 A woman offers legal services at the customs arrival area as demonstrators opposed to President Donald Trump's executive orders barring entry to the U.S. (AP Photo)
by Daily Sabah with Wires Feb 05, 2017 12:00 am
Nationals from seven countries on the Trump Administration's temporary travel ban are rushing to try and enter the U.S. again, hoping to make it through a narrow window opened by legal challenges. The federal appeals court in San Francisco denied the U.S. Justice Department's effort to immediately reinstate the measure on accepting certain travelers and all refugees early Sunday. For now, it remains blocked by a judge's temporary restraining order, and federal officials have told their staffs to comply. Advocates were not taking any chances, telling people who could travel to get on the earliest flights they could find after the week-old restriction was blocked Friday by U.S. District Judge James Robart in Seattle.

"We're telling them to get on the quickest flight ASAP," said Rula Aoun, director of the Arab American Civil Rights League in Dearborn, Michigan. Her group sued in federal court in Detroit, challenging Doanld Trump's executive order as unconstitutional even though U.S. Code section 8 U.S. 1182 grants authority to the president to impose restrictions for a "period as he shall deem necessary, suspend the entry of all aliens or any class of aliens as immigrants or non-immigrants, or impose on the entry of aliens any restrictions he may deem to be appropriate."

Protesters sought to keep up the pressure, gathering in Denver and other U.S. cities to demonstrate against the measure. Meanwhile, legal advocates waited at airports in case anything went wrong with new arrivals.

The U.S. State Department has advised aid agencies that refugees who had been scheduled to travel before the order was signed will now be allowed into the U.S.

A State Department official said in an email obtained by The Associated Press that the government is "focusing on booking refugee travel through Feb. 17," and they were working to have arrivals resume as soon as Monday.

U.S. officials have said up to 60,000 foreigners had their visas "provisionally revoked" to comply with President Trump's order. Confusion during the rollout of the measure initially found green card holders caught in travel limbo, until the White House on Wednesdayclarified that they would be allowed to enter and leave the U.S. as they pleased.

Goldberg said she was trying to arrange flights for dozens of Yemeni citizens who have immigrant visas and were stranded in the African nation of Djibouti.

She said a supervisor at Turkish Airlines told her that people holding immigrant and non-immigrant visas from the seven countries still were being banned unless they had a special email from the U.S. Customs and Border Protection with the person's name and passport number.

In Tehran, the semi-official Fars news agency reported that a ban on U.S. wrestlers has been lifted following the judge's ruling, allowing them to take part in the Freestyle World Cup later this month in the Iranian city of Kermanshah.
Last Update: Feb 06, 2017 2:26 am
RELATED TOPICS