Thousands join rally in New York to say 'Today I am a Muslim, too' 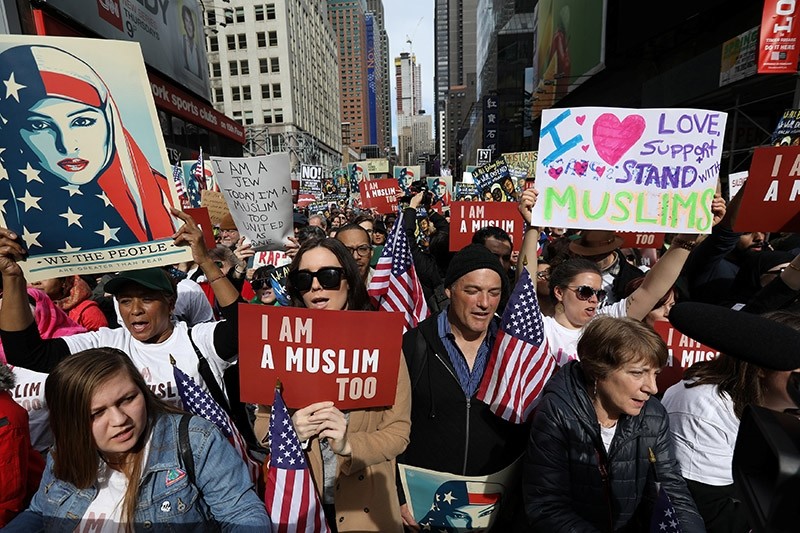 Demonstrations were held in cities around the U.S. this weekend to support Muslim Americans and to protest President Donald Trump's immigration policies.

More than a thousand people of various faiths rallied in New York City on Sunday.

The "I Am A Muslim Too" event was held in Times Square and was organized by several groups, including the Foundation for Ethnic Understanding.

Some protesters waved American flags, while others held signs saying "No Muslim Ban."

Democratic Mayor Bill de Blasio spoke at the peaceful rally, saying "we have to dispel the stereotypes" and that America is "a country founded to protect all faiths and all beliefs."

"Regardless of your background, your faith or where you were born, this is your city." - @NYCMayor #IAmAMuslimToo pic.twitter.com/XU6vnBmlt5

Trump has initiated a crackdown on illegal immigration. He also has called for a temporary ban on people entering the U.S. from seven Muslim-majority countries.

Hip-hop mogul Russell Simmons headlined the event. He said the Muslim community was being used as a scapegoat, but that "diversity will prevail."

In Oregon, hundreds of people demonstrated on Sunday in front of the Oregon State Capitol to voice their support for immigration rights.

Yesica Navarro spoke about growing up as an immigrant. She said she came to the U.S. as a child with her family, and they managed to succeed despite the odds, The Statesman Journal reported.

"We love this country, and we want to be accepted. This is our home," Navarro said.

The crowd, which organizers said neared 1,000, cheered and clapped as cars honked their horns, the newspaper said. The rally was part of a national effort called Immigrants' March Presidents Day 2017.

In Dallas on Saturday, police estimated about 1,700 people rallied downtown in a peaceful show of support for immigrants and refugees.

The Dallas Morning News reported that religious and civic leaders were among those protesting President Donald Trump's immigration policies.

Some marchers carried U.S. flags or banners from other nations and chanted: "Say it loud, say it clear, refugees are welcome here." No arrests were made.

About a dozen counter-protesters stood nearby in support of Trump.