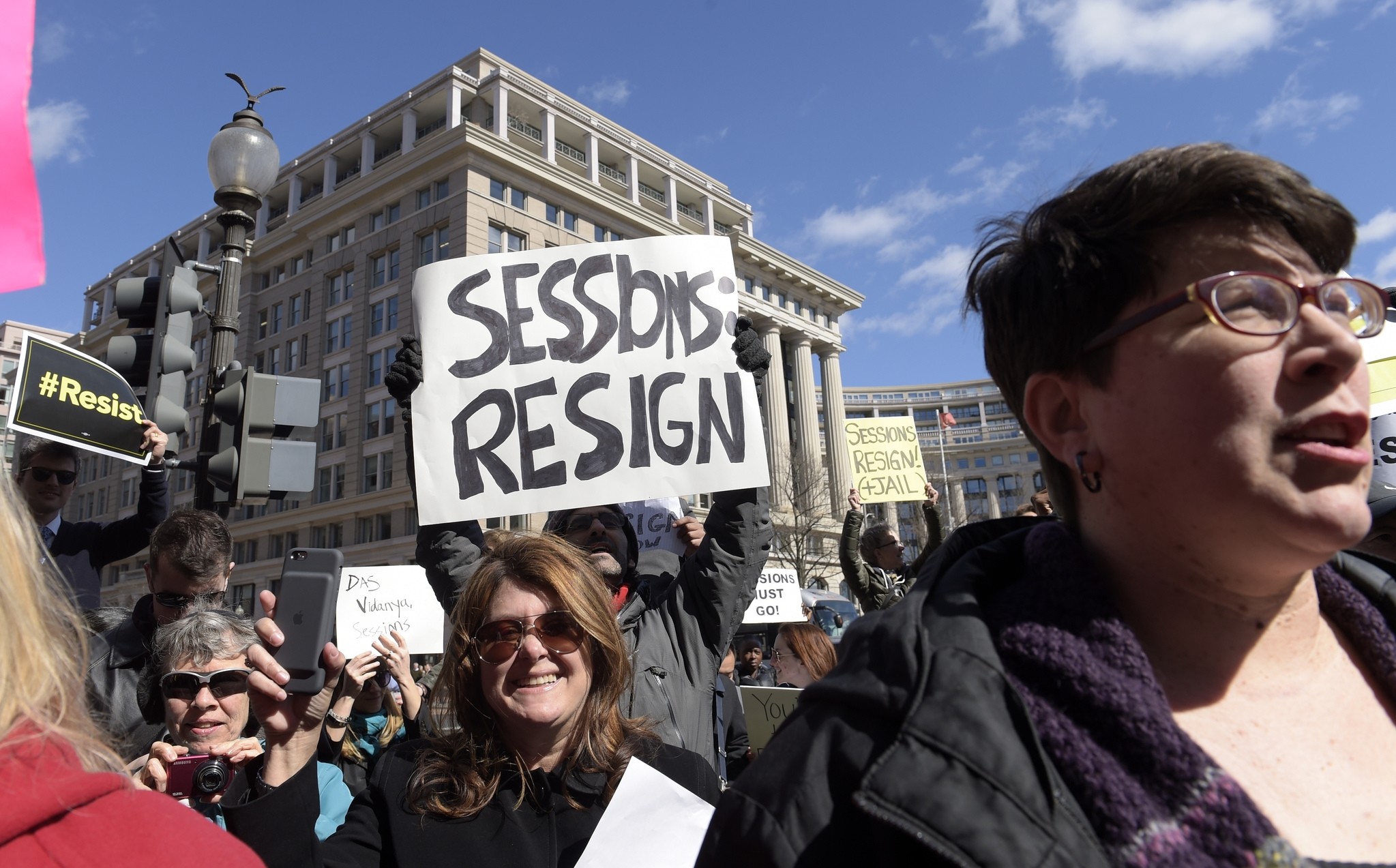 Protestors gather outside the Justice Department in Washington, Thursday, March 2, 2017, during a demonstration against Attorney General Jeff Sessions. (AP Photo)
by Daily Sabah with Agencies Mar 02, 2017 12:00 am

Russia said on Thursday that the recent controversy about U.S. Attorney General Jeff Sessions contacts with the country may hurt the relations between the two countries.

Russian President Vladimir Putin's spokesman Dmitry Peskov said diplomats routinely meet with U.S. lawmakers such as Sessions and the outrage about Sessions' meetings were leading a "resistance to the idea of some kind of U.S.-Russia dialogue."

Also said meetings between Russian and American diplomats were "everyday business", adding that Sessions was subjected to "some kind of media vandalism."

Top Democrats demanded that Sessions go further and resign as the nation's top law enforcement officer after the revelation that he had twice talked with Moscow's U.S. envoy during the campaign. Sessions' conversations with Ambassador Sergey Kislyak seem to contradict Sessions' sworn statements to Congress during his confirmation hearings.

House Democratic leader Nancy Pelosi accused Sessions of "lying under oath," and she and Senate Democratic leader Chuck Schumer said he should step down. Schumer said the Justice Department should appoint a special prosecutor to examine whether the federal investigation into the Kremlin's meddling in the U.S. election has been compromised by Sessions.

"There's nothing wrong with meeting with the Russian ambassador. If there was nothing wrong, why don't you just tell the truth?" Schumer said. "It was definitely extremely misleading to say the least"

"I have said that, when it's appropriate, I will recuse myself" from the investigation, Sessions told MSNBC on Thursday.

There's no need, said White House spokesman Sean Spicer. "There's nothing to recuse himself from" Spicer said in an interview with Fox News. He said that Sessions was "100 percent straight" about his contacts with Russia and that people playing politics with the issue "should be ashamed of themselves."

At least three House Republicans — Reps. Jason Chaffetz of Utah, Darrell Issa of California and Tom Cole of Oklahoma — have said they want Sessions to withdraw from the inquiry. And GOP Sen. Rob Portman of Ohio said that while Sessions was a former colleague and a friend, "I think it would be best for him and for the country to recuse himself."

The attorney general "is going to need to recuse himself at this point," Chaffetz, chairman of the House Oversight and Government Reform Committee, told MSNBC.

House Majority Leader Kevin McCarthy, R-Calif, said he thought Sessions "needs to clarify what these meetings were." He said it isn't unusual for members of Congress to meet with ambassadors, but he added that if a question arose about the integrity of a federal investigation, "I think it'd be easier" for an attorney general to step away.

House Speaker Paul Ryan said Sessions should only recuse himself if he is a subject of the probe.

Sessions, an early supporter of President Donald Trump's candidacy and a policy adviser during the campaign, did not disclose those discussions at his Senate confirmation hearing in January when asked what he would do if "anyone affiliated" with the campaign had been in contact with officials of the Russian government.

Sessions replied that he had not had communications with the Russians, and answered "no" in a separate written questionnaire when asked about contacts regarding the election.

In a statement late Wednesday, Sessions said: "I never met with any Russian officials to discuss issues of the campaign. I have no idea what this allegation is about. It is false."

White House spokeswoman Sarah Huckabee Sanders called the disclosure of the talks with Kislyak "the latest attack against the Trump administration by partisan Democrats." She said Sessions "met with the ambassador in an official capacity as a member of the Senate Armed Services Committee, which is entirely consistent with his testimony."

Sessions had more than 25 conversations with foreign ambassadors last year in his role as a U.S. senator and senior member of the Armed Services Committee, and had two separate interactions with Kislyak, the department confirmed.

One was a visit in September in his capacity as a senator, similar to meetings with envoys from Britain, China, Germany and other nations, the department said.

The other occurred in a group setting following a Heritage Foundation speech that Sessions gave during the Republican National Convention, when several ambassadors — including the Russian — approached him after the talk as he was leaving the stage, according to the department.

Revelations of the contacts, first reported by The Washington Post, came amid a disclosure by three administration officials that White House lawyers have instructed aides to Trump to preserve materials that could be connected to Russian meddling in the American political process.

The officials who confirmed that staffers were instructed to comply with preservation-of-materials directions did so on condition of anonymity because they were not authorized to publicly disclose the memo from White House counsel Don McGahn.

At the confirmation hearing in January, Sen. Al Franken, D-Minn., asked Sessions about allegations of contact between Russia and Trump aides during the 2016 election. He asked Sessions what he would do if there were evidence that anyone from the Trump campaign had been in touch with the Russian government during the campaign.

Sessions replied he was "unaware of those activities."

Then he added: "I have been called a surrogate at a time or two in that campaign and I didn't have, did not have communications with the Russians, and I'm unable to comment on it."

Separately in January, Sen. Patrick Leahy, a Judiciary Committee Democrat, asked Sessions in a written questionnaire whether "he had been in contact with anyone connected to any part of the Russian government about the 2016 election, either before or after Election Day."