Sessions recuses himself from Clinton investigations after ethics consultation 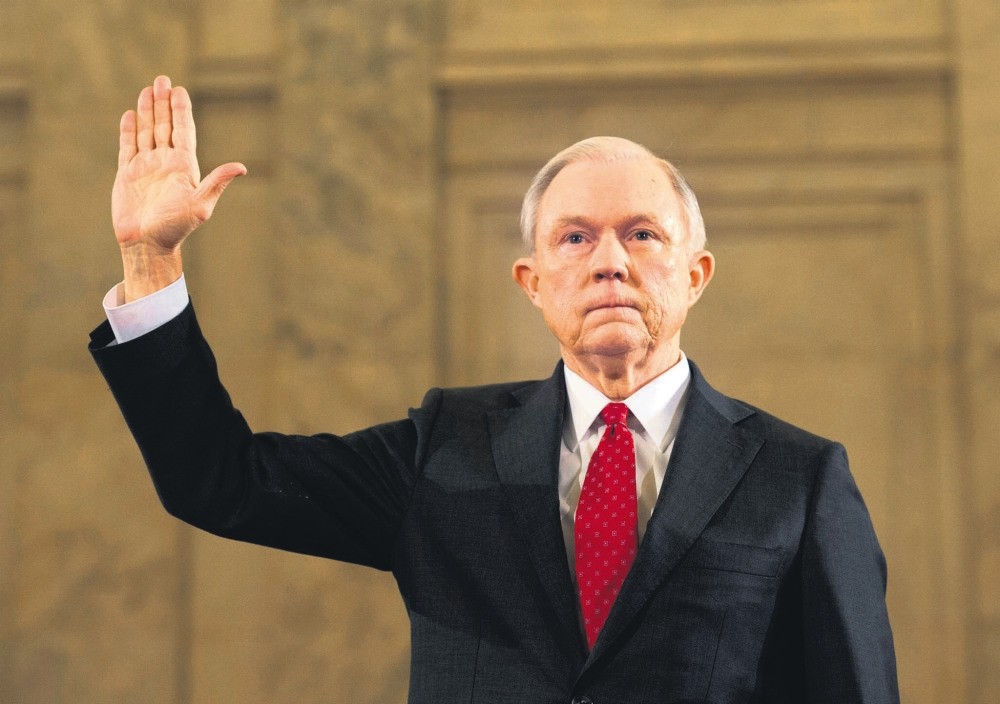 Sen. Jeff Sessions is sworn in before the Senate Judiciary Committee during his confirmation hearing to be Attorney General of the United States, in Washington, DC. (AFP Photo)
by Angelos Berberakis Mar 04, 2017 12:00 am

For the past six months, the Trump team has been accused of coordinating with Russia. These accusations have already claimed Flynn and now target Sessions and Kushner

Even before the election had concluded, the Trump campaign had been accused of coordinating actions with the Russian government in an effort to undermine the Clinton campaign. The narrative goes that Russia wanted Donald Trump in office, so they decided to hack the DNC and release embarrassing, compromising information regarding Hillary Clinton and her inner circle.

After Trump's 306 Electoral College victory on Nov. 9, the Federal Bureau of Investigation and the Office of the Director of National Intelligence published two reports during the transition period that gave new life to accusations that the "hacks" were orchestrated and executed by Russian government-linked forces. The National Intelligence Council even asserted that Russia purposefully used RT and Sputnik as pro-Trump propaganda. These reports, however, failed to provide sources as they were mostly classified and were thus easily brushed off by the Trump team as mere slander perpetrated by the defeated Democrats. Other reports that came after had claims so baseless they were thought to be the work of Internet trolls baiting the intelligence community.

Anti-Trumpers fervently hope to link the Trump campaign to Russian-connected hackers who allegedly were behind the leaked DNC emails.

After Trump was inaugurated and became president of the United States on Jan. 20, the Russian connections narrative again resurfaced.

On Nov. 18, Trump announced that Lieutenant General Michael Flynn would serve as National Security Advisor in his coming administration. According to leaks from the intelligence community, Flynn had discussed former President Barack Obama's sanctions against Russia, which Flynn later denied to Mike Pence. It was not a crime since Trump had not yet taken office; however, it was highly inappropriate since policy was discussed.

Lieutenant General H.R. McMaster, known for his service in the Gulf War, Operation Enduring Freedom and Operation Iraqi Freedom, has since taken the position of National Security Advisor. He is also a critic of the Vietnam War, authoring "Dereliction of Duty" in 1997 in which he criticized high-ranking military leadership during the conflict.

Commenting on Flynn's resignation, on Feb. 14, White House Press Secretary Sean Spicer stated: "We got to a point not based on a legal issue, but based on a trust issue where a level of trust between the president and General Flynn had eroded to the point where he felt he had to make a change. The issue here was that the president got to the point where General Flynn's relationship - misleading the vice president and others - or the possibility that he had forgotten critical details of this important conversation had created a critical mass and an unsustainable situation. That's why the president decided to ask for his resignation, and he got it."

Flynn had spoken to Russian Ambassador Sergey Kislyak, the same ambassador that the Trump-appointed Jeff Sessions is now being grilled over. Sessions is essentially accused of the same thing by the anti-Trump narrative: that he unlawfully coordinated with Russian government officials. During Sessions' confirmation hearing, the Russian issue came up regarding the Trump campaign, and he testified that he did not have connections with the Russian government. The question was about the Trump campaign specifically. The then-Alabama senator had met with several ambassadors in his capacity as a member of the Senate Armed Services Committee; therefore, his answer was truthful as he was answering in the context of the Trump campaign.

On Fox News' Tecker Carlson Tonight show, Sessions explained that he had had a discussion with Kislyak regarding Ukraine and that there was no inappropriate conversation over the campaign as non-political professionals were present during the meeting as well. Sessions' spokeswoman Sarah Isgur Flores stated: "There was absolutely nothing misleading about his answer. Last year, the senator had over 25 conversations with the foreign ambassador as a senior member of the Armed Services Committee, including the British, Korean, Japanese, Polish, Indian, Chinese, Canadian, Australian and Russian ambassadors. He was asked during the hearing about (alleged) communications between Russia and the Trump campaign, not about meetings he took as a senator and a member of the Armed Services Committee."

On March 2, Sessions, after having met with ethics officials from the Department of Justice, decided to recuse himself from any investigations regarding the campaigns, including the probes on Clinton. "My staff recommended recusal," he stated, adding: "They said that since I had involvement with the campaign I should not be involved in any campaign investigation. I have studied the rules and considered their comments and evaluation. I believe those recommendations are right and just; therefore, I have recused myself in the matters that deal with the Trump campaign."

Jared Kushner, husband of Trump's daughter, Ivanka, holds the position of senior advisor to the president. As such, he met with Kislyak to "establish a line of communication" between Russia and the upcoming American administration. It is not improper for transition officials, like Kushner, to meet with foreign officials; in fact, it is a common practice.

The FBI is still investigating everything that had to do with the campaigns, but at this point that is all that is concretely known, so any malaise media and Democratic allegations and conspiracy theories regarding collusion between the Trump team and the Russian government are essentially unfounded.
RELATED TOPICS