Clashes break out across US between pro and anti-Trump demonstrators 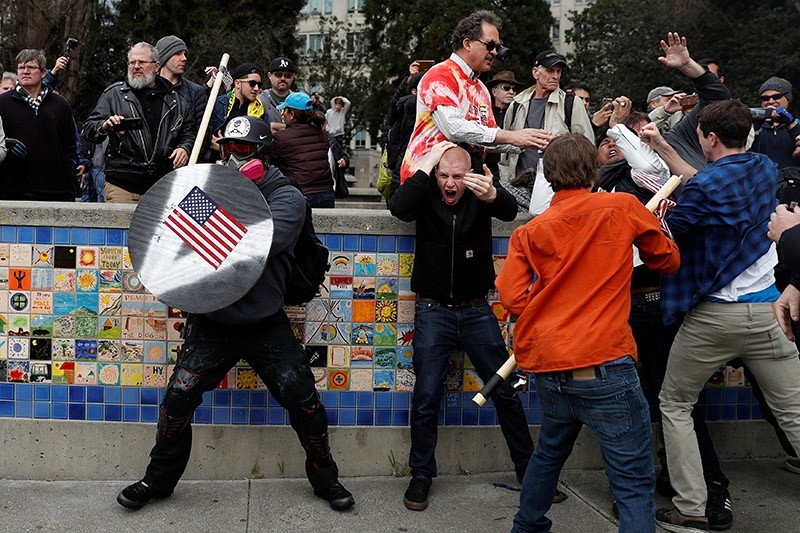 A demonstrator supporting U.S. President Donald Trump (L) holds a shield as a group of men punch a demonstrator during a ,People 4 Trump, rally in Berkeley, California March 4, 2017. (Reuters Photo)
by Compiled from Wire Services Mar 05, 2017 12:00 am

U.S. police said 10 people were arrested after President Donald Trump supporters and counter-protesters clashed during a downtown rally in the famously left-leaning city of Berkeley during ''March 4 Trump'' rally, organized all across the U.S., California that turned violent and left seven people injured on a day of mostly peaceful gatherings in support of the U.S.president across the country.

At a park in Berkeley, across the bay from San Francisco, protesters from both sides struck one another over the head with wooden sticks and Trump supporters fired pepper spray as police in riot gear stood at a distance.

Some in the pro-Trump crowd, holding American flags, facedoff against black-clad opponents

The police department says five people were arrested Saturday for battery, four for assault with a deadly weapon and one for resisting arrest.

It says officers confiscated a dagger, metal pipes, bats, pieces of lumber and bricks. The department says the seven injured people were evaluated, but none needed nor wanted to go to a hospital.

An elderly Trump supporter was struck in the head and kicked on the ground.

Organizers of the so-called Spirit of America rallies in atleast 28 the country's 50 states had said they expected smaller turn-outs than the huge crowds of anti-Trump protesters that clogged the streets of Washington and other cities the day afterthe Republican's inauguration on Jan. 20.

Elsewhere, in Washington, the state patrol says four demonstrators were arrested Saturday in the state capital of Olympia at a rally in support of President Donald Trump, KOMO-TV reports. The TV station says about 225 people attended the pro-Trump rally and a group of about 150 people against Trump staged a counter-protest.

Authorities did not say if the people arrested were pro-Trump or anti-Trump. The station reports that the demonstrators are accused of assaulting a police officer. The state patrol tells KOMO that while no troopers were injured during the rally, a sergeant drove himself to the hospital to get checked out after a demonstrator threw an unknown substance at him.

Similar clashes and police crackdowns were also reported elsewhere in the U.S., including Virginia and Pennsylvania.