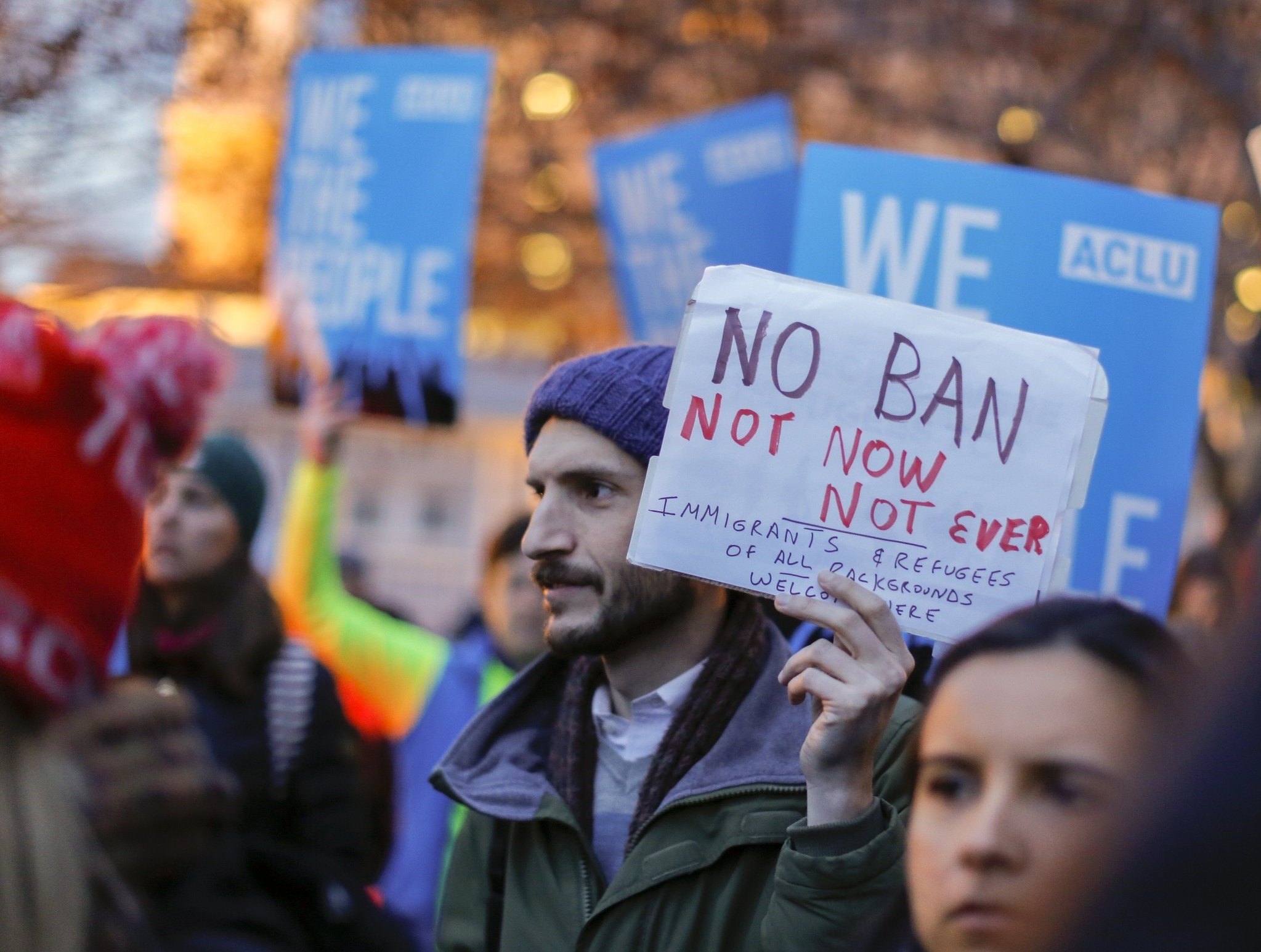 A person holds placards during a protest against US President Donald J. Trump's revised Executive Order. (EPA Photo)
by Compiled from Wire Services Mar 17, 2017 12:00 am

The U.S. government said on Friday in a court filing they would appeal a ruling by a federal judge in Maryland that halted portions of President Donald Trump's March 6 executive order temporarily banning the entry of refugees and travelers from six Muslim-majority countries.

The Department of Justice said it would appeal the ruling to the 4th U.S. Circuit Court of Appeals in Richmond, Virginia.

Speaking Wednesday evening at a rally in Nashville, Tennessee, Trump called the ruling in Hawaii an example of "unprecedented judicial overreach" and said his administration would appeal it to the U.S. Supreme Court. He also called his new travel ban a watered-down version of the first one, which he said he wished he could implement.

The Justice Department filed a brief notice Friday saying that it would appeal the Maryland ruling to the U.S. Court of Appeals for the 4th Circuit. A day earlier, White House spokesman Sean Spicer said the government planned to seek clarification of the Hawaii order before appealing to the 9th Circuit. That circuit is where a three-judge panel unanimously declined to reinstate Trump's original travel ban when it was put on hold by a Seattle Judge last month.

Despite the legal victories for critics of the ban, it's far from clear that they will continue to win. A different panel of judges in the 9th Circuit will probably hear the appeal of Hawaii's case. And on Wednesday, five judges signed a dissent criticizing the court's decision not to reconsider and throw out the panel's ruling on the original travel ban.

"Whatever we, as individuals, may feel about the president or the executive order, the president's decision was well within the powers of the presidency," Judge Jay Bybee wrote for the five.

When federal courts in Hawaii and Maryland blocked Trump's revised travel ban from taking effect, the judges spelled out their major concern: the unusual record of statements by the president and his advisers suggesting the executive order's real purpose was "to discriminate against Muslims", in violation of the Constitution's ban on officially favoring or disfavoring any religion.

Neither U.S. District Judge Theodore Chuang in Maryland nor Judge Derrick Watson bought the administration's reasoning that the travel ban is about national security.

"The history of public statements continues to provide a convincing case that the purpose of the second executive order remains the realization of the long-envisioned Muslim ban," Chuang wrote.

Watson criticized what he called the "illogic" of the government's arguments and cited "significant and unrebutted evidence of religious animus" behind the travel ban. He also noted that while courts should not examine the "veiled psyche" and "secret motives" of government decision-makers, "the remarkable facts at issue here require no such impermissible inquiry."

"For instance, there is nothing 'veiled' about this press release: 'Donald J. Trump is calling for a total and complete shutdown of Muslims entering the United States,'" he wrote, referring to a statement Trump issued as a candidate.

But the scope of the rulings differed. In a challenge brought by Hawaii, Watson blocked the federal government from enforcing its ban on travel from six mostly Muslim countries and its suspension of the nation's refugee program. Chuang only blocked the six-nation travel ban, saying it wasn't clear that the suspension of the refugee program was similarly motivated by religious bias.

A federal judge in Seattle on Thursday ruled that his order blocking Trump's original travel ban does not apply to the revised executive order because there are enough differences between the two.

Judge James Robart noted that Washington and several other states have also asked him to block the revised ban. He said he would rule on that request at a later date.