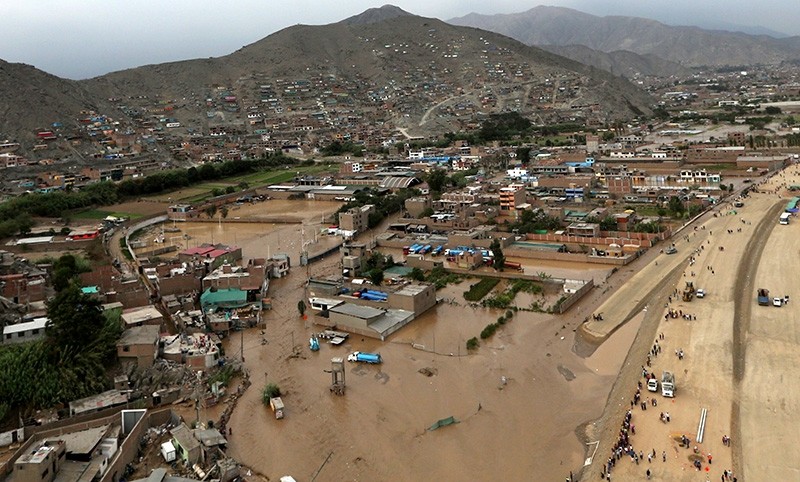 The number of people killed in Peru following intense rains and mudslides wreaking havoc around the Andean nation climbed to 67 Friday, with thousands more displaced from destroyed homes and others waiting on rooftops for rescue.

"We are confronting a serious climatic problem," President Pedro Pablo Kuczynski said in a statement broadcast live Friday afternoon. "There hasn't been an incident of this strength along the coast of Peru since 1998."

The highly unusual rains follow a series of storms that have struck especially hard along Peru's northern coast, with voracious waters inundating hospitals and cemeteries, and leaving some small villages entirely isolated. On Thursday, the National Police rescued eight people who had been trapped for three days in Cachipampa and removed the body of an 88-year-old man killed in the floods. In the highlands along the department of La Libertad, dramatic video showed crashing water inundating several buses and trucks, killing at least five people. Rescuers were searching Friday for survivors.

Even Peru's capital city of Lima, where a desert climate seldom leads to rain, police had to help hundreds of residents in an outskirt neighborhood cross a flooded road by sending them one-by-one along a rope through choppy waters. The muddy current channeled down the street after a major river overflowed. Some residents left their homes with just a single plastic bag carrying their belongings.

In total, more than 65,000 people in nearby Huachipa were unable to either go to work or return to their properties.

"There's no way to cross," said Henry Obando, who was rescued after leaving the factory where he works and making his way toward a rooftop where officers created a zip-line to cross. "Many people are trying to get to their homes."

The storms are being caused by a warms of the surface waters in the Pacific Ocean and are expected to continue for another two weeks. Kuczynski declared Peru's Central Highway in a state of emergency Friday and announced he would be boosting funds for reconstruction. He said he was optimistic the country was in a strong position to make a swift recovery but urged residents to use caution.

"This hasn't ended," he warned. "And it will continue for some time more."

On Friday, drinking water was cut off throughout most of Lima, spiking the price for bottled water and creating long lines at city tanks. U.S. Embassy helicopters typically used to eradicate coca crops in the Amazon were redirected to help in rescue efforts.

"People are desperate," said Doris Meza, who lives in one of the Lima districts most heavily inundated by the floods. "Water is entering everyone's homes. There aren't cars and drivers are charging whatever they want."

Gov't increases budget to cope with the flooding

The government of Peru is hiking the 2017 budget by three percent in order to fund emergency and recovery efforts as the Andean nation grapples with deadly downpours and extreme flooding.

Peru's Finance Minister Alfredo Thorne said the 4.4 billion sol ($1.35 billion) increase, which will be published in an urgent decree on Saturday, would not affect his 2017 fiscal deficit target of 2.5 percent of gross domestic product.

The decree will also create a special tax exemption for companies that donate food and other goods for emergency efforts, Thorne said.

Kuczynski, a 78-year-old economist, said Peru has not seen such extreme rains since the powerful global El Nino weather pattern of 1997-1998.

Before the floods, Kuczynski's government had been working to counter the impacts of a corruption scandal that has delayed its plans to boost domestic demand with infrastructure projects.

Thorne told Reuters he did not expect the extreme weather to prompt a downward revision to official growth estimates of 3.8 percent for 2017 and 4.3 percent for 2018.

The floods might even help bolster economic growth starting in the second quarter if the government can orchestrate a rapid reconstruction effort, despite the damages wrought, said Pedro Tuesta, the chief Latin American analyst for 4Cast and a Peru native.

"Peru may have fewer assets but the flow of production could be larger," Tuesta said. "But it all depends on the government response."

About half of Peru has been declared in emergency to expedite resources to the hardest-hit areas, the government said.

The extreme weather could fan inflation as some food prices have risen on supply disruptions from farming regions.

The floods have destroyed 1,250 km (777 miles) of highway and blocked parts of the main road linking the interior of the country to Lima, according to the civil defense institute.

More than 56,000 acres of crops have been damaged, including in areas that grow grapes, mangoes and bananas for export.

The South American nation of over 30 million has plenty of extremes: its Pacific coastal deserts in the west are interrupted by the steep, soaring Andes, famed for the Inca people and Machu Picchu in the south. Further east, Peru has hot Amazon basin lowlands.

The tremendous steepness of the mountains combined with many areas that are rocky and sandy but lack the level of topsoil found in more temperate places, mean fewer trees are there to stop mudslides.

After weeks of heavy rain came sweeping toward the coast, it filled many riverbeds in coastal areas that went from empty to overflowing in no time. Some residents on the outskirts of the capital of 10 million people awoke Friday to the realization their bedrooms were filling with water.