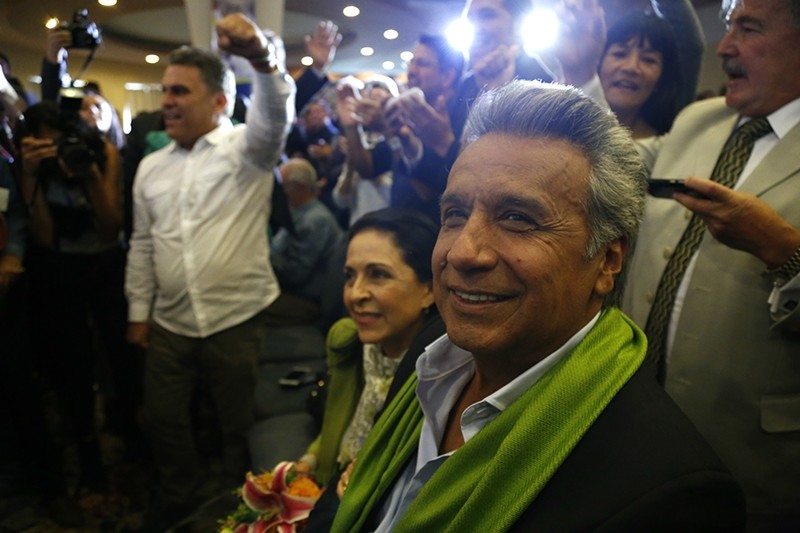 Ecuador's paraplegic president-elect Lenin Moreno will become a rare head of state to use a wheelchair when he takes office next month, stirring hope for disabled people worldwide.

Leftist Moreno, a 64-year-old former vice president, lost use of his legs after he was shot two decades ago during a robbery while he was buying bread with his wife.

Following a difficult recovery, he says he choose to "continue living" and wrote nearly 10 motivational books, including one called 'Laugh, Don't be Ill.'

A former U.N. envoy on disability and accessibility, Moreno will become one of the most high-profile disabled leaders since former U.S. President Franklin D. Roosevelt, who was confined to a wheelchair because of polio as he led the country during the Great Depression and World War Two.

"It's an honor that @Lenin is Ecuador's new president," the Colombian association for people with physical disabilities tweeted. "Many congratulations."

During his tenure as vice president to outgoing leftist president Rafael Correa, Moreno's hallmark policies centered on improving the lives of disabled Ecuadoreans.

He helped build a database of disabled people so they could receive medical treatment tailored to their needs and pushed for the government to provide a monthly stipend for families who care for a disabled relative.

For Ecuador's estimated 400,000 people with physical, mental, hearing, or visual disabilities, Moreno is nothing short of a hero.

Disabled supporters often filled the first spots around the stage during his campaign across the country that includes Andean plateaus, a sweltering coast, and the Galapagos Islands. An aide would wheel Moreno onto stage, where he often broke into song to the delight of flag-waving supporters.

"The fact Lenin lives and breathes the same situation means he understands what we live day to day in a completely different way," said Jorge Camacho, 34, at one rally, sitting in a wheelchair he has used since a traffic accident 15 years ago.

"I think it's so important he represents us at this level."

But Moreno's critics have warned he overpromised. While officials say Ecuador is recovering from a recession last year, low oil prices are still pressuring the export-dependent economy.

Many in the middle class feel that while poor Ecuadoreans have received many stipends under the decade-long leftist rule, they have been hobbled by excessive taxes.