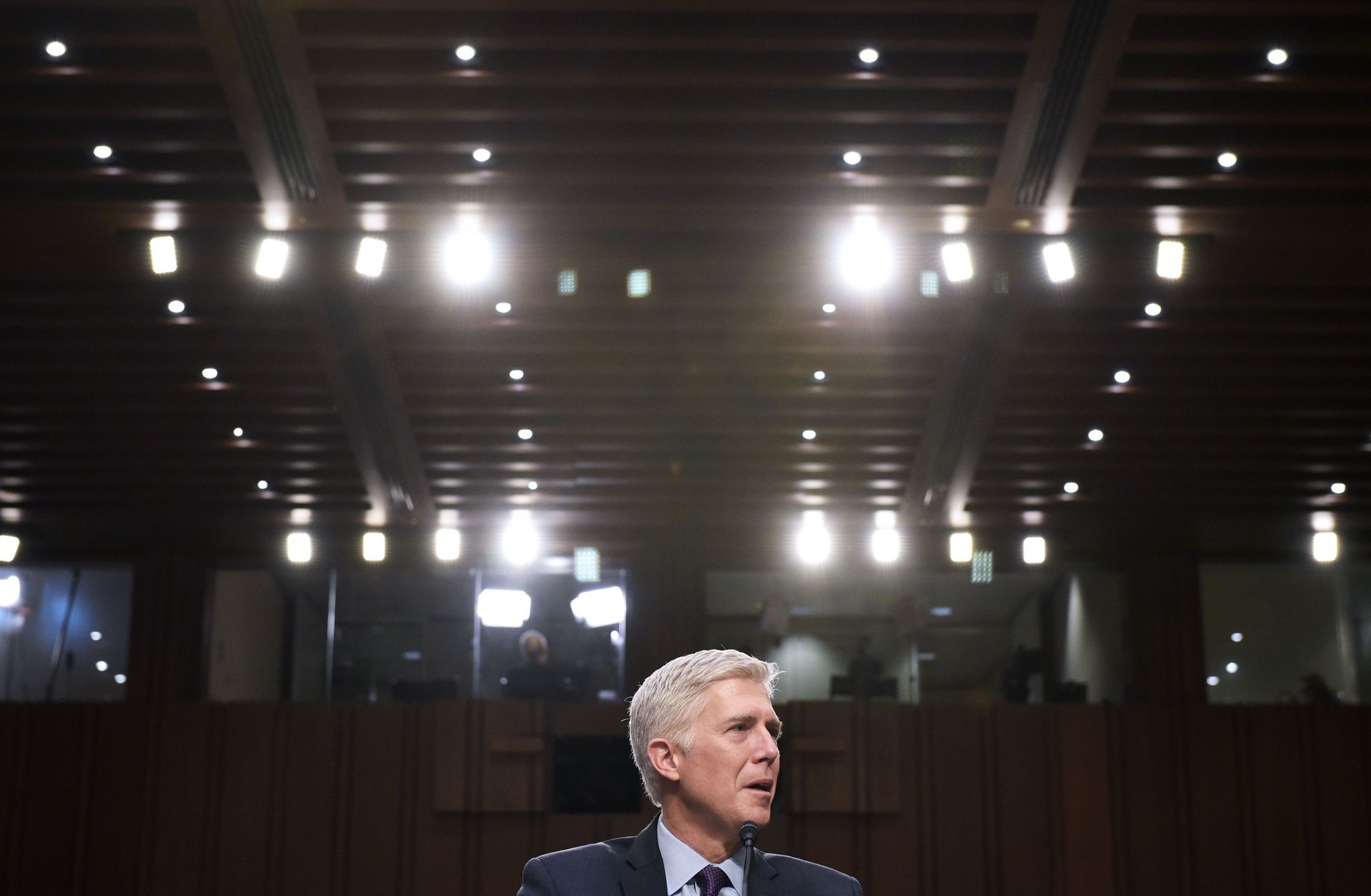 Neil Gorsuch testifies before the Senate Judiciary Committee on his nomination to be an associate justice of the US Supreme Court. (AFP Photo)
by Associated Press Apr 03, 2017 12:00 am

The U.S. Republican and Democrat senators are on a collision course over Neil Gorsuch, President Donald Trump's nominee to the Supreme Court. The Judiciary Committee narrowly backed the 49-year-old appellate court judge on Monday, but Democrats secured the 41 votes to try to block the choice on a filibuster.

Short of the 60 votes in the 100-seat Senate to press ahead, Majority Leader Mitch McConnell, R-Ky., is likely to change the parliamentary rules for Supreme Court nominees, lowering the threshold to a simple majority. Such action has been called "the nuclear option" because of its probable impact on Senate traditions of bipartisanship.

WHAT IS THE NUCLEAR OPTION?

Under that option, nominations could be approved with a simple majority in the 100-member Senate. Now, it takes 60 votes to clear parliamentary hurdles and set up an up-or-down vote on the nominee.

This procedural maneuver has recent precedent. In 2013, Democrats were in the majority under the leadership of Sen. Harry Reid of Nevada and upset about the blockage of President Barack Obama's nominees to a powerful appellate court. Democrats pushed through a rules change lowering the vote threshold on all nominees except for the Supreme Court from 60 to a simple majority.

The Supreme Court was exempted as part of a deal bringing along Democrats reluctant to change the rules.

At the time, McConnell warned Democrats the strategy would backfire: "I say to my friends on the other side of the aisle, you will regret this, and you may regret it a lot sooner than you think."

Before 1975, it was even tougher for presidents to get their nominations through because two-thirds of the senators present and voting had to agree to move forward.

WHY IT WOULD BE EXPLOSIVE

Such a rules change on Supreme Court nominees would be a momentous change for the Senate, which traditionally operates via bipartisanship and consent from all senators. Some believe it could begin to unravel Senate traditions at a hyper-partisan moment in politics and perhaps end up in the complete elimination of the filibuster even for legislation, which would mean an entirely different Senate from the one that's existed for decades.

Senate experts note that the filibuster is not enshrined in the Constitution and filibustering nominees is a relatively recent phenomenon. Cloture — the procedural motion to end a filibuster — was attempted for the first time on a nominee in 1968 after President Lyndon Johnson tapped Abe Fortas as chief justice of the U.S., according to the Congressional Research Service.

The cloture attempt failed and the nomination was withdrawn.

McConnell is an institutionalist who has made clear he does not favor invoking the nuclear option, but he has repeatedly said Gorsuch will be confirmed.