Colombia probes cause of mudslides killing 290, despite apparent signs 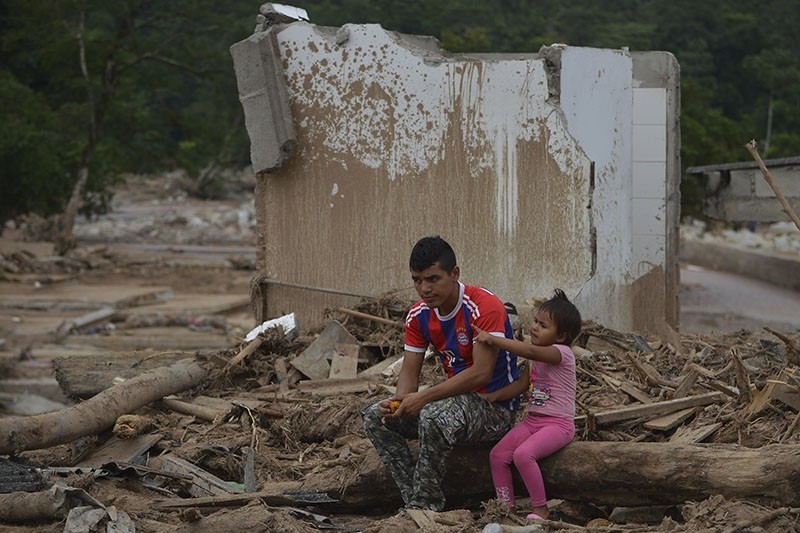 A man and his daughter are in the middle of the rubble by a mudslide caused by heavy rains in Mocoa, Putumayo department, Colombia on April 4, 2017. (AFP Photo)
by Compiled from Wire Services Apr 05, 2017 12:00 am

The number of people killed in southern Colombia's massive mudslides climbed to 290 on Wednesday, as officials investigated how the horrific disaster might have been prevented.

In addition to the dead, 332 people were injured in landslides that buried the Colombian town of Mocoa after flooding caused by days of torrential rains.

Mocoa was home to 70,000 people, about 45,000 of whom were affected by the disaster, according to the Red Cross. Hardest-hit by the tragedy are impoverished neighborhoods populated with residents uprooted during Colombia's five-decade-long civil war.

Authorities have opened an investigation to determine what sort of "preventive and corrective action" ought to have been taken to prevent the disaster, prosecutors said.

Meanwhile, looting has become a problem in some areas. Local officials urged the government to dispatch more police and troops to secure the region and prevent the looting of abandoned homes.

"What the mudslides didn't carry away, the thieves did," one survivor of the disaster, Juan Luis Hernandez, 33, told AFP in the devastated San Miguel neighborhood of Mocoa.

People were caught off guard when a devastating flash flood surged through a small city in southern Colombia, but not everyone was surprised.

Government agencies, land use experts, and environmental organizations had said for years that Mocoa could face dangerous flooding. Many who lived in the most vulnerable areas were aware of the warnings, even if they didn't heed them. And yet the city continued to spread into the floodplains west of downtown.

"Unfortunately, in Colombia we don't have a good assessment of risk, or good land use policies to prohibit people from settling in areas like these," said Marcela Quintero, a researcher with the International Center for Tropical Agriculture, one of the organizations that raised the alarm about deforestation in the area.

Mocoa was vulnerable because of its location, amid a confluence of rivers in the wet subtropical Amazon region of southern Colombia. The danger had grown worse as trees were cut down for cattle ranching and other agriculture, removing critical protection against flooding and landslides. Then came an influx of new residents, many fleeing the violence from the government's long fight with guerrilla forces.

When a month's worth of rain fell in a single night late Friday and early Saturday, the long-predicted disaster had arrived.

Sixty-eight-year-old Deya Maria Toro, who moved to Mocoa 12 years earlier, said she realized what was happening in time and managed to flee to safety. "I woke up at 9 p.m. with this sensation: Is this when the avalanche comes?"

Many others didn't react in time.

Three of the six rivers surrounding Mocoa overran their banks. A wall of muddy brown water and tree limbs raced through the streets, destroying homes and carrying away cars and appliances like driftwood. At least 279 people, many of them children, were swept away. More than 2,700 people who lost their homes were in shelters Tuesday and at least 200 people were still unaccounted for amid the wreckage.

It was one of the worst natural disasters in Colombia in recent years, and the finger-pointing started quickly. Headlines told of the "disaster foretold," a reference to "Chronicle of a Death Foretold," the 1981 novella by the late Gabriel Garcia Marquez, the country's most famous writer. Some media cited a 1989 report prepared by the Ministry of Agriculture, which outlined the scenario that played out over the weekend and recommended flood-control measures.

The Corporation for the Sustainable Development in the Southern Amazon, which has an office in Mocoa, has been warning of the danger as far back as 1995, when the government built a power station that was knocked out by the weekend's flood. The group says that similar disasters have occurred over the years in the area, the most significant in 1962.

A Catholic priest in Mocoa, the Rev. Omar Parra, said in an interview on radio station LA FM that he was dismissed as "paranoid" when he told local officials three years ago that the Taruca River was spilling over onto people's land and would soon burst. "It was a tragedy foretold and the authorities didn't do what they should have done," he said.

People in the city were also quick to lay blame, even when they acknowledged knowing that the steep, forested mountains looming above the river by their homes was a potential threat. "It's the government's fault for letting us build homes here," said Carlos Garces, who came to Mocoa more than a decade ago with his young son and wife. "Everyone knew that it was going to flood but nobody did anything."

The national attorney general's office announced Tuesday that it was questioning the mayor of Mocoa and other officials to determine if any action, or inaction, on their part was responsible and whether an investigation is warranted. President Juan Manuel Santos met Tuesday in the city with the director of the Corporation for the Sustainable Development in the Southern Amazon.

It's not clear that even with the warnings Colombia could have done much about the situation in Mocoa. The country only emerged about a decade ago from a period of intense drug violence and a wave of kidnappings tied to its long civil war. Santos signed a peace deal last year with the largest of the insurgent groups, the Revolutionary Armed Forces of Colombia.

By some estimates, nearly half the population of Mocoa, a city of about 40,000, had come to escape violence in other parts of the country.

It also might have been hard to get people out. Jaime Martinez, a 38-year-old construction worker whose home was left in ruins, said he and others didn't take the threat seriously enough. "People were warned. It was known that the mountain was coming but nobody did anything because we don't pay attention to rumors," Martinez said.

Santos has pledged to rebuild Mocoa and make it better than before, though the government has not yet said whether that includes moving people out of the flood zones. Those who study the region say what's needed are better land-use policies aimed at preventing the deforestation that takes away the best natural protection from flooding, and will be even more critical if climate change brings additional rainfall.

"The most important thing here is that people should not settle again in areas that are very high risk and prone to flooding and that measures are put in place to conserve the areas upstream," Quintero said. "With those two things we can mitigate the risk."