Trump's actions have deeply divided the base that got him elected 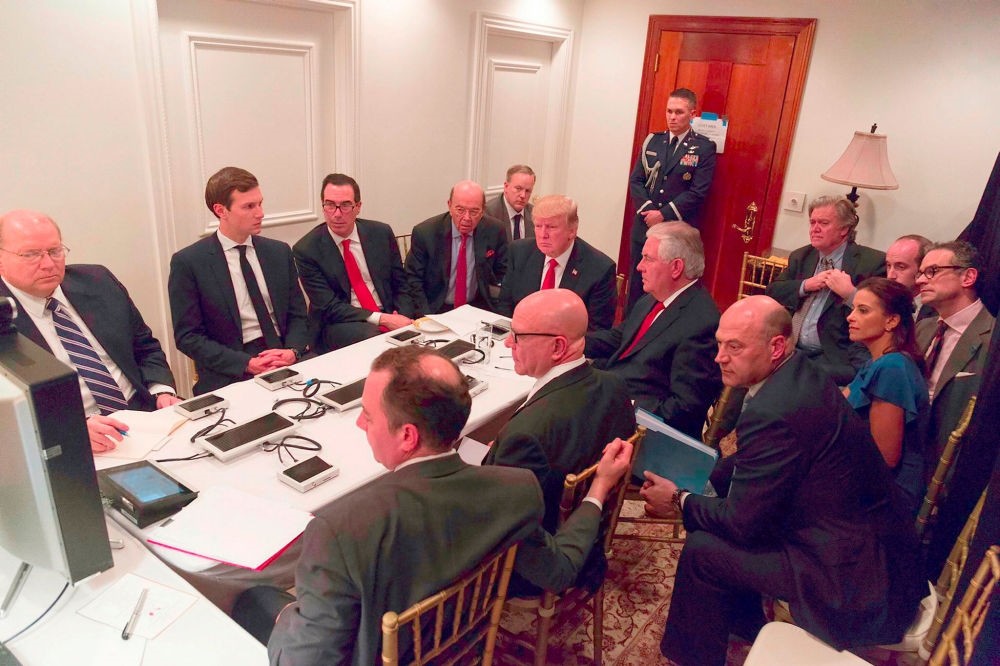 U.S. President Donald Trump receiving a briefing with his closest advisors on the Syria military strike from the National Security team via secure video teleconference on April. (AP Photo)
by Angelos Berberakis Apr 14, 2017 12:00 am

U.S. President Donald Trump started out as a wild card candidate, daring to speak out about topics his opponents would not even think of bringing up during the hotly contested 2016 campaign. Issues such as the massive trade deficit with Mexico and China, illegal immigration, business leaving the United States and much more were all brought to the table by presidential candidate Trump.

All these topics would probably not have been as controversial some decades ago as they are today, but a dislike towards foreign intervention was one of Trump's biggest points during the campaign, which put him in staunch opposition not only with Democrats but the neoconservative Republicans in his own party as well.

A couple of years before he announced he was running, Trump made a series of tweets, which in the eyes of a lot of the people who got him elected have come back to haunt him after his decision to drop 59 Tomahawk missiles on a Syrian government air base.

"If the U.S. attacks Syria and hits the wrong targets, killing civilians, there will be worldwide hell to pay. Stay away and fix broken U.S."

During the campaign and the early days of his Presidency, Trump repeatedly said he had no interest in starting "World War III over Syria," including saying: "We have bigger problems than Assad. [...] "Let Syria and Daesh fight. I look at Assad — and Assad looks better than the other side."

His anti-interventionist comments did very well with both Democrat and Republican voters, but politicians from both parties seemed to oppose Trump's "America First" policy.

The power vacuum created after the toppling of Saddam Hussein's regime in Iraq, which ultimately enabled the rise of Daesh, is still alive in the recent memory of the American people, which is why to many, Trump's anti-interventionist stance was a breath of fresh air. The fall of long-time dictator Muammar Gaddafi in Libya has also escalated into a situation resembling Syria, albeit on a smaller scale, and has strengthened the presence of Daesh and other terrorist groups fighting for power in the North African nation.

British Prime Minister Theresa May met with the American President in January and stated that the U.K.'s "special relationship" with the U.S. "cannot mean a return to the failed policies of the past. The days of Britain and America intervening in sovereign countries in an attempt to remake the world in our own image are over."

Now Trump's decision to launch a strike against Syrian government forces has come as a surprise to even some of his strongest backers, many of whom now feel betrayed regardless of whether they believe Bashar al-Assad gassed his own people or not.

What is truly interesting is that with one move, Trump has managed to split both his opponents and his supporters into several groups. Democrat "Never-Trumpers" praised the decision, while others saw it as an act of war. Freedom Caucus Republicans, such as Senator Rand Paul and his father Ron Paul, both strong constitutionalists, opposed the decision; Republican neocons, like Senator John McCain, have praised the decision even though they opposed almost every other major policy decision the president has or is planning to make.

In another show of the peculiarity of our age, white nationalist and Alt-Right figurehead Richard Spencer organized an anti-war protest in front of the White House following Trump's Syria strike, and Antifa anarchists showed up to protest the Alt-Right protesters.

Trump's disenfranchised base hopes that this was a one-off strike; purely retaliation to the use of chemical weapons, an action many do not even believe was perpetrated by the Assad regime.

A conservative commentator and author reflected on the situation, saying: "We have never succeeded at turning a Third World dictatorship into a paradise. The history of these things is that removing a Middle Eastern strongman always makes things worse; for example, in Iran, Iraq, Libya, and Egypt. We leap in, thinking we're helping the poor devils under the thumb of a dictator and then the new tribe takes over and oppresses everyone else, usually much more brutally, while hating us even more than the old tribe did."

She went on to say that Trump should return to his pledge to be the "President of America, not the President of the world," a slogan Trump himself championed during the transition period.
RELATED TOPICS