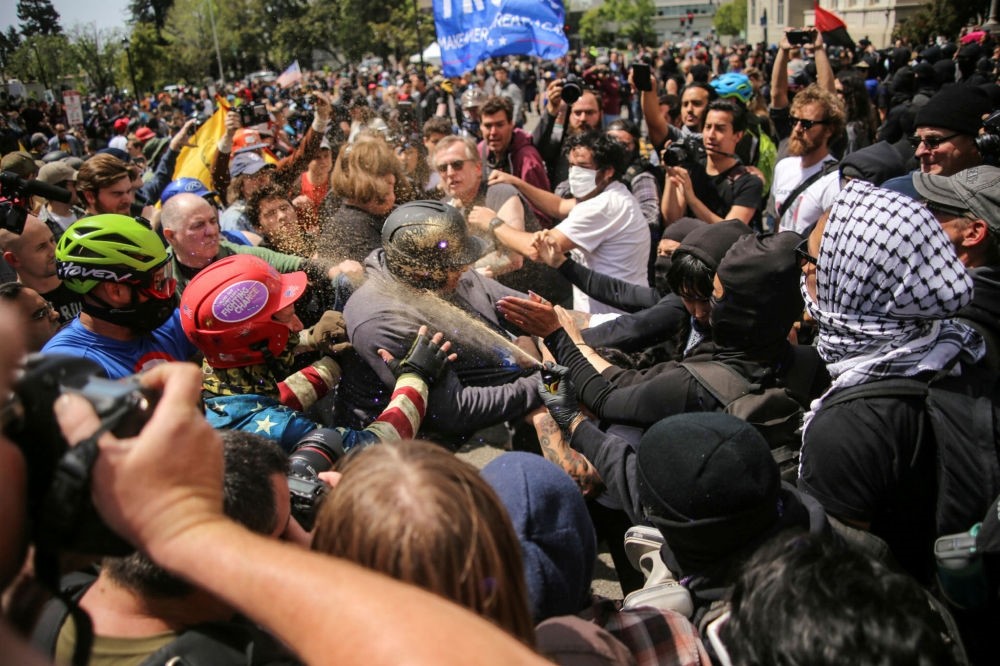 Trump rally members and Antifa protestors clash on the streets of Berkeley, California, April 15
by Angelos Berberakis Apr 18, 2017 12:00 am

Berkeley has seen more than its fair share of increasingly violent rallies and counter-protests, however, in a surprising turn of events, police did not interfere most of the time

In February, not even a month after Donald Trump's presidential inauguration, a large mob of the violent "Black Block," a group made up of self-portrayed anarchists and communists, tried and succeeded in shutting down an event organized by conservative author and former Breitbart editor Milo Yiannopoulos at Berkeley University.

They held up anti-free speech signs and other banners saying "Become Ungovernable" and "This is War." Video footage shows the hooded suspects isolating people who they perceived to be "Trump supporters" and "Neo-Nazis" and mercilessly beating and kicking them in the streets.

"Liberals get the bullet too" wrote a communist on the walls of Berkeley next to a spray-painted hammer and sickle.

Now Antifa, having introduced violence into political debate, is reaping what it has sown.

The Berkeley Antifa Facebook page organized a counter-protest to a local Trump rally, saying that the "Pro-Trump rally in Berkeley, California on April 15 is a Nazi rally."

Police had already set up fragile barriers to separate the two groups, however video footage shows the anarchists, all dressed in black as if they were fighting for Daesh, trampling down the barriers and breaking through to the other side.

The Trump rally members, holding "Free Speech" placards, looked as distinctive, however instead of wearing specific outfits, they wore American flag shirts, Spartan and soldier helmets, as well as many other distinguishing apparel. The most important distinction is that unlike almost every Antifa protestor, almost none on the other side wore face-concealing masks.

A member of the pro-Trump rally stood up with a megaphone and advocated the first amendment rights such as the right to assembly and the right to free speech. He also distinguished the position of the "White nationalists" who were there to "infiltrate" their movement. The message was, essentially, pro-constitutionalism, pro-universal rights and a total rejection of identity politics.

The rally became violent as Antifa began pushing trash bins to use them as road block and light them on fire and then hurled bricks, firecrackers and M-80 explosives to the groups of the Trump rally.

Members of both groups engaged in violence in a vicious circle of offense and subsequent self-defense. Videos and photographs show bloody noses and several sets of pepper-sprayed eyes. Top-down videos portray a chaotic image.

In what was a strategic blunder for Antifa, they decided to throw a smoke bomb, however, the wind was going towards their direction and forced them to flee.

As Antifa was routing, Trump rally members began playing their drums and marched towards them. Several American patriotic songs such as the Battle Hymn of the Republic were playing as well.

A member of Antifa stole an American flag but Trump rally members reclaimed it and captured a Communist flag in return. Another member of Antifa, who attacked a Trump supporter and subsequently got punched between the eyes, wrote on her Facebook page before the rally that she was "determined to bring back 100 nazi scalps."

So where exactly was the police? Independent cameramen found officers in their squad cars on the outskirts of the rallies.

"How come you guys are hanging back?" asked a rally member. "That would be a great question for the Chief of Police," answered a visibly frustrated officer.

After the smoke cleared, police made 21 arrests, 20 of whom were from the Antifa bloc. The Trump rally member who got detained is known as "Based Stickman" for yielding a large stick and a shield. He made a name for himself in a previous Berkeley riot for defending an elderly Trump supporter, pepper-sprayed by Antifa, by hitting protestors in the head.
RELATED TOPICS