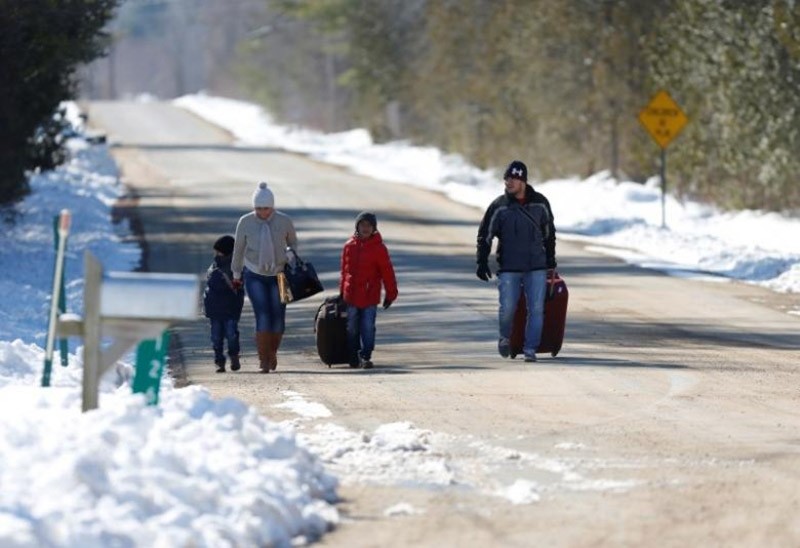 Canadian authorities caught 887 asylum seekers crossing unlawfully into Canada from the United States in March, nearly triple the number in January, according to numbers released by the government Wednesday.

This brings the total number of asylum seekers caught walking across the border to 1,860 so far this year. The new statistics suggest those numbers could rise further as the weather warms.

Canada is on track to see the highest number of asylum claims in six years, given the pace of claims filed so far, as increasing numbers of people cross into Canada to make refugee claims in the wake of U.S. President Donald Trump's election and his crackdown on refugees and illegal immigrants.

Under the Canada-U.S. Safe Third Country Agreement, Canada is required to turn asylum seekers away if they try to file refugee claims at land border crossings. But if people cross the border in between formal crossings, they are taken into custody and questioned by both police and border authorities, then allowed to file claims and stay in Canada while they await the outcome.

Refugee advocates have argued that were it not for the Safe Third Country Agreement, people would file claims at border crossings instead.

The people caught crossing unlawfully comprise a fifth of everyone who has filed asylum claims in Canada so far this year but they loom large in Canadian politics, with the federal government taking fire for its wait-and-see approach. Nearly half of the people surveyed in a Reuters/Ipsos opinion poll released in March wanted to deport people illegally crossing into Canada from its southern neighbor.

"The majority of irregular migrants are holders of visas for the United States," according to a statement released Wednesday from the office of Canada's Public Safety Minister Ralph Goodale.

"Canadian authorities are managing the increase in asylum seekers in a sound and measured way. ... To be clear - trying to slip across the border in an irregular manner is not a 'free' ticket to Canada."

Almost three-quarters of the asylum seekers caught crossing so far this year were taken into custody in Quebec, the government data showed. Roxham Road, which straddles Champlain, New York and Hemmingford, Quebec, has become such a common spot that photographers cluster there and would-be refugees refer to it by name.

Most of the others were taken into custody in Manitoba and British Columbia - 331 and 201, respectively.

Police said Wednesday they have charged 43-year-old Michelle Omoruyi with human smuggling and conspiracy to commit human smuggling. Police allege they found Omoruyi driving nine west African asylum seekers across the U.S. border into the prairie province of Saskatchewan Friday night. The nine asylum seekers have filed refugee claims and are not in custody.