5 people, including children killed by house fire in NYC 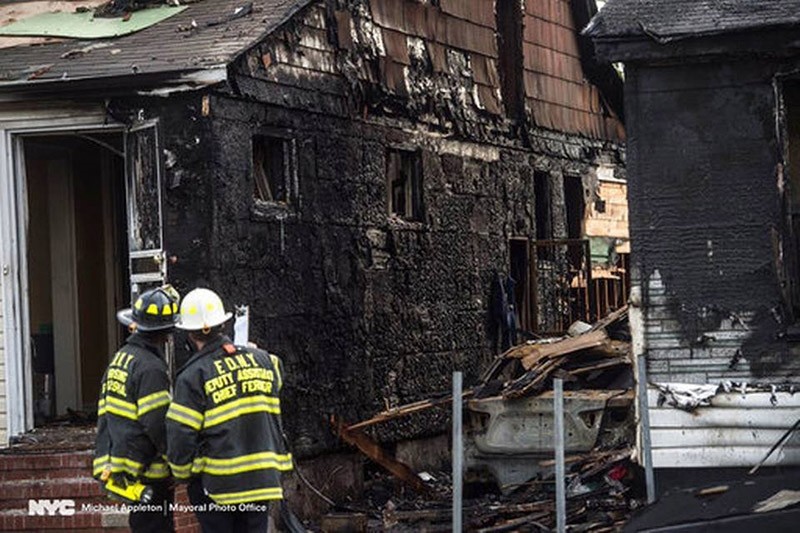 Investigators are scouring for clues about what sparked a deadly, fast-moving house fire that killed five people, including three children, on a sunny spring afternoon.

The fire broke out Sunday afternoon, on a street full of single-family homes in the middle class neighborhood of Queens Village, a neighborhood near Belmont Park, which hosts the Belmont Stakes, the final leg in horse racing's Triple Crown. Television news footage showed flames chewing through the roof of the two-story home and roaring in upstairs rooms of the house as smoke poured from it.

"It was a fire that moved very, very quickly, and the loss was horrendous," said Mayor Bill de Blasio. "This is the devastation of a family," he said, adding: "There's a lot we need to know about what happened here."

There was no immediate theory on what started the blaze. A burned-out car was found behind one of the homes, and witnesses reported hearing loud booms, but Fire Commissioner Daniel Nigro said it didn't appear there was an explosion.

Nigro said a passing motorist saw someone tumble from a window as smoke billowed, and called the fire department. The victim, a roughly 46-year-old man, fell onto a porch roof and then a lawn and survived, Nigro said.

The wood-frame home burned rapidly and was already engulfed in flames by the time firefighters arrived. They struggled to reach some of the victims who were as high up as the attic, a "super-human" task for firefighters to reach people in a home engulfed by such a massive fire, Nigro said. They managed to bring a 2-year-old and someone else from the attic where they had been trapped, he said. But they were too late to save them.

Officials were still trying to piece together who the victims were, and how or if they were all related. The victims ranged in age from 2 to 21, plus one adult who was somewhat older, fire officials said.

A neighboring home also caught fire and was badly damaged, but no one was inside at the time. Four firefighters suffered minor injuries; no other people were injured.

Neighbor Dorothy Murray told reporters that when she looked out her door and saw the fire, "I could have fainted."

"The fire was so intense — there's no way in the world nobody could go over there to save nobody," said Murray.

She said she babysat sometimes for one of the children — "cute little fellow," she said. "He's adorable."

First-responders carried a limp child from the wreckage.

"It was the worst thing I've ever seen in my life," neighbor Foster McPhee, 67, told the New York Post. "The guy who was carrying the baby out, you could just see the stress on his face. I'm just emotional about it because I'm a grandfather and I have kids, too."

Firefighters tried to save the family even as the rescuers mourned one of their own, firefighter William Tolley, who died Thursday after falling five stories while battling a blaze in Queens.

The fire was the deadliest in the nation's biggest city since March 2015, when a house fire in Brooklyn killed seven children, all siblings. That fire was touched off by a hot plate.

By nightfall Sunday, neighbors who'd been standing in horror outside had gone back into their homes, and first responders had blocked off the street as they continued to investigate.

Brenda Lewis, who lives six houses down the fire scene, said she was still in shock. With her iPad in hand, she stood in the evening cold, showing the neighbors the videos she took earlier in the day. "It was something," she said.