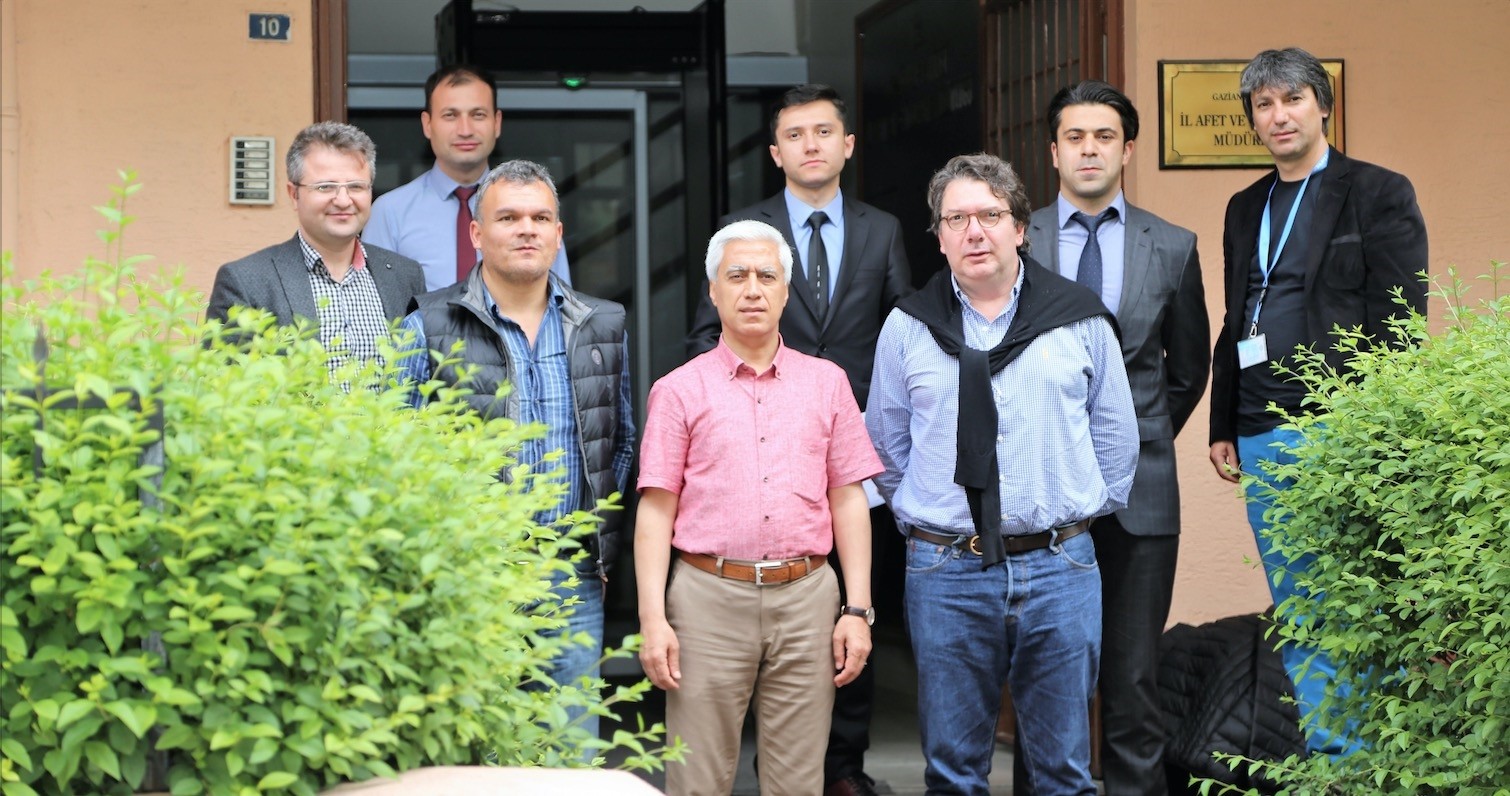 Colombian high-level delegation led by presidential adviser Juan Carlos Restrepo Piedrahita, third from the right, met with Turkish Cooperation and Coordination Agency (Tu0130KA) officials in a week-long visit to Turkey.
by Yusuf Selman İnanç May 15, 2017 12:00 am

Since the internal conflict in Venezuela started yielding a serious refugee problem, neighboring Colombia has asked for Turkey's help in dealing with the influx with the Turkish model has proved to be the most successful in dealing with Syrian refugees

Colombia has been exhausted with the war that has killed around 300,000 people and left 45,000 others missing. The country is now facing a serious refugee problem with neighbors Venezuela facing an internal conflict that has displaced 7 million people.

The Latin American country, which previously showed its support for Turkey's efforts in solving the conflict in bordering Syria, is asking for help from Turkey in dealing with the issue to tackle its growing refugee problem.

With Turkey being the most appreciated and praised country for its successful methods in coping with an influx of refugees after civil war broke out in Syria in 2011, a high-level Colombian envoy has applied to the Turkish Cooperation and Coordination Agency's (TİKA) office in the Colombian capital city of Bogota.

As Ankara welcomed the request, high-ranking Colombian officials paid a visit to Turkey, including the city of Gaziantep where a vast number of refugees have been settled.

After nation-wide protests forced former Venezuelan President Hugo Chavez to step down, the masses began to demand a change in the regime.

The socialist and anti-U.S. Latin American country, with a wealth of natural resources, has been subjected to heavy sanctions and embargos by Western countries; primarily the U.S., as the people slip into poverty and the basic needs of its people, including the lack of supply of durable goods which is worsening the already dire situation.

As protestors take to looting local markets, gas stations and banks, the Venezuelan government has deployed a military presence to the streets and the unrest seems to have no end in sight.

While the government accused international actors of involvement in domestic politics and of financing some certain anti-government groups, some of which seem to be armed, the opposition is asking for a democratic transition and early elections.

With an inflation rate of more than 1,000-percent, the drastic fall in oil prices, in the last two years, have deteriorated the economy.

According to a report by Newsdeeply last month, "Amid shortages in basic goods, from canned food and toilet paper to medication, people line up for hours in the vain hope that they can buy food for the day, often with backpacks stuffed with almost-valueless Bolivar currency notes. The black market for household goods is booming but at exorbitant prices the average Venezuelan cannot afford. Many Venezuelans try to travel to Colombia where the shelves are full."

Unconfirmed reports claim dozens have been killed and many have started seeking refuge in both Brazil and Venezuela. Although there is no verified number, the estimated number of displaced people varies between 50,000 and 1.2 million.

Yet, due to the poor relations Venezuela has with these countries, the borders are generally closed and there is no registration for the refugees at the moment.

Colombia, which has witnessed one of the longest internal conflicts in the last century, has been making attempts for economic development and democracy since the conflict with Revolutionary Armed Forces of Colombia (FARC) ended in the last quarter of last year. 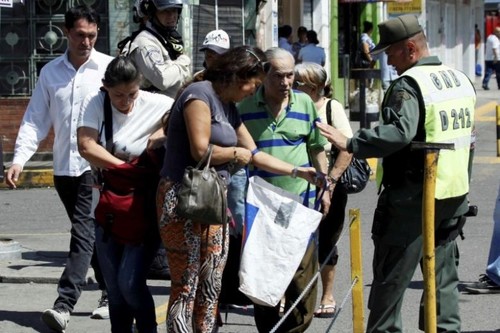 A Venezuelan soldier talks to people as they cross into Colombia over the Simon Bolivar international bridge, in San Antonio del Tachira, Venezuela.

A new law even has recently ratified provisions of the peace agreement that allows former FARC members to be placed in legal politics. What would potentially be a very positive time of the country has become an obstacle overshadowed by the refugee issue.

Yet, taking early steps, the Colombian government has decided to copy the Turkish model in dealing with the issue.

Mehmet Özkan, an associate professor at the Turkish National Police Academy and director of TİKA's Bogota branch, said the Colombian foreign ministry appealed to the office to receive information about Turkey's refugee policy.

After a briefing, the ministry declared its intention to send a delegate envoy to Turkey.

Juan Carlos Restrepo Piedrahita, adviser to the Colombian presidency on security issues, Victor Alfonso Bautista Olarte, the head of the border development and integration department at the presidency and Pedro Felipe Lopez, the head of the National Unit for the Management of the Risk of Disasters, paid a week-long visit to Turkey.

Piedrahita said their envoy was in Turkey to see how the Turkish government dealt with the six-year-long problem and what experiences Ankara has gained.

The presidential adviser stressed that Colombia is need of learning from Turkey's experiences due to the unrest in Venezuela.

He also said Colombian citizens who have fled to Venezuela previously due to the conflict with FARC, may come back to their country along with Venezuelans.

"We want to be prepared as we expect a grand migration wave," he said.

"We have looked at other countries as well, yet we have seen that Turkey is the most successful model," Olarte said.

Underlining that in a very short time Turkey has achieved great success; he said that, "Turkey's approach is not based only on politics but also on humanitarianism. What we saw during our stay is that Turkish institutions as well as Turkish people do their best. Moreover, we have visited the Foundation for Political, Economic and Social Research (SETA) and saw the academic and sociological approach to the issue and have obtained information from the Turkish Education Ministry as well."

Lopez, the head of the National Unit for the Management of the Risk of Disasters also chimed in revealing his astonishment at Turkey's efforts, saying, "There is like a race between Turkish institutions. All of them work towards solving problems with the refugees. Every institution seems free to carry out projects for the refugees. As a result, a very comprehensive approach appears."

Emphasizing the fact that not only the state but also the Turkish people endeavor to embrace refugees, he said that, "One of the most important issues is the brotherhood between Turkish and Syrian people."

Lopez also emphasized that Colombia would copy the Turkish model, which is, according to him, solution-oriented.

On the Turkish side, TİKA's Bogota office director Özkan stated that they were happy to welcome the Colombian delegation and open to sharing any information and experience.

"The nature of the conflicts in Syria and Venezuela is different. However, both of the countries face a similar humanitarian crisis at their borders," he said.

Underlining that Colombia had limited knowledge on the issue, he said, "They wanted to see what kind of system Turkey established in registration, education, health, security, social life in the camps and integration."

Although the number of refugees is not known clearly, he added, "Many people are expected to come. Therefore, Colombia wants to be prepared."

Giving the example of the city of Cucuta which hosts thousands of Venezuelan refugees, he indicated that TİKA would launch projects for the coming refugees, especially for those in the border cities.

He also emphasized Turkey's changing role on the continent and underlined that Turkey appears as a country to potentially benefit from its experiences.

"Turkey and its institutions in Latin America, primarily TİKA, are considered to be a source for inspiration. This will bring about more cooperation between Turkey and the continent. In particular, we can talk about the 'South-South' cooperation between Colombia and Turkey. This cooperation will be more sensible when the share of experience begins," Özkan said.

The number of Syrian refugees living in Turkey has exceeded the sum of the populations of the 15 least populated Turkish provinces. Contributing nearly $9 billion in humanitarian aid during the ongoing Syrian crisis, Turkey's aid for Syrian refugees has been 20 times more than the aid received from international organizations, according to the Prime Ministry Disaster and Emergency Management Authority (AFAD).