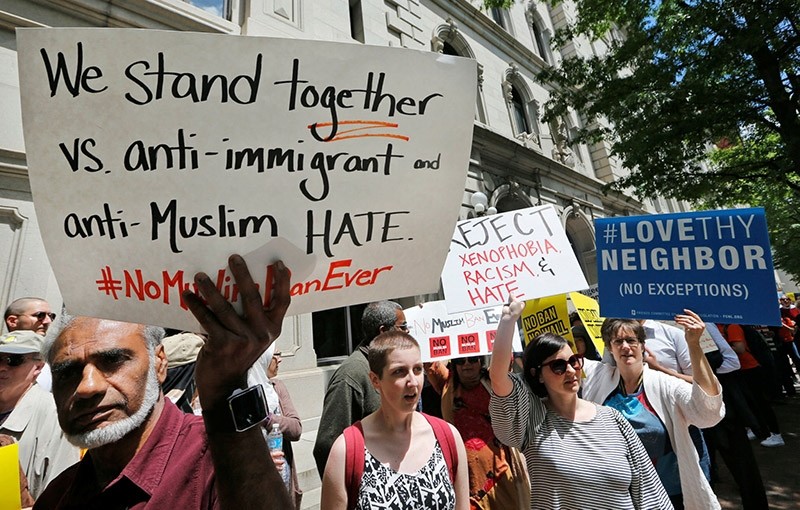 The Trump administration has asked the Supreme Court to immediately reinstate its ban on travelers from six mostly Muslim countries and refugees from anywhere in the world, saying the U.S. will be safer if the policy is put in place.

The Justice Department filing to the high court late Thursday argued that lower courts that blocked the Trump policy made several mistakes, including relying on statements President Donald Trump made during the 2016 campaign.

In a statement, spokeswoman Sarah Isgur Flores said the government was "confident that President Trump's executive order is well within his lawful authority to keep the nation safe and protect our communities from terrorism.

"The president is not required to admit people from countries that sponsor or shelter terrorism, until he determines that they can be properly vetted and do not pose a security risk to the United States."

In January, Trump signed an executive order blocking the entry of people from Iraq, Somalia, Iran, Syria, Sudan, Libya and Yemen. However, this was defeated by legal challenges in the states of Washington and Minnesota.

An altered order -- dropping Iraq and proposing a 90-day suspension of visas for people from the other six countries, as well as a 120-day hiatus on the admission of refugees -- was blocked by a court in Maryland.

A federal judge in Hawaii also sided with the ban's opponents.

On May 25, a federal appeals court in Virginia refused to lift the temporary block, saying the Trump's order "drips with religious intolerance, animus and discrimination".

The American Civil Liberties Union said on Twitter: "We've beat this hateful ban and are ready to do it again."

The Supreme Court filled a 14-month vacancy in April when Neil Gorsuch was confirmed by the Senate.

The U.S.'s highest court now has five conservative and four liberal judges on its bench but its decisions are unlikely to be split along party lines in a complex case that involves debate around the powers of the executive branch and the freedom of religion.