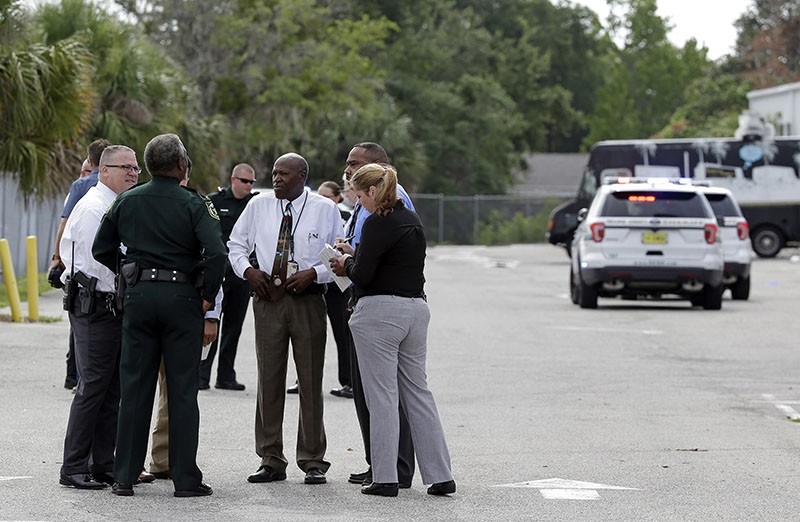 Authorities confer near the scene of a shooting where they said there were multiple fatalities in an industrial area near Orlando, Fla., Monday, June 5, 2017. (AP Photo)
by Jun 05, 2017 12:00 am

Five people were killed in as a former employee raided a workplace and committed suicide in Orlando, Florida, on Monday, while seven people survived with injuries, the Orange County Sheriff said.

John Robert Neumann Jr., 45, was armed with a semi-automatic handgun and hunting knife when he entered a business called Fiamma, which describes itself as one of the world's largest manufacturers of awnings for recreational vehicles.

Orange County Sheriff Jerry Demings described Neumann as a disgruntled ex-employee but said it was not clear why he was fired or what prompted his actions. He was not linked to any militant organizations, the sheriff told reporters.

Most of the victims were shot in the head, some multiple times, he said.

"He was certainly singling out the individuals that he shot," said Demings, who earlier described the shooting as "likely a workplace violence incident."

The victims included Robert Snyder, 69, who was chief of the Fiamma site, according to Todd Bluewater, owner of a neighboring business. Also killed were Brenda Montanez-Crespo, 44; Kevin Clark, 53; Jeffrey Roberts, 57; and a man whose name had not been released by Monday afternoon.

It appeared the shooter was targeting managers, Bluewater told Reuters by phone.

Eight other people at the site when Neumann opened fire were not injured.

The assailant allegedly beat up another employee at the business in 2014, but no charges were filed, the sheriff told reporters.

"It is a sad day for us here once again in Orange County," Demings said.

The shooting took place almost a year after 49 people were killed on June 12, 2016, at the Pulse nightclub in Orlando, the deadliest mass shooting in modern U.S. history. At least 58 people were also injured.

At one point, Neumann told a temporary employee he did not know to leave the premises. He reloaded his handgun, for which he did not have a permit, at least once during the incident and killed himself as deputies were about to enter the warehouse, the sheriff said.

Law officials were seeking a search warrant for Neumann's home in the area, where he lived alone, Demings said.

Neumann was honorably discharged from the Army in 1999 and had a history of misdemeanor criminal offenses, such as possession of marijuana and driving under the influence.

In June 2014, Orange County deputies investigated a report that he battered another employee at Fiamma, but no charges were brought, Demings said.