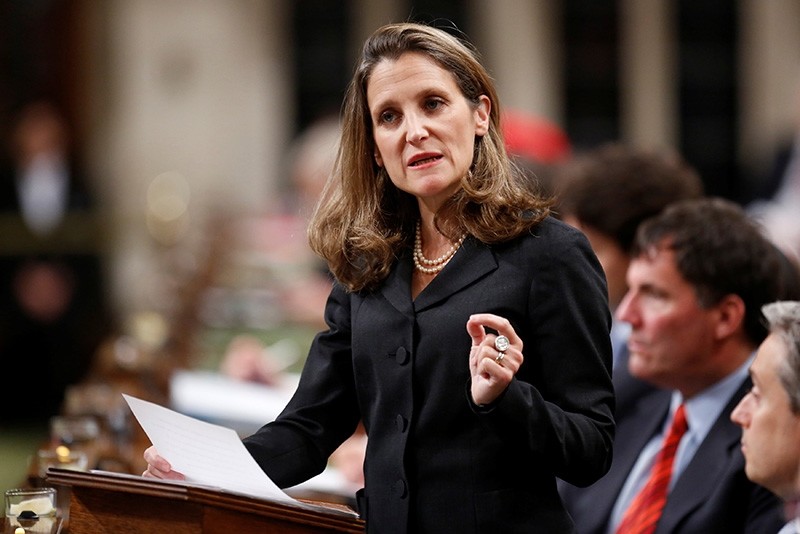 Canada will seek to play a larger role on the world stage as the United States retreats, Foreign Minister Chrystia Freeland said on Tuesday, in remarks underscoring strains between Washington and its closest allies.

Freeland spoke after recent NATO and G7 summits where U.S. President Donald Trump upset leaders to such an extent that German Chancellor Angela Merkel expressed doubts about the reliability of the United States.

Freeland didn't mention Trump, but she made it clear that her speech was a response to his America-first policy.

"The fact that our friend and ally has come to question the very worth of its mantle of global leadership puts into sharper focus the need for the rest of us to set our own clear and sovereign course," Freeland said. "For Canada that course must be the renewal, indeed the strengthening, of the post-war multilateral order."

Canada will seek to support multilateral forums such as the United Nations, NATO, the G7, the G20, the Organization of American States and the Arctic Council, Freeland said.

Canada will host the G7 next year and is "energetically pursuing a two-year term on the UN Security Council," she said.

Speaking a day before the Liberal government is set to unveil its long-awaited defense policy review, Freeland said Ottawa will also reinvest in its military.

"Principled use of force, together with our allies and governed by international law, is part of our history and must be part of our future," Freeland said.

While Canada's geography has meant that it has always been able to count on US self-interest to provide a protective umbrella and that dependence cannot be good for Canadian sovereignty, she said.

"To rely solely on the U.S. security umbrella would make us a client state," Freeland said. "Although we have an incredibly good relationship with our American friends and neighbors, such a dependence would not be in Canada's interest."

Canada will also work to promote free trade and counter protectionist policies that have taken root in the United States, she said.

It will work with the US and Mexico to modernize the North American Free Trade Agreement, and to make "a great trading partnership even better" and seek new trade agreements with CETA as a template.

Freeland also highlighted the promotion of the rights of women and girls, saying they are at the core of Canadian foreign and development policy.