Trump's son fires off tweets in support of his dad 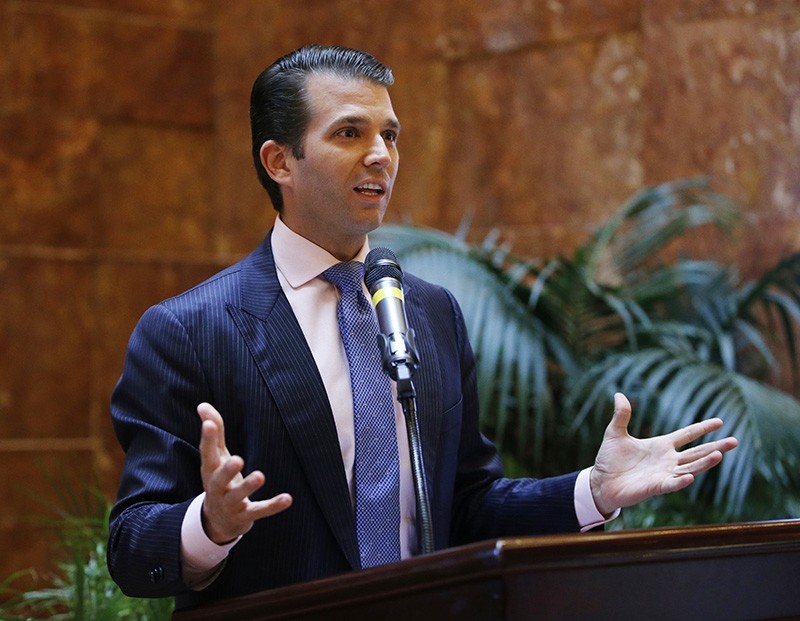 The president's eldest son, whose Twitter feed can at times be as inflammatory as his father's, was a one-man rapid-response team as the fired FBI director testified before a Senate panel Thursday. He delivered denunciations with the same force that made him an effective, if controversial, campaign surrogate and could signal his own political ambitions.

Donald Trump Jr. tweeted more than 80 times Thursday, defending his father and attacking Comey. Trump Jr.'s Twitter barrage was all the more striking when compared to his father's silence, which the president broke with a Friday morning tweet accusing Comey of lying under oath.

Trump Jr. declined to comment Friday about his tweets, leaving unanswered questions as to whether they were urged by the White House, which outsourced its Comey response to the Republican National Committee and the president's personal lawyer.

Trump Jr. has certainly been willing to go on the attack for his father before.

He crisscrossed the United States during last year's election, doing hundreds of interviews on Fox News and local conservative outlets. He attacked "Crooked Hillary," his father's derogatory nickname for opponent Hillary Clinton, and delivered a well-received speech at the Republican National Convention.

That moment sparked speculation about his political future. But while Trump Jr. told The Associated Press this spring that he would not, as had been rumored, be a candidate for governor of New York, he left the door open for a political run down the road.

"Maybe someday," Trump said then. "It's not something I'm doing now. But you never know, it's fascinating stuff."

He's done a number of Republican campaign events since then, including fundraisers in Texas and Indiana and campaigning for a congressional candidate in Montana. But Trump Jr., who along with his brother Eric is running their father's former company, has said he does not discuss the details of politics or their business with the president.

He outpaced the national Republican Party with his Twitter defense Thursday. In particular, he seized on Comey's assertion that he interpreted the president's statement that he "hoped" the FBI would drop its probe into former National Security Adviser Michael Flynn as an instruction.

"Knowing my father for 39 years when he 'orders or tells' you to do something there is no ambiguity, you will know exactly what he means," Trump Jr. wrote.

He also pointed to Comey's revelation that he had asked a friend to pass along to the press memos he had written documenting his interactions with Trump.

"Did I miss something or did Comey just say he asked a friend to leak information to the press?" asked Trump Jr. "Is this a joke?"

It was not the first time his tweets have drawn attention.

During the final months of the campaign, he posted a tweet featuring a bowl of Skittles with a warning: "If I had a bowl of skittles and I told you just three would kill you, would you take a handful?" The tweet went on: "That's our Syrian refugee problem."

The photo, a popular image on the extreme right, quickly drew condemnation and was denounced by the candy company.

A few days later, Trump Jr. linked to a news article posted on the far-right news site Breitbart that suggested Muslim men are "a menace" to Western women and posted a doctored image of himself, his father and several prominent Trump allies next to Pepe the Frog, a cartoon character whose image has been used by white supremacists.

This week, Donald Jr. and Eric Trump announced that their company is launching a new hotel chain inspired by their travels with their father's campaign. The Trump Organization is calling the new mid-market chain "American Idea" and said it will start with three hotels in Mississippi.