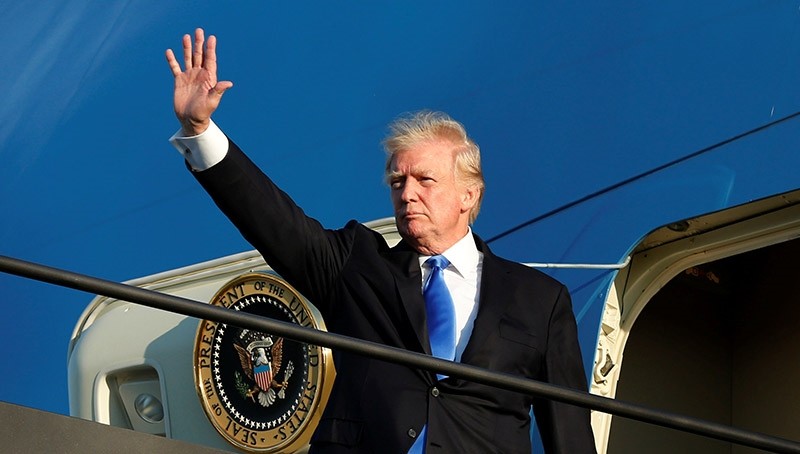 U.S. President Donald Trump waves before his departs from Newark Liberty International airport after a weekend at Trump National Golf Club in Bedminster (Reuters Photo)
by Jun 12, 2017 12:00 am

Officials in Maryland and the U.S. capital Washington will sue President Donald Trump for accepting payments and benefits from foreign governments through his business empire, news reports said Sunday night.

The suit to be unveiled Monday centers on the so-called emoluments clause, which bans U.S. officials from taking gifts or other benefits from foreign governments.

An NGO that centers on ethics issues filed a similar suit in January. But this is the first one presented by government entities.

The announced lawsuit adds to Trump's woes as he grapples with congressional and a special prosecutor's probes into his campaign's alleged ties with Russia, which US intelligence agencies say meddled aggressively in the 2016 election to held Trump win.

Since taking power in January, Trump has turned day to day control over his real estate empire and other assets to his adult sons, but not sold them off as many in America said he should to avoid conflicts of interest.

The lawsuit will be filed Monday by the attorneys general of Maryland and Washington in the U.S. District Court for the District of Maryland, the Washington Post reported.

Maryland Attorney General Brian Frosh said the case is about Trump's failure to separate his personal interests from his presidential duties.

Frosh told the Post that the emoluments clause mandates that "the president put the country first and not his own personal interest first."

A key case in the dispute is a hotel that Trump opened last year by leasing a large, stately building that used to be a central post office, just down the road from the White House.

Aside from the issue of the foreign payments ban, Maryland and Washington complain that the presence of a Trump hotel hurts competing hotels in their jurisdictions.

The Post cited examples of foreign government showing preference for that hotel over others, at what neighboring Maryland and Washington say is their expense.

It said the embassy of Kuwait had planned to hold an event at a Four Seasons hotel but eventually moved it to the Trump property, which is called the Trump International Hotel.