Sessions says he didn't have private meetings with Russians 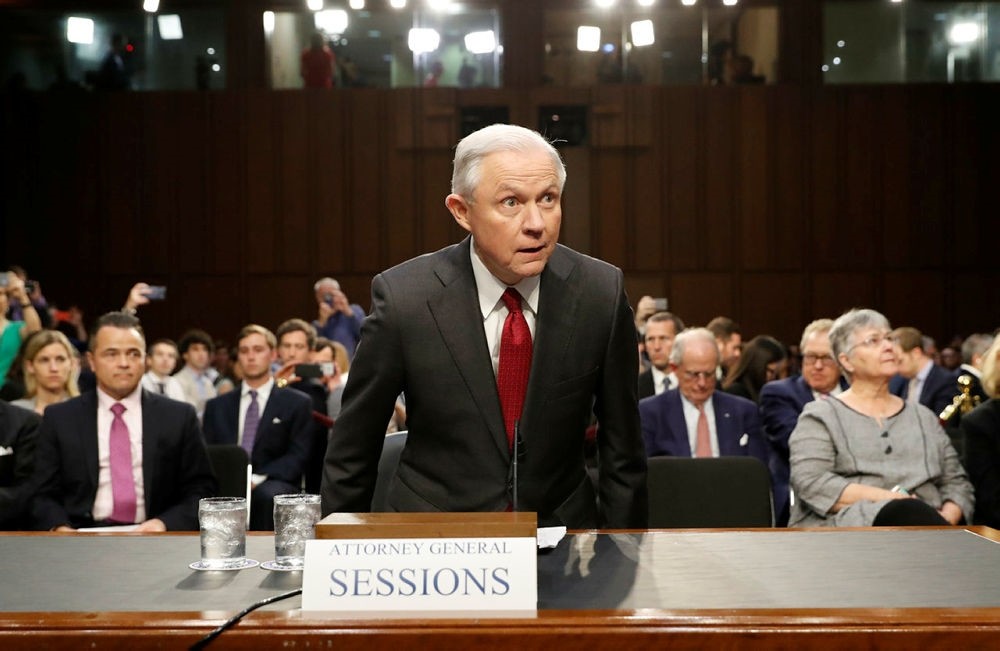 U.S. Attorney General Jeff Sessions denied having ever met with or discussed with Russian officials interference in the U.S. presidential election, calling suggestions of collusion an "appalling and detestable lie."

In closely-watched congressional testimony, Sessions fiercely denounced allegations that he acted improperly during a series of meetings with Russian officials -- or that he knew of any attempt at collusion by a member of the Trump campaign team.

"I have never met with or had any conversations with any Russians or any foreign officials concerning any type of interference with any campaign or election in the United States," he told the hearing of the Senate Intelligence Committee.

"I have no knowledge of any such conversations by anyone connected to the Trump campaign," he added.

"The suggestion that I participated with any collusion, that I was aware of any collusion with the Russian government to hurt this country, which I have served with honor for 35 years, or to undermine the integrity of our democratic process, is an appalling and detestable lie."

The appearance was Sessions's first sworn public testimony since being confirmed as attorney general in February, and comes as political intrigue pulses through the US capital following explosive testimony by ousted FBI director James Comey last week.

The nation's top law enforcement official -- who has recused himself from all ongoing Russia investigations -- has himself become a focal point in congressional probes into the allegations of election meddling, in possible collusion with Trump's team, that have dogged the young administration.

Trump has expressed frustration with Sessions, one of his earliest high-profile campaign backers, but the attorney general's steely demeanor showed he was prepared to push back against outside criticism.

The Justice Department has said Sessions recused himself in March because of his involvement in Trump's campaign, but in his dramatic appearance last Thursday, Comey said the FBI knew of information that would have made it "problematic" for Sessions to be involved.

When asked what those problematic matters could be, Sessions fired back: "There are none! I can tell you that for absolute certainty."

"This is a secret innuendo being leaked out there about me, and I don't appreciate it," he added.

Trump's dismissal last month of former FBI director Comey -- who was overseeing the Russia probe -- has led to questions about potential obstruction of justice.

The attorney general, who recommended Comey be fired, declined to discuss his conversations with the president on the subject, citing a "longstanding policy" that Justice officials not comment on such private discussions.

Rumors have recently circulated that the president may seek to sack Robert Mueller, the special counsel appointed to head the high-stakes Russia investigation following Comey's ouster.

Sessions declined to comment on those reports, stating only that he had "confidence" in Mueller and that it would not be appropriate for him to fire the special counsel.

He also said that since his recusal, "I have no knowledge about this investigation... beyond what has been publicly reported."

Addressing allegations that he had unreported meetings with Russian officials while he advised the Trump campaign, Sessions said he had already acknowledged two encounters last year with Ambassador Sergey Kislyak.

But he denied meeting Kislyak a third time, at an April 27, 2016 reception for Trump at the Mayflower Hotel in Washington.

Although Sessions backed Trump's campaign, he was also one of the first administration officials to fly into turbulence.

Sessions may be under a further cloud after Comey suggested the attorney general may have failed to take appropriate steps to protect the FBI chief from political pressure from Trump's White House.

At the conclusion of a February 14 meeting, the sacked FBI chief testified, Trump urged everyone else but Comey to leave the Oval Office, including Sessions. Comey said the president then leaned on him to halt an investigation into one of his top aides, former national security advisor Michael Flynn.

Comey recalled that he felt "something big" was about to happen, and "my sense was the attorney general knew he shouldn't be leaving."