US House majority whip, several others shot during congressional baseball practice in Virginia 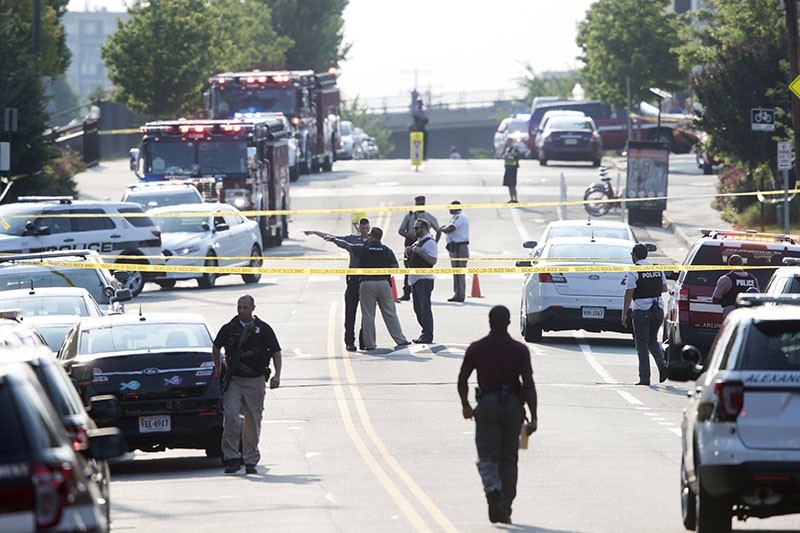 A top House Republican, Steve Scalise of Louisiana, was shot by a rifle-wielding gunman Wednesday at a congressional baseball practice just outside of Washington. Several other people were also believed to have been hit, according to a lawmaker who witnessed the shooting.

A Washington hospital said the congressman shot during a baseball practice is in critical condition following surgery.

MedStar Washington said in a tweet Wednesday afternoon that Rep. Steve Scalise "was critically injured and remains in critical condition." It provided no further details about him.

Scalise was among several people wounded when a rifle-wielding attacker fired on Republican lawmakers on a baseball field in Alexandria, Virginia, outside Washington. The attacker was shot and later died.

The hospital said another victim of the shooting is in good condition. It did not identify the victim.

President Donald Trump said he was "deeply saddened by this tragedy" and called for national unity.

Trump also confirmed that the man who opened fire at the field in Alexandria -- wounding Representative Steve Scalise, two police officers and at least one congressional aide -- has died of his injuries.

"We are strongest when we are unified and when we work together for the common good," the president said in an address to the country from the Diplomatic Room of the White House.

The shooting came amid high political tension in the United States after a vitriol-filled 2016 election campaign.

"We may have our differences, but we do well, in times like these, to remember that everyone who serves in our nation's capital is here because, above all, they love our country," Trump said, calling for the nation to put politics aside.

"Many lives would have been lost if not for the heroic actions of the two Capitol Police officers who took down the gunman despite sustaining gunshot wounds during a very, very brutal assault," Trump said.

"Melania and I are grateful for their heroism and praying for the swift recovery of all victims."

Trump described Scalise as a "very good friend," a "patriot" and a "fighter."

The shooting occurred at a baseball field in Alexandria, Virginia, where lawmakers and others were gathered for a morning practice.

"We were doing batting practice," said Sen. Jeff Flake, R-Ariz. "All of a sudden we heard a very loud shot. The gunman was over by the third base dugout with a clear view of the field." He said the gunman had "a rifle of some sort ... a lot of ammo."

Rep. Mike Bishop, R-Mich., said Scalise was at second base when he was shot.

"I was looking right at him," Bishop told Detroit radio station WWJ. "He was a sitting duck."

Rep. Mo Brooks, an Alabama Republican, said two law enforcement officers were believed to be among the others shot.

Brooks said that Scalise, 51, was down on the ground with what Brooks described as "a hip wound." The Alabama lawmaker said he colleague "crawled into the outfield, leaving a trail of blood."

"We started giving him the liquids, I put pressure on his wound in his hip," Brooks said.

House Speaker Paul Ryan's office said Scalise's wounds were not believed to be life-threatening and that a member of the security detail was also shot.

Scalise is the No. 3 House Republican leader. He was first elected to the House in 2008 after serving in the state legislature.

Katie Filous was walking her two dogs near the field when she heard "a lot of shots, probably more than 20." She said the shooting "went on for quite a while."

Filous said she saw the shooter hit a uniformed law enforcement officer, who she said was later evacuated by helicopter. She said the officer had gotten out of a parked car, drawn a handgun and shouted something to the gunman, who then fired.

Rep. Jeff Duncan said in a statement that he was at the practice and "saw the shooter."