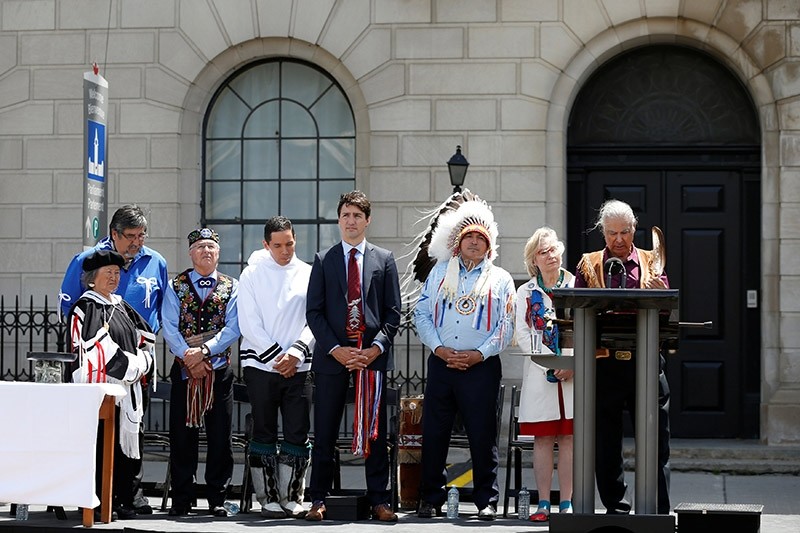 Canada's Prime Minister Justin Trudeau (C) listens to a prayer during an event announcing the creation of a new space for Indigenous Peoples at 100 Wellington Street (Reuters Photo)
by Jun 21, 2017 12:00 am

Canadian Prime Minister Justin Trudeau on Wednesday gifted a former American embassy directly across the street from parliament to Canada's more than 600 tribes, in a symbolic rapprochement with indigenous peoples.

He also ordered that a nearby building housing his offices be stripped of its name, Langevin Block, which is associated with the "cultural genocide" of Canadian aboriginals.

The former embassy handover on a national day celebrating the country's aboriginal population "symbolizes a turning point in Canada's relationship with indigenous peoples," a statement said.

"It provides a concrete marker, in the heart of the nation's capital and facing Parliament Hill, of the importance of indigenous peoples to this country's foundation, to its past and, most importantly, to its future."

How indigenous groups will use the building is still undetermined. Suggestions include designating it as a public space for aboriginal art and cultural events, or as a base for lobbying the government.

The 1930s Beaux-Arts building -- designed by the same American architect who conceived of Washington's neoclassical Supreme Court headquarters -- has sat empty for 19 years, since diplomats moved to a new building a few blocks away.

A former Liberal government planned in 2001 to turn it into a portrait gallery, but that idea was quashed by a subsequent Tory administration.

Though the mahogany paneling, marble walls and an original 1930s elevator are intact, the building will still need a full renovation.

There are holes in the walls and wires dangling from the ceiling, the result of demolition work done in preparation for its use as a portrait gallery.

The Langevin Block, meanwhile, will be renamed the Office of the Prime Minister and Privy Council, Trudeau announced.

It was originally named for one of the fathers of confederation, Hector-Louis Langevin, who played a key role in the establishment of church-run boarding schools.

Beginning in 1874, 150,000 Indian, Inuit and Metis children in Canada were forcibly enrolled in the schools in an integration effort.

Many survivors alleged abuse by headmasters and teachers, who stripped them of their culture and language.

In a speech, Trudeau acknowledged aboriginals' "deep pain in knowing that that building carries a name so closely associated with the horror of residential schools."