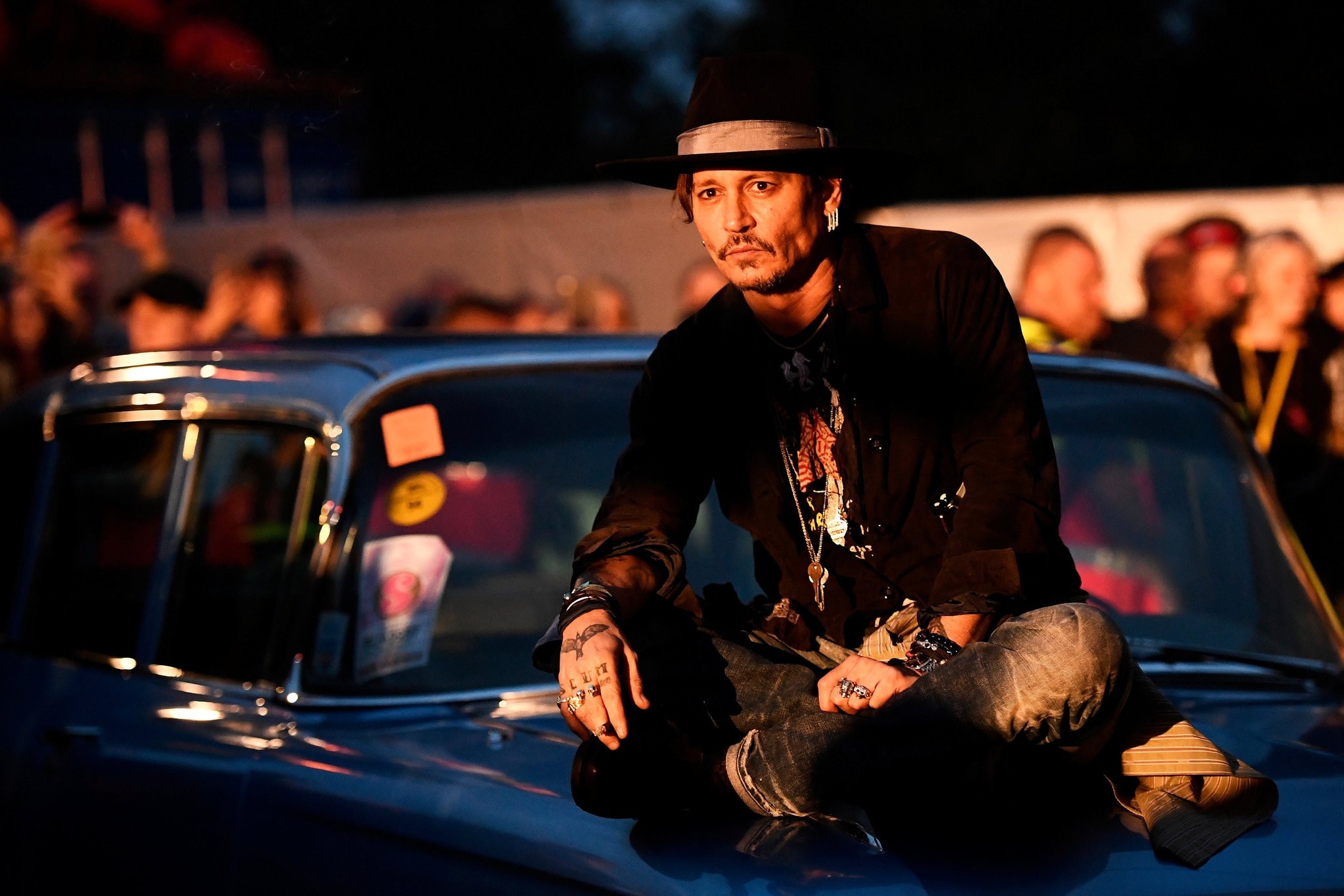 Actor Johnny Depp poses on a Cadillac before presenting his film The Libertine, at Cinemageddon at Worthy Farm in Somerset during the Glastonbury Festival in Britain, June 22, 2017. (REUTERS Photo)
by Compiled from Wire Services Jun 23, 2017 12:00 am

Johnny Depp has sparked controversy for joking about assassinating Donald Trump during an appearance at a large festival in Britain, the latest example of artists using violent imagery when dealing with the president.

"When was the last time an actor assassinated a president?" Depp asked the crowd at Glastonbury Festival, in reference to the death of Abraham Lincoln by John Wilkes Booth in 1865.

The 54-year-old "Pirates of the Caribbean" star then added: "I want to qualify, I am not an actor. I lie for a living. However, it has been awhile and maybe it is time."

However, "The Pirates of the Caribbean" star issued an apology on Friday over his joke about assassinating U.S. President Donald Trump, saying his remarks were in "poor taste."

His remarks drew sharp criticism from supporters of Trump, and Depp on Friday said he intended no malice.

"I apologize for the bad joke I attempted last night in poor taste about President Trump," Depp, 54, said in a statement to People magazine.

"It did not come out as intended, and I intended no malice. I was only trying to amuse, not to harm anyone."

The Secret Service in a statement said Friday it was "aware of the comments in question. For security reasons, we cannot discuss specifically nor in general terms the means and methods of how we perform our protective responsibilities."

Depp was at the festival on Thursday to introduce a screening of his 2004 film "The Libertine." He played Trump last year in a Funny or Die video parody of the businessman's 1987 book, "The Art of the Deal."

Depp's remarks come weeks after The Public Theater in New York was criticized for its production of "Julius Caesar" that portrayed a Trump-like dictator in a business suit with a long tie who gets knifed to death onstage. The theater said it never advocates violence as a solution to political problems.

The show followed condemnation for comedian Kathy Griffin, who lost her job co-hosting CNN's New Year's Eve special and had all her upcoming comedy shows canceled after posing for a photograph in which she gripped a likeness of the president's severed, bloody head.

Musicians have also gone after the White House, with a Snoop Dogg's video of him shooting a Trump-lookalike clown and Moby putting out a video in which Trump resembles a Nazi-like Iron Man who takes over the world with a missile-firing machine shaped like a swastika and dollar symbol.

Trump's election has not quieted many in the arts community who assailed the candidate, with Robert De Niro saying he'd "like to punch" Trump "in the face," Carly Simon repurposing her song "You're So Vain" into an anti-Trump anthem and singer-rapper Will.i.am's damning video "GRAB'm by the ...."

Other presidents have found themselves the target of celebrity ire, including George W. Bush who was attacked by the Dixie Chicks and by Kanye West, who famously said Bush "doesn't care about black people."