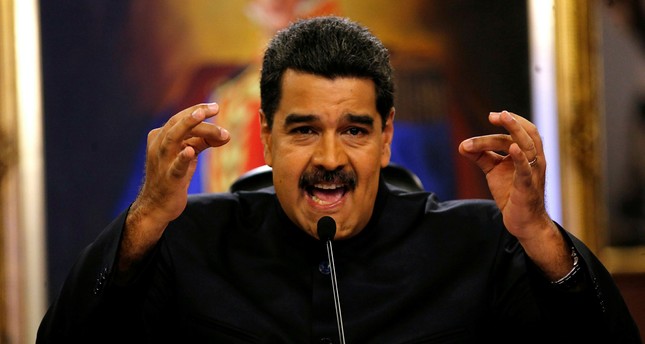 A police helicopter opened fire on Venezuela's Supreme Court and some government buildings in what President Maduro has claimed was a thwarted terrorist attack backed by the U.S. aimed at ousting him from power

Venezuela's army has been put on alert after four grenades were hurled at the Supreme Court from a helicopter, President Nicolas Maduro said Tuesday, in a potentially dramatic escalation of the violence gripping the oil-rich South American country. Venezuela's embattled president has repeated claims of a US-backed coup attempt against him and angrily warned President Donald Trump that Venezuela would fight back against such a move. The helicopter assault comes a day after Maduro announced the arrests of five opponents he accused of plotting against him to clear the way for a US invasion.

The aircraft fired 15 shots at the Interior Ministry, where scores of people were at a social event, and dropped four grenades on the court, where judges were meeting, officials said. However, there were no reports of injuries.

"Sooner rather than later, we are going to capture the helicopter and those behind this armed terrorist attack against the institutions of the country," Maduro said. "They could have caused dozens of deaths," he said.

Venezuela's government said in a communique the helicopter was stolen by investigative police pilot Oscar Perez, who declared himself in rebellion against Maduro.

Turkey condemned the helicopter attack on the government buildings while urging the political tension to "be resolved as soon as possible." "We strongly condemn the attack on the buildings of the Supreme Court and the Ministry of Interior, Justice and Peace that took place in Caracas, the capital of Venezuela. We are relieved that no casualties have been reported in the said attack that targeted important institutions of the country," Turkey's Directorate General of Press and Information said in a statement released yesterday.

The 54-year-old socialist leader has faced three months of protests from opposition leaders who decry him as a dictator who has wrecked a once-prosperous economy. There has been growing dissent too from within government and the security forces. At least 75 people have died, and hundreds more been injured and arrested, in the anti-government unrest since April. Demonstrators are demanding general elections, measures to alleviate a brutal economic crisis, freedom for hundreds of jailed opposition activists, and independence for the opposition-controlled National Assembly legislature. Maduro says they are seeking a coup against him with the encouragement of a U.S. government eager to gain control of Venezuela's oil reserves, the largest in the world.

Earlier Tuesday, Maduro repeated claims of a U.S.-backed coup attempt and angrily warned President Donald Trump that Venezuela would fight back against such a move. "If Venezuela were dragged into chaos and violence... we would fight," Maduro bellowed in a speech to supporters. If a coup prevented his side fulfilling his contested reform plans, he said, "we would achieve it by arms." He said an armed intervention in his country would spark a crisis that would dwarf those caused by conflicts in the Middle East.

Addressing Trump, he said: "You are responsible for restraining the madness of the Venezuelan right-wing."

Addressing a crowd over the weekend, Maduro said detainees would face military trial over an alleged coup plot, backed by Venezuelan opposition leaders and aimed at precipitating a US intervention in the country.

"I am not exaggerating when I say it would have involved the arrival of American ships and troops in Venezuelan waters, on Venezuelan soil," Maduro said.

And on Saturday the head of the Organization of American States dug his heels in a war of words with Caracas, flatly rejecting its demand that he resign. Maduro had suggested that Luis Almagro -- who has criticized the Venezuelan government for violating human rights, interfering in elections and detaining political prisoners -- step down in exchange for the country's continued membership in the regional body. Though Almagro dismissed that notion, the OAS General Assembly was unable to reach agreement on a plan to deal with the instability in Venezuela at a meeting in Cancun last week.