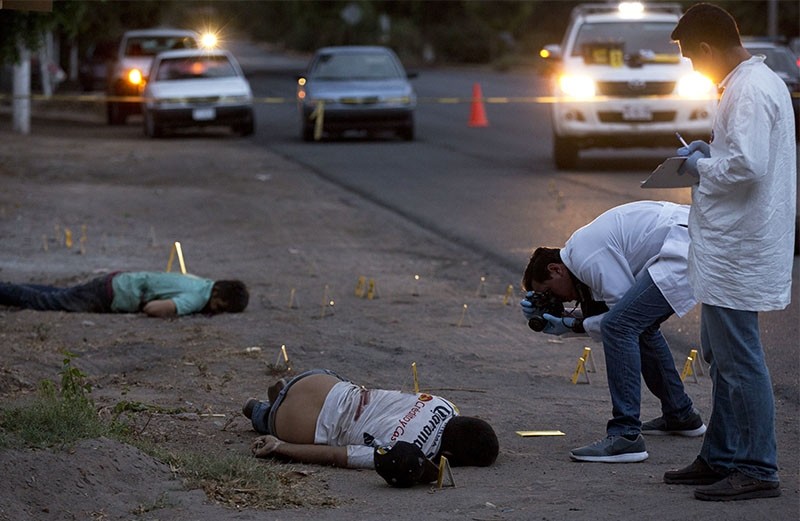 Investigators take pictures at the crime scene next to bodies lying on a road. 59 AK type and AR-15 bullet casings were found in the area. (AP Photo)
by Associated Press Jul 02, 2017 12:00 am

The violence began with a shooting Friday that killed two men near a department store in the town of Villa Union, about 15 miles (24 kilometers) southeast of the beach resort of Mazatlan.

Officials attributed it to warring drug gang members responsible for recent violence in the state, which is home to Guzman's Sinaloa cartel.

"We believe it has to do with the transport of drugs and the fight for terrain, for the areas that these groups are fighting over," Genaro Robles Casillas, the Sinaloa state public security secretary, said at a news conference.

Police were alerted by emergency calls, and municipal officers encountered the suspected attackers as they were riding in several pickup trucks.

A fierce gunbattle broke out in which police killed 17 suspects, officials said. Five municipal police officers were wounded, but reported in stable condition.

Elements of the marines, the army and the federal police also responded to support the local forces.

Sinaloa is the birthplace of a number of Mexico's drug gang leaders, and killings have risen there after Guzman was captured and then extradited to the United States earlier this year to face drug charges.

Security experts say a power struggle has since broken out between opposing factions of the Sinaloa cartel, which also faces challenges from other gangs such as the Jalisco New Generation cartel.

During the first five months of the year, homicides jumped by 76 percent in Sinaloa state compared with the same period in 2016, according to government crime statistics.

The killings include the May 15 slaying of Javier Valdez, an award-winning reporter who specialized in covering drug trafficking and organized crime, in the state capital, Culiacan.

Homicides were also up about 30 percent nationwide in Mexico for the January-May period.