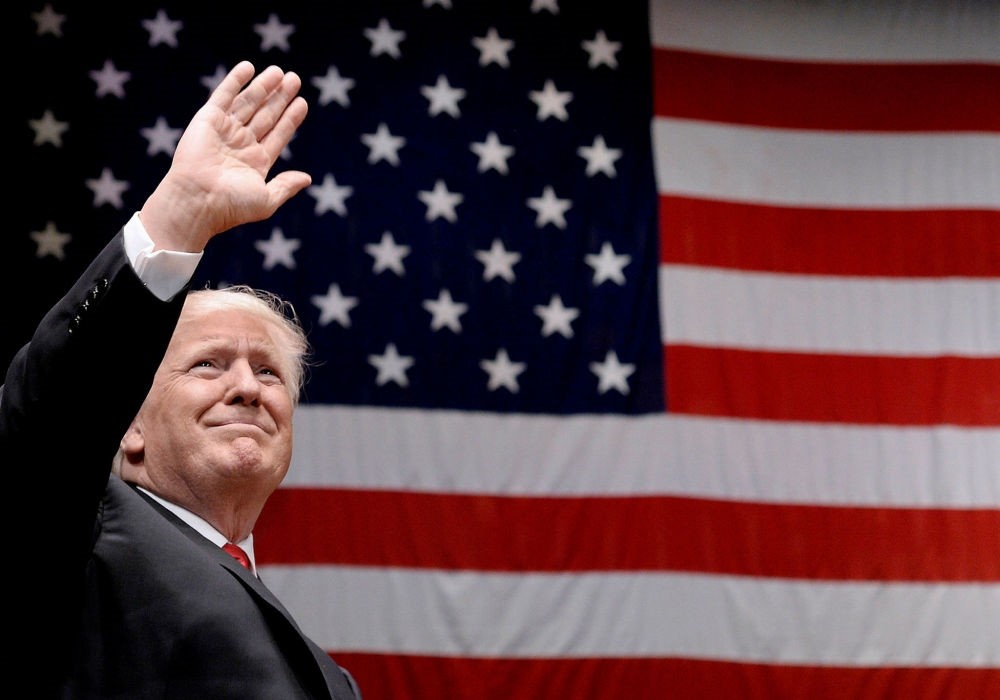 U.S. President Donald J. Trump participates in the Celebrate Freedom Rally at the John F. Kennedy Center for the Performing Arts in Washington, DC, July 1.
by Angelos Berberakis Jul 04, 2017 12:00 am

Unbeknownst to many, President Trump's 'CNN Takedown' tweet is part of what is jokingly being referred to as the "Great Meme War" on the internet

While one might be quick to dismiss the validity of claims that internet memes have any real power, instead of looking at the situation as simply a big joke, it would probably be more practical to look at it as a 21st-century battle for the hearts and minds of the country's youth.

President Donald Trump tweeted an edited Wrestlemania XXIII video of himself body-slamming a person whose head was covered over with the logo of CNN, prompting its pundits to declare the move an attack against the free press.

The 28-second clip from 2007 is part of a larger World Wrestling Entertainment (WWE) video, in which Trump is featured doing various things in humor, including shaving off all the hair of the same person; namely Vince McMahon, whom he had body-slammed and pretended to beat.

Trump was recently engaged in a heated verbal duel with MSNBC media personalities Joe Scarborough and Mika Brzezinski, as well. This is not the first time, and most certainly will not be the last, in which we are seeing the U.S. president engage in a fiery exchange with mainstream media pundits.

Albeit surprising for some, Trump was actually very well liked by the media throughout the 1980s and the 1990s, when he was constantly interviewed by pundits on not only fiscal matters but also political and foreign policy issues.

Following President Trump's announcement that he was running for president in June 2015, however, the media's opinion of him made a full 180, and began to be centered on attacks directed at the president for nearly every single one of his purported points, ranging from immigration and foreign policy to economic and social matters.

When he did announce his bid for Presidency, the internet exploded with memes that either ridiculed or supported him. However, in the early months following his announcement, few people believed that he could actually become the Republican presidential nominee, let alone president. In those early months of his candidacy, for some reason, it seemed that the more things Trump said, the more mainstream "outrage" he incited, thus prompting people to create more and more humorous online material that would be deemed "controversial" as well, thus making Trump more popular.

This wasn't, and apparently still isn't, a one-sided show, however. Not only did Trump himself, whether deliberately or inadvertently, constantly provide the internet with more material to work with through his rhetoric, his body language and various TV clips from over two decades ago, but he also reposted some of these snippets on his infamous Twitter account; thereby stirring more mainstream controversy.

A lot of Trump's support in the social media sector likely comes from those who did not initially or necessarily support him as a candidate, but who have since certainly enjoyed the fallout of all the mainstream media pundits, as every time he has caught flak from CNN or MSNBC he has risen in seeming popularity. Trump has even found himself in trouble with other, more conservative news outlets such as Fox News, as we saw in his wrangling with the network's Megyn Kelly.

It truly has appeared to be Trump versus the World, and a video that he shared on his Twitter account from YouTube certainly made this possibility seem plausible. It was a humorous compilation of Trump "stumping" his opponents, be they Republicans or Democrats, that was cleverly edited for maximum comedic effect. Trump again caught flak for sharing "inappropriate" content. He was also criticized for not taking his position seriously enough, even though he wasn't even the official nominee yet.

He also tweeted a smug-looking cartoon image of himself as Pepe the Frog, a meme that was on the verge of turning obsolete, just as every single one before it, an image that then became infused with not only Donald Trump, but also Alt-Right politics; thereby giving it a spicy and controversial feeling, used to annoy the "normies."

Trump largely won the election just because he was and still is able to bend and break the rules that the large media corporations have to abide by, using his Twitter account and the subsequent media coverage he gains from an ever-more outraged press war.

Trump takes a few seconds to send a Tweet and the media rants about it for over a week. A few weeks ago, he tweeted something that included the word "covfefe," which doesn't mean anything and was just a bad typing error, yet the press couldn't let it go, with conspiracy theorists asserting that it's a coded message to Russia. In fact the situation was so ridiculous that Trump sent another Tweet, taunting the press, saying, "Who can figure out the true meaning of "covfefe" ??? Enjoy!," #covfefe actually became the most trending hashtag globally for that time period.

How does Trump justify his tactics? "My use of social media is not Presidential - it's MODERN DAY PRESIDENTIAL. Make America Great Again!" Love him or hate him, controversy generates publicity, and none of what he's done on Twitter has created any tangible, real-world problems; in fact, some of his Tweets earlier this year have probably had a positive effect on the stock markets.

In other words, it's modern political humor, stemming from the fact that Trump's opponents are taking everything he says way too seriously.