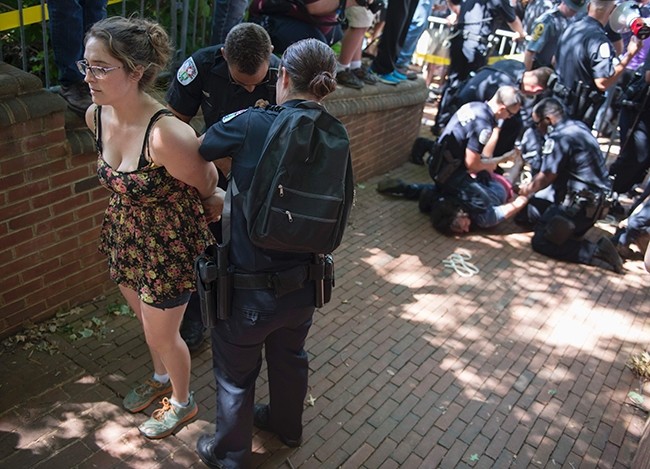 A few dozen Ku Klux Klan members and supporters shouted "white power" at a rally on Saturday in Charlottesville, Virginia where they protested against a city council decision to remove a statute honoring Confederate General Robert E. Lee.

The group was guarded by scores of police and outnumbered by hundreds of counter-protesters who waved signs denouncing racism. Anti-KKK protesters raised their voices in chants and shouts, drowning out speeches from the white supremacists, live video feeds on social media showed.

There were no initial reports of violence at the rally that lasted less than an hour. The Klan group that brandished Confederate flags and signs with anti-Semitic messages was separated from crowds by a ring of fencing and a heavy police presence.

Later police fired tear gas cannisters when some counter-protesters refused orders to disperse. Twenty-three people were arrested, but officials could not confirm their affiliations.

In February, the Charlottesville City Council voted 3-2 to remove the statue from the park once named for Lee and make plans for a new memorial to remember the southern city's enslaved population, The Daily Progress, the local newspaper reported.

At least one person who participated in the Klan rally against the statute removal could be seen with a holstered pistol.

Confederacy statues and flags have been removed from public spaces across the United States since 2015, after a white supremacist murdered nine black parishioners at a South Carolina church.

Critics of the monuments say they foster racism by celebrating leaders of the Confederacy in the pro-slavery South during the U.S. Civil War. Supporters say they represent an indelible part of U.S. history and part of regional heritage.

The bronze figures of Lee and his horse, Traveller, atop an oval-shaped granite pedestal has been in the park for nearly a century, the city of Charlottesville said.

Torch-wielding white nationalists rallied in the college town that is home to the University of Virginia's flagship campus in May to protest the move. A legal battle is going on over the statue's removal and no date has been set.