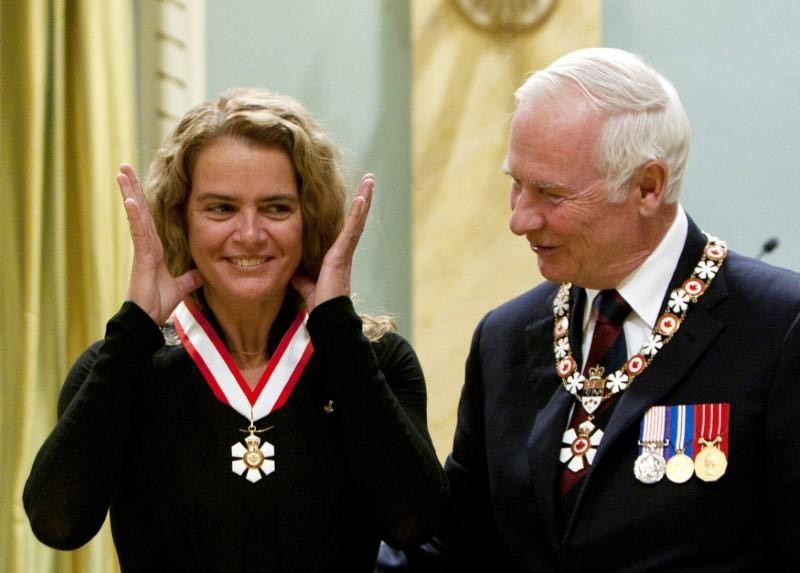 Canadian astronaut Julie Payette (L), smiles after being awarded the rank of Officer in the Order of Canada by Governor General David Johnston at Rideau Hall in Ottawa September 16, 2011. (Reuters Photo)
by Compiled from Wire Services Jul 13, 2017 12:00 am

Payette, 53, would replace outgoing Governor General David Johnston, 76, whose term is set to expire in September after nearly seven years in office.

Trudeau, who made headlines by naming a gender-balanced cabinet after his Liberals won a surprise majority government in 2015, will announce Payette's appointment on Thursday, the Globe and Mail newspaper and Canadian Broadcasting Corp reported.

The prime minister's office did not respond immediately to a request for comment.

A Montreal native, Payette participated in space missions in 1999 and 2009 and worked with both the U.S. and Russian space agencies, according to her Canadian Space Agency biography. She was the first Canadian to board the International Space Station, in 1999, and flew on space shuttles Endeavour and Discovery.

Payette logged over 611 hours in space. She also served as the Canadian Space Agency's chief astronaut between 2000 and 2007.

A computer engineer with a commercial pilot license, Payette is also an accomplished athlete, pianist, flutist and choral singer.

The lion's share of the governor general's role is ceremonial, including the swearing-in of the prime minister, chief justices and cabinet ministers and formally signing legislation into law, but the job can also entail settling constitutional questions. The governor general is also nominally Canada's commander-in-chief.