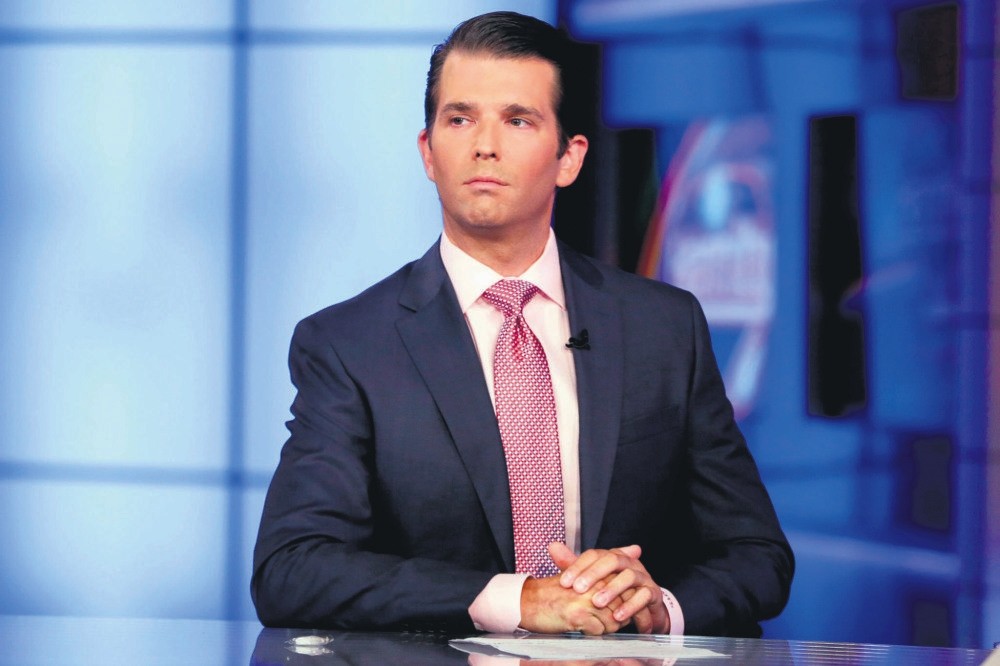 Donald Trump Jr. released a series of emails that revealed last year he eagerly agreed to meet a Russian lawyer who claimed to have damaging information about Democratic rival Hillary Clinton as part of Moscow's official support for his father.
by Angelos Berberakis Jul 13, 2017 12:00 am

The Russian collusion story has heated up once again in U.S. media after Donald Trump Jr. made public an email exchange he had with a Russian lawyer

On June 3, 2016, while the presidential race was hot and getting hotter by the day, President Donald Trump's first-born son, Donald J. Trump Jr., received an email from Rob Goldstone in which he claimed that he had access to information that could be incriminating to Hillary Clinton and thus aid his father.

Goldstone was a former British tabloid journalist and current talent manager for Azerbaijani singer Emin Agalarov who had performed at Miss Universe 2013 in Moscow and a golf championship, both related to the Trump Organization. Trump Jr. had met Goldstone at the golf championship years prior as part of his responsibilities for the company's EVP.

In the email, Goldstone says that his client's (Emin's) father, Aras Agalarov, had met with "the crown prosecutor of Russia" and in their meeting "offered to provide the Trump campaign" with information that could be damaging to the Clinton campaign.

There is no "Crown Prosecutor," a British position, in Russia, the closest to that title being the prosecutor general of the Russian Federation, namely Yuri Chaika, a close aide to President Vladimir Putin who has similar responsibilities to those of U.S. Attorney General Jeff Sessions, who was also an aide to Trump during the campaign. Chaika was also accused of corruption by Russian opposition figure Alexey Navalny in a December 2015 investigation report.

Trump Jr. expressed interest in the allegedly incriminating information against the Trump campaign's opponent, Clinton, saying: "If it's what you say I love it especially later in the summer," referring to the upcoming Republican nomination.

It would be good to note at this point that all this occurred before WikiLeaks had released the 20,000 emails between top Democratic National Committee (DNC) figureheads and before the Russian collusion and hacking stories had begun.

In a recent interview, when asked about the contents of the email, which also claimed that the Russian government was in favor of the Trump campaign due to the Clinton campaign's hostile rhetoric against the country and its president, he said that it did not seem like a red flag exactly because no one was talking about Russia. "I didn't know these guys well enough to understand that if this talent manager from Miss Universe had this kind of thing so I wanted to hear him out and play it out and see what happens […] Someone sent me an email, I can't help what someone sends me; I read it, I responded accordingly […] This is pre-Russia-mania."

On June 9, 2016, Trump Jr. met with a Russian lawyer by the name of Natalia Veselnitskaya in Trump Tower in New York to discuss this matter. Trump Jr. insists, however, that his meeting with her was completely irrelevant to anything that had been mentioned in the email exchanges.

According to Trump Jr., Veselnitskaya, who was supposed to hand him information, but did nothing of the sort, and started instead to talk about the Magnitsky Act, which had been signed by former President Barack Obama in 2012 as part of punishments against Russia for the mistreatment of a Russian prisoner, Sergei Magnitsky, in 2009.

In response to the Magnitsky Act, the State Duma passed a bill denying the adoption of Russian children into the United States and also banned some U.S. officials from Russia.

Trump Jr. says Veselnitskaya was there to talk about the adoption issue and that alone, which prompted Trump's son-in-law and advisor Jared Kushner to leave the meeting after five to 10 minutes and Paul Manafort, then chairman of the Trump campaign, to keep himself busy with his cellphone while Trump Jr. himself was "basically sitting there listening as a courtesy to my acquaintance who had set up the meeting."

"I think what happened is he sort of goosed-up, he built-up, there was some puffery to the email to get the meeting, to make it happen and in the end there was some bait and switch about what it was really supposed to be."

He did not even mention the meeting to his father because he viewed it is as "such a nothing, there was nothing to tell […] It was literally just a waste of 20 minutes."

Veselnitskaya herself said that the only question she had gotten from Trump Jr. was whether she actually had any information as had been suggested in the email regarding Clinton's dealings with Russia, to which she said she did not.

She also says she has no official ties to the Kremlin and runs a private practice.

The Trump administration insists that no information was exchanged in the meeting and there was nothing remotely illegal about two private citizens having a meeting, and had any dubious info changed hands it would have been leaked to the press over a year ago.