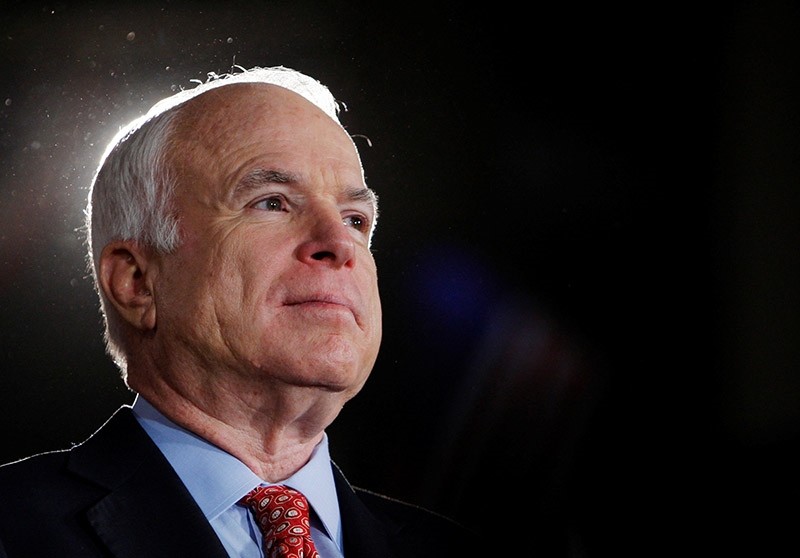 U.S. Senator John McCain, a former prisoner of war and the maverick 2008 Republican presidential nominee, has been diagnosed with brain cancer, his office announced Wednesday.

The 80-year-old lawmaker from Arizona underwent surgery to remove a blood clot from above his left eye last week and tests "revealed that a primary brain tumor known as a glioblastoma was associated with the blood clot," the Mayo Clinic, whose doctors performed the surgery in Phoenix, said in a statement released by McCain's office.

McCain was recovering from that surgery "amazingly well," his doctors said, adding that he and his family were reviewing further treatment options that could include "a combination of chemotherapy and radiation."

Glioblastoma is considered a grade IV tumor, the most malignant of gliomas. Medical experts said it can be very aggressive and spread into other parts of the brain quickly.

"It takes people's lives almost uniformly ... The tumor cells are very resistant to conventional therapy, such as radiation and chemotherapy. It's a poor prognosis," said Dr. Richard Ellenbogen, who chairs the Department of Neurological Surgery at the University of Washington.

This is not McCain's first bout with cancer. Doctors removed several malignant melanomas on McCain's skin in the 1990s and 2000s, including an invasive melanoma in 2000.

Experts had said this week that McCain's latest operation suggested the possibility of a return of cancer.

McCain's office said the senator "is in good spirits as he continues to recover at home with his family in Arizona," and that he will consult with his care team about when he might be able to return to work in Washington.

The news triggered a flood of messages of support from across the political spectrum for McCain, who chairs the Senate Armed Services Committee and is in his sixth term in the upper chamber of Congress.

"Senator John McCain has always been a fighter. Melania and I send our thoughts and prayers to Senator McCain, Cindy, and their entire family," President Donald Trump said in a statement. "Get well soon."

Trump was accused of crossing the line with his criticism of McCain shortly after the billionaire businessman announced his presidential bid in 2015, disparaging the senator as "not a war hero."

"I like people who weren't captured," Trump said, in remarks that foretold the nastiness of the 2016 race.

But Trump is well aware of the importance of McCain's vote on health care, with the latest effort to repeal and replace the Affordable Care Act hanging by a thread.

"Plus, we need his vote," Trump said Monday after wishing McCain well after his blood clot surgery.

The Arizona senator, who was first elected to Congress in 1982 and to the Senate four years later, has been one of his party's most vocal critics of Trump, particularly over his Russia policy.

Senate Majority Leader Mitch McConnell quickly issued a statement saying the entire chamber was praying for their colleague and hoped to see him back soon.

"He has never shied from a fight and I know that he will face this challenge with the same extraordinary courage that has characterized his life."

"Cancer doesn't know what it's up against. Give it hell, John," Obama said on Twitter.

McCain, a former U.S. Navy aviator, was shot down over Hanoi in 1967 as he conducted a bombing mission during the Vietnam War.

He was badly injured when he parachuted out, and was tortured during his five and a half years as a POW.

Released in 1973, McCain won a U.S. House seat in 1982 before winning election to the Senate four years later.

He emerged as a national security hawk, traveling the world on congressional missions to the Middle East, Asia and Europe where he reassured American allies and pricked its adversaries.

He also stood accused of heedlessly backing wars or military interventions, and once suggested U.S. forces should remain in Iraq for 100 years.

Early this year, the octogenarian who has advocated for more aggressive U.S. military involvement in Syria made a secret trip to the war-ravaged nation to meet with U.S. forces and discuss the campaign against Daesh terrorist group.

Despite his hawkish positions, McCain has served the peacemaker role, too.

His scars from the Vietnam torture are visible, and yet he is the lawmaker who perhaps more than any other has guided the rapprochement between Washington and its former foe in Asia.