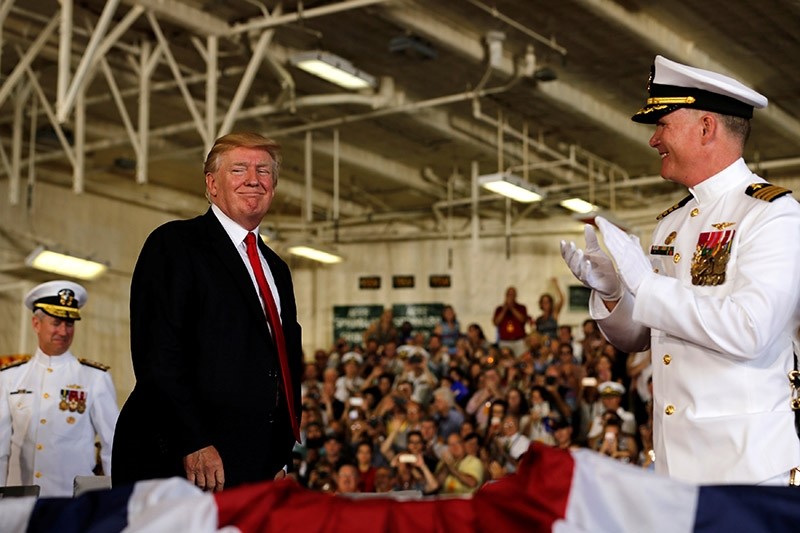 The United States on Saturday commissioned a new aircraft carrier that President Donald Trump called "a 100,000-ton message to the world."

In a stirring ceremony full of military tradition and pomp, Trump said the USS Gerald R. Ford - named after the U.S. president from 1974-77 - will become a valued asset in the U.S. fleet.

Trump told the sailors that they were about to embark on a "truly great adventure" on the ship.

"To every patriot who will serve on this ship, I say this: Keep the watch, protect her and defend her," he said. "Godspeed and good luck."

Trump arrived aboard the carrier's steamy flight deck by the Marine One presidential helicopter and was greeted by Defense Secretary Jim Mattis and other officials.

Trump, who visited the carrier in March to promote his plans for a military buildup, told Time magazine this year that the Navy should revert to using steam catapults to launch fighter jets because some of the state-of-the-art systems and technology aboard the USS Ford "costs hundreds of millions of dollars more money and it's no good."

Construction on the USS Ford started in 2009 and was to be completed by September 2015 at a cost of $10.5 billion. The Navy has attributed the delays and budget overruns to the ship's state-of-the-art systems and technology, including electromagnetic launch systems for jets and drones that will replace steam catapults.

The warship also has a smaller island that sits farther back on the ship to make it easier and quicker to refuel, re-arm and relaunch planes, and a nuclear power plant designed to allow cruising speeds of more than 30 knots and operation for 20 years without refueling.

The vessel completed sea trials in April but still will go through a battery of tests and workups at sea before becoming operational and ready for deployment, work that is expected to cost nearly $780 million and take more than four years to complete, congressional auditors said in a report this month.

The USS Ford is named after the country's 38th president, who rose to the rank of lieutenant commander in the Navy during World War II. After military service, Ford was elected to the House of Representatives, serving Michigan until he was tapped by President Richard M. Nixon to become vice president.

Ford became president after Nixon resigned during the Watergate scandal.

Docked at Naval Station Norfolk, the USS Ford eventually will house about 2,600 sailors, 600 fewer than the previous generation of aircraft carriers. The Navy says that will save more than $4 billion over the ship's 50-year lifespan.

The air wing to support the Ford could add more personnel to the ship, which is designed to house more than 4,600 crew members.