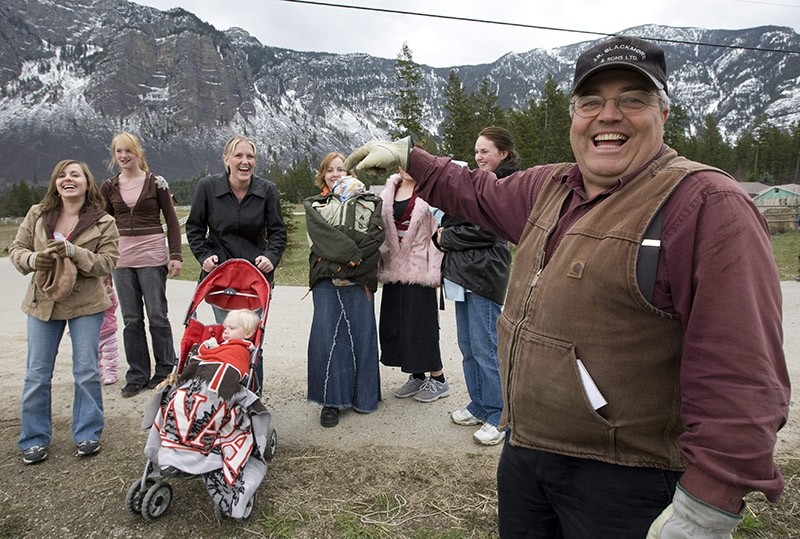 In this April 21, 2008, file photo, Winston Blackmore, the religious leader of the polygamous community of Bountiful located near Creston, British Columbia, Canada, shares a laugh with 6 of his daughters and some of his grandchildren (AP Photo)
by Compiled from Wire Services Jul 25, 2017 12:00 am
Two former leaders of an isolated polygamous community in Canada were convicted Monday of practicing polygamy after a decades-long legal fight, setting up another potential court battle over the constitutionality of Canada's polygamy laws.

Winston Blackmore and James Oler were found guilty by British Columbia Supreme Court Justice Sheri Ann Donegan who said the evidence was clear that Blackmore was married to 25 women at the same time and that Oler was married to five women in the tiny community of Bountiful.

Blackmore never denied having the wives as part of his religious beliefs that call for "celestial" marriages. His lawyer Blair Suffredine has already said Blackmore would challenge the constitutionality of Canada's polygamy laws if his client was found guilty.

Under Canadian law, the maximum penalty they will each face is five year in prison. The two will be sentenced at future hearings.

Blackmore and Oler are members of the Fundamentalist Church of Jesus Christ of Latter-Day Saints, a breakaway Mormon sect that believes in plural marriage. The group's main base is in a small community on the Utah-Arizona border in the United States.

Oler was chosen to lead the Canadian community just north of the U.S. state of Idaho following Blackmore's excommunication from the sect in 2002 by Warren Jeffs, considered the prophet and leader of the group.

Authorities have said Jeffs still leads the sect from a Texas prison, where he is serving a life sentence for sexually assaulting underage girls he considered brides.

The mainstream Mormon church renounced polygamy in the late 19th century and disputes any connection to the fundamentalist group's form of Mormonism.

At the 12-day trial earlier this year, witnesses included mainstream Mormon experts, law enforcement officials who worked on the investigation and Jane Blackmore, a former wife of Winston Blackmore who left the Canadian community in 2003.

"She was a careful witness," Donegan said. "There was nothing contrived or rehearsed in her answers. She was impartial."

Much of the evidence in the trial came from marriage and personal records seized by law enforcement at a church compound in Texas in 2008. Donegan disagreed with assertions by Blackmore and his lawyer that the records should be given little or no weight, saying she found them reliable.

Donegan said Winston Blackmore's adherence to the practices and beliefs of the religious group were never in dispute, nothing that he did not deny his marriages to police in 2009. Blackmore even made two corrections to a detailed list of his alleged wives, she said.

"He spoke openly about his practice of polygamy," Donegan said. "Mr. Blackmore confirmed that all of his marriages were celestial marriages in accordance with FLDS rules and practices."

The investigation and attempted prosecution of Blackmore and Oler dragged on for years due to uncertainty about Canada's polygamy laws.

After a constitutional reference question was sent to the British Columbia Supreme Court, the court ruled in 2011 that laws banning polygamy were valid and did not violate religious freedoms guaranteed in the Charter of Rights and Freedoms.