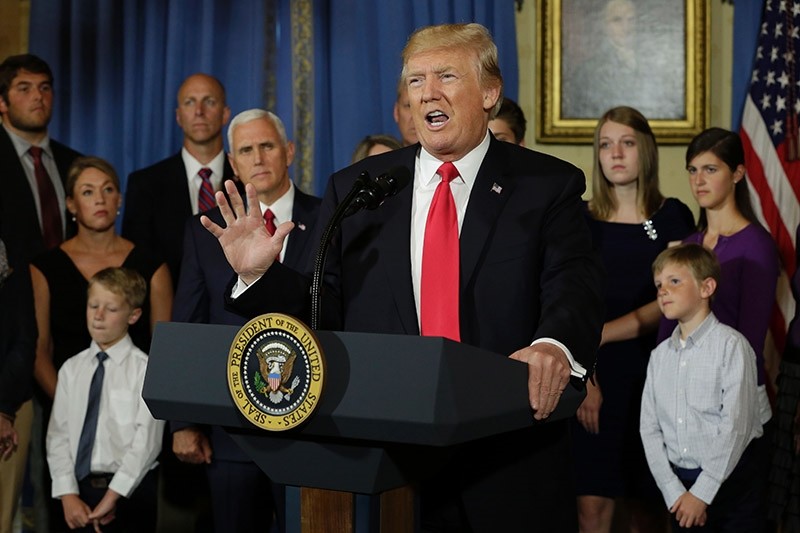 U.S. President Donald Trump delivers s statement on healthcare in front of alleged ,victims of Obamacare, at the White House in Washington on July 24, 2017. (AFP Photo)
by Compiled from Wire Services Jul 25, 2017 12:00 am

The U.S. House of Representatives is expected to vote overwhelmingly on Tuesday for a bill that would slap new sanctions on Russia, Iran and North Korea, potentially complicating President Donald Trump's hopes of pursuing improved relations with Moscow.

The bipartisan measure aims to punish Russia for its 2014 annexation of Crimea from Ukraine and for alleged interference in the 2016 U.S. presidential election. The measure's fate in the Senate is uncertain after a key senator said the deal announced over the weekend may not be final.

"We're about there, there's still some procedural issues we're discussing but, you know, I think it worked out very, very well, we still got a couple of things to talk about on North Korea," Corker said.

If the Republican-led Senate passes the measure, Trump will need to decide whether to sign the bill or veto it. Rejecting it would carry a risk that his veto could be overridden by lawmakers if they can muster enough support.

The Trump administration has objected to a provision in the sanctions bill that the president obtain congressional approval before easing any sanctions on Moscow.

"He's going to study that legislation and see what the final product looks like," White House spokeswoman Sarah Sanders told reporters on Monday when asked whether Trump would support it.

Trump's relationship with Russia has been a focus of the first six months of his presidency as investigations continue into whether his associates colluded with Russian hackers to influence the election on his behalf.

Russia denies interfering in the U.S. election and Trump denies his campaign colluded with Moscow.

As the Republican-controlled House takes up the sanctions bill, Trump's son-in-law, Jared Kushner, will visit Capitol Hill for a second straight day to be interviewed about his contacts with Russian officials during the 2016 campaign and the presidential transition.

An earlier version of the bill, including sanctions on Russia and Iran, passed the Senate 98-2 on June 15. A North Korea sanctions bill passed the House by 419-1 in May and House lawmakers were becoming increasingly impatient with the Senate's failure to take up that legislation.

House members saw the Iran and Russia sanctions bill as a chance finally to get the North Korea measure through the Senate.

The Kremlin on Monday warned that fresh sanctions on Russia would hit the interests of both sides.

"We consider such a continuation of the rhetoric of sanctions counter-productive and harmful to the interests of both countries," Kremlin spokesman Dmitry Peskov said.

From Paris to Berlin the sanctions bill was seen as Washington's unilateral action that disrupts a carefully crafted order.

To date, sanctions against Russia have been coordinated on both sides of the Atlantic, so the Western bloc appeared united.

"For us, G7 unity regarding sanctions is of key importance as it is the respect of implementation of Minsk agreement," European Commission spokesperson Margaritis Schinas said.

Commission President Jean-Claude Juncker has signalled that the European Union would be prepared to respond.

Several European nations including Germany are livid because the new law would allow the punishment of companies engaged with pipelines from Russia, for example by limiting their access to US banks.

The provision could theoretically pave the way for sanctions against the European partners in Nord Stream 2, a project to build a pipeline carrying Russian gas across the Baltic which could boost supplies to Germany from 2019.

Such partners include France's Engie, Germany's Uniper and Wintershall, Austrian firm OMV and the Anglo-Dutch Shell.

To date, Washington and Brussels had agreed that sanctions would not affect Europe's gas supply.

In an apparent concession, the House slightly modified a provision so that the bill only targets pipelines originating in Russia, sparing those which merely pass through Russia, such as the Caspian pipeline which carries oil from Kazakhstan to Europe.