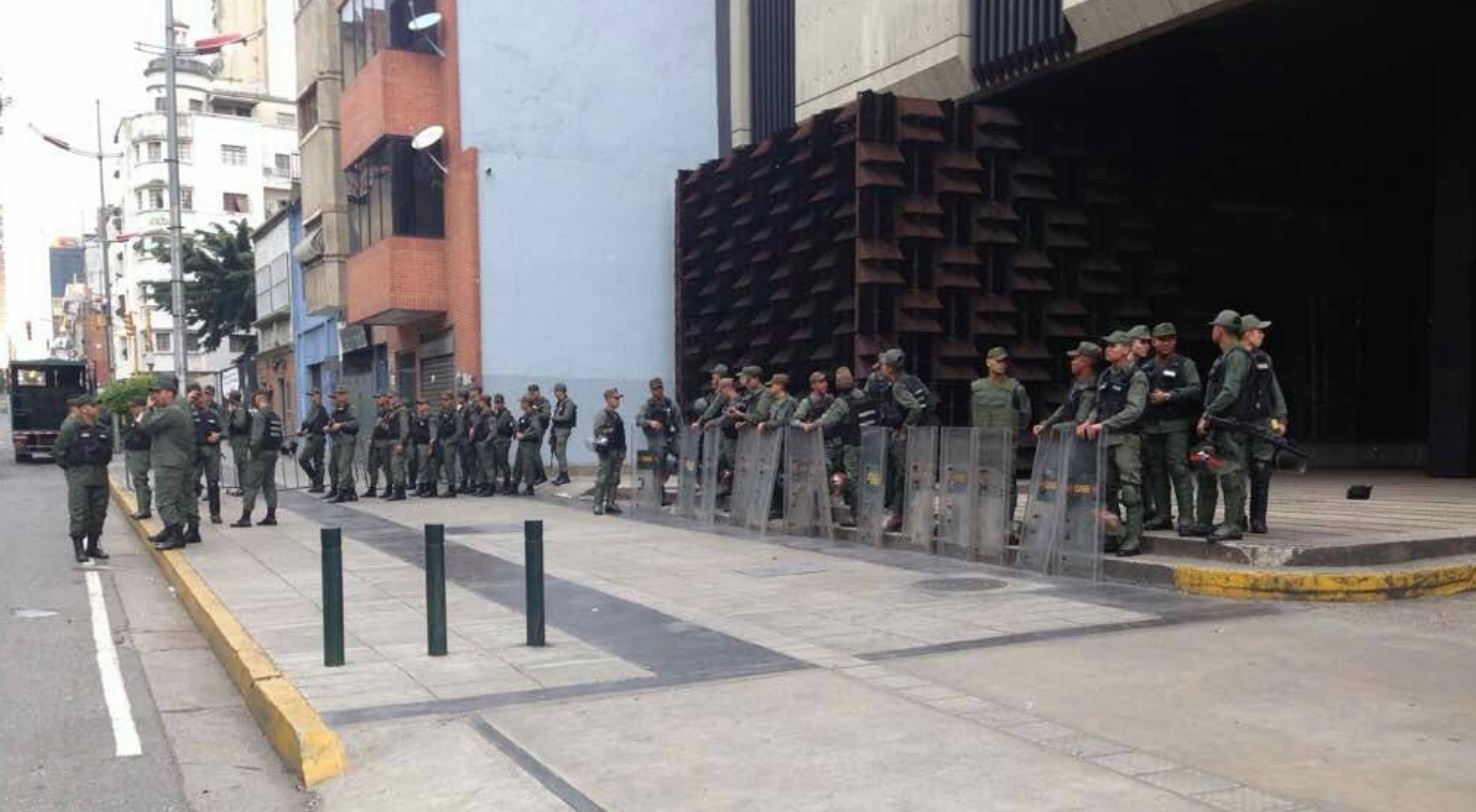 Security forces surrounded the entrance to Venezuela's chief prosecutor's office Saturday ahead of a session of the newly installed constitutional assembly that is expected to debate removing the onetime loyalist turned arch government critic.

Luisa Ortega denounced what she called a military "siege" on Twitter, publishing photos apparently taken from security cameras showing some 30 national guardsmen in riot gear standing outside her headquarters in Caracas. Access to the downtown block where the building is located was completely restricted amid a heavy troop deployment.

The move comes as members of the all-powerful constitutional assembly pledged to move quickly against President Nicolas Maduro's opponents beginning as early as Saturday, when the body meets for just the second time.

"Don't think we're going to wait weeks, months or years," former Foreign Minister Delcy Rodriguez said on Friday after she was voted unanimously by all 545 delegates to lead the assembly. "Tomorrow we start to act. The violent fascists, those who wage economic war on the people, those who wage psychological war, justice is coming for you."

The constitutional assembly was seated despite strong criticism from the United States, other countries and the Venezuelan opposition, which fear the assembly will be a tool for imposing dictatorship. Supporters say it will pacify a country rocked by violent protests.

Its installation is virtually certain to intensify a political crisis that has brought four months of protests in which at least 120 people have died and hundreds more have been jailed.

Maduro vows the assembly will strip opposition lawmakers of their constitutional immunity from prosecution, while members of congress say they will only be removed by force.

But the opposition is struggling to regain its footing in the face of the government's strong-arm tactics and the re-emergence of old, internal divisions. Several opposition activists have been jailed in recent days, others are rumored to be seeking exile and one leader has broken ranks from the opposition alliance to say his party will field candidates in regional elections despite widespread mistrust of Venezuela's electoral system.

In a sign of its apparent demoralized state, only a few hundred demonstrators showed up for a Friday protest against the constitutional assembly, one of the smallest turnouts in months.

"This is what the constitutional assembly will bring: more repression," opposition lawmaker Miguel Pizarro said.

However, Maduro accuses his opponents of using violence and argues that the constitutional assembly is the best way to restore peace. On Friday he heralded security forces who have been on the front lines of daily street battles, claiming that 580 of them had suffered serious injuries from attacks by "terrorist" protesters.

"I feel deeply the wounds of each one of you," Maduro said addressing a small group of injured national guardsmen. "With your bodies as your shield, you have defended the right to peace."

An increasing number of foreign governments have sided with the opposition, refusing to recognize the constitutional assembly and further isolating Maduro's government.

On Friday the Vatican urged Maduro to suspend the new body, expressing "deep worry for the radicalization and worsening" of the turmoil in Venezuela. President Donald Trump and his French counterpart, Emmanuel Macron, agreed that Maduro must restore the rights of the Venezuelan people in a phone call, according to a readout of the conversation by the White House.

Foreign ministers from several South American nations said they will gather Saturday in Brazil for an emergency meeting to decide whether to expel Venezuela from the Mercosur trade bloc for violating its democratic norms. Venezuela was suspended from the group in December.

The opposition boycotted the July 30 election for the constitutional assembly, saying the rules were rigged to further entrench Maduro's "dictatorship."

The results have come under mounting scrutiny after the international company that provided the electronic voting machines said that "without any doubt" the official turnout had been tampered with — a charge dismissed by Maduro and the National Electoral Council.

The constitutional assembly is made up of delegates from an array of pro-government sectors such as trade unionists, students and even representatives of Venezuelans with physical disabilities. But the agenda is expected to be set by bigger-name loyalists, including Maduro's wife, son and several Cabinet ministers who resigned to join the body.

It will have sweeping powers to upend institutions and in theory could even remove Maduro. One of its first tasks could be the closure of the opposition-controlled congress and the removal of Ortega Diaz, a longtime supporter of the late President Hugo Chavez who recently broke with his successor.

Ortega Diaz filed a complaint Thursday seeking a court order to block installation of the new assembly. The request, filed to a lower court in an apparent attempt to circumvent the government-stacked Supreme Court, was dismissed Friday on procedural grounds.

She also ordered prosecutors to investigate the allegations of election tampering. Smartmatic CEO Antonio Mugica said Wednesday in London that results recorded by his company's systems and those reported by the National Electoral Council show the official turnout count of 8 million was off by at least 1 million. An independent poll suggested that fewer than 4 million people voted.