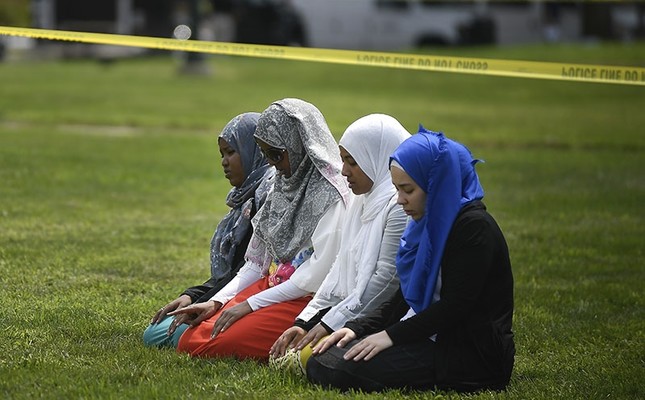 On Aug. 5, the Dar Al-Farooq Islamic Center, a small mosque in Bloomington, Minnesota, was targeted with an "improvised explosive device" at around 5 a.m., at a time when the congregation was inside getting ready for their morning prayer. Fortunately, no one was injured during the attack, which caused material damage to the property and was termed as a "terrible, dastardly, cowardly, terrible" crime by Minnesota Governor Mark Dayton. "The destruction done to this sacred site is just unthinkable, unforgivable," Dayton was quoted as saying by The Star Tribune during his press conference on the same day.

The latest incident was a new dark stain in the U.S. record of anti-Muslim tendencies, which have significantly increased in the past couple of years. According to experts, in addition to other factors, the election of Donald Trump as president and his discriminative political rhetoric, as well as the media bias against Muslims and Islam has been a contributing factor to the recent escalation violence against Muslims in the United States.

Although racial discrimination is not a hidden story in American history and politics, and continues to haunt the daily lives of many in the U.S., a new alarming trend, particularly against Muslims and or those with perceived Muslim backgrounds, has been observed.

Documenting the anti-Muslim hate crimes in the U.S., a recent report published by the Council on American-Islamic Relations (CAIR) suggests that "the number of hate crimes in the first half of 2017 spiked 91 percent compared to the same period in 2016," which was the worst year since 2013, the year CAIR began to document incidents in a new system.

According to the report, "the number of bias incidents in 2017 also increased by 24 percent compared to the first half of 2016."

"The most prevalent trigger of anti-Muslim bias incidents in 2017 remains the victim's ethnicity or national origin, accounting for 32 percent of the total. Twenty percent of incidents occurred because of an individual being perceived as Muslim. A Muslim woman's headscarf was a trigger in 15 percent of incidents," the report also indicates.

Todd Green, an associate professor of religion at Luther College, who writes and speaks on topics pertaining to Islamophobia in Europe and the United States, and is a former advisor at the U.S. State Department, says the recent attacks should be a "wake-up call for the U.S. and its leaders."

"The use of an explosive device clearly indicates the intent to harm or kill," Professor Green told Daily Sabah. He added that the rising violence and attacks against Muslims is a result of the "Trump effect."

"There's no doubt in my mind that this is the 'Trump effect.' True, the overt anti-Islamic rhetoric [used by Trump] has decreased, but we must take seriously the long-term effects of the rhetoric from his presidential campaign. Trump flirted with a registration system and ID cards for Muslims. At one point, he stated flatly that 'Islam hates us.' Most significantly, he called for 'a total and complete shutdown of Muslims entering the country.' Trump repeatedly signaled to his supporters and the nation at large that Muslims were not one of us, that they posed a significant security threat to the U.S."

According to another CAIR report, titled "Civil Rights Report 2017: The Empowerment of Hate," between 2014 and 2016 there was a nearly 600 percent increase in hate crimes targeting Muslims.

Green also highlights that, President Trump, known for being very active on social media, has refrained from tweeting on acts against Muslims, while he is very quick to show his stance when the victims are non-Muslims.

"It's been over three days since the attack on the Dar Al-Farooq Mosque, and Trump has not uttered one word in response to the bombing. He's made no tweets condemning the attack and no official statements expressing solidarity with Muslims in Bloomington, MN. This is a pattern," Green said. "His silence sends a clear signal that Muslim lives do not really matter, that Muslims are not worth his time and effort."

Craig Considine, a sociology professor at Rice University and an author, told Daily Sabah that the rise in anti-Muslim tendencies are "inextricably linked to the rise of Trumpism [white Christian nationalism]. Arsonists who attack mosques feel emboldened by a president who they perceive to be anti-Muslim himself."

Another triggering dimension of anti-Islamic tendencies is the media's portrayal of Muslims as well as the bias against Muslims in covering attacks against them, the experts also say.

"The word terrorism itself is hardly ever used when Muslims are the victims, only when they are the perpetrators," Professor Considine says.

Todd Green claims that the word terrorism is now a "racialized" term and "It's applied almost exclusively to Muslims or people with a Muslim background."

"Media outlets are hesitant to apply the word when Muslims are the target of attacks or when perpetrators are clearly not Muslim," Green says, adding that the media also describes some attacks as terrorism and others as not "based primarily on whether or not the perpetrator is a Muslim."

According to a report released in 2016 by a Toronto-based consulting firm, the western mainstream media portrays a negative and biased perception of Islam and Muslims in their headlines. The report, titled "Are Muslims Collectively Responsible? A Sentiment Analysis of the New York Times," has used The New York Times as a case study, making comparisons between the usage of the words Islam/Muslims and other words, such as alcohol, cancer, Yankees, Christianity, and Republican.

The report was prepared by using data from The New York Times from 1990 to 2014. It compared the headlines to "Identify the specific terms associated with Islam and Muslim, while simultaneously categorizing them as positive, negative or neutral." The report was prepared by making a comparative analysis with other key words, including Alcohol, Christianity, Cancer, Democrat, Republican and the New York Yankees.

'Americans do not know Muslims'

In addition to political rhetoric against Muslims by Trump-like politicians and the media's biased coverage, Professor Considine argues that among the foundational reasons behind the escalation in anti-Muslim sentiment is that there is a lack of interaction with Muslims on a regular basis among non-Muslim Americans and the "lack of exposure to Muslims themselves is an obvious contributor to the increase in anti-Muslim sentiments." He also added that the "ignorance of Islam and American Muslims contributes to increasing Islamophobia."

Professor Green, on the other hand, claims that Muslims are the new scapegoats, utilized by anti-Islamic proposals seeking far-right votes.

"In the post 9/11 West, election cycles always lead to spikes in anti-Muslim prejudice and hatred as opportunistic politicians try to galvanize the electorate by proposing policies that target Muslim minority communities," Green said.

"The political motive for generating anti-Muslim hostility cannot be underestimated. It's been quite effective, as we've seen with Trump's victory and the increasing influence of the far-right in Europe."

Both Professor Green and Professor Considine share that interaction between communities based on understanding and education about each other will contribute to tackling Islamophobia, and ultimately benefit civil society in the U.S. and the West in general.

In addition, Green highlighted that "The best way to tackle Islamophobia is to speak out against it. Unfortunately, too many politicians are either silent in the face of Islamophobia or muted in their responses to overt anti-Muslim sentiment or discrimination. If news had broken last week of an explosive device that detonated in a white Christian church, Trump and politicians on both sides of the aisle would have bent over backwards to condemn the attack."

Share on Facebook Share on Twitter
Previous in Americas The White House has made no official statement condemning the bombing... Next in Americas FBI agents have searched one of the homes of President Donald Trump's...
DAILY SABAH RECOMMENDS