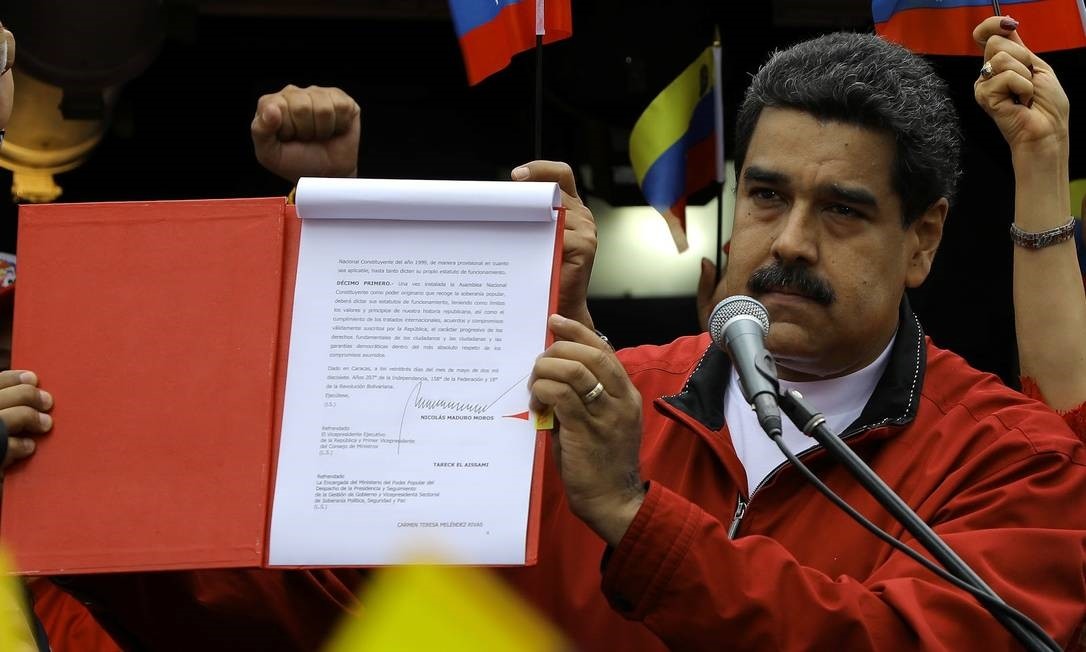 Thousands of candidates have applied for seats in the National Constitutional Assembly, forcing offices to remain open an additional 24 hours. (REUTERS Photo)
by Compiled from Wire Services Aug 09, 2017 12:00 am

Venezuela's new constitutional assembly has passed a decree declaring itself superior to all other branches of government.

The order passed Tuesday bars the opposition-controlled National Assembly and other agencies from taking any action that would interfere with the laws passed by the pro-government super-body.

Embattled President Nicolas Maduro convoked the constitutional assembly in what he says is an attempt to resolve the nation's political standoff but opposition leaders contend it is a power grab.

Opposition leaders and a growing list of foreign government have refused to recognize the new assembly.

Stalin Gonzalez, leader of the opposition coalition that has held a majority since 2015 in the unicameral National Assembly, said that soldiers refused to let him in the building when he arrived for work on Tuesday.

"This government is forcing its way into chambers that it can't win through legitimate means," Gonzalez said.

He accused the executive branch of an illegal "seizure" of the National Assembly, which he said would not recognize the legitimacy of decisions by the new body.

The legislature last met on Monday, when they were still sharing the building with 545 members of the constitutional assembly, who were elected in a discredited July 30 vote.

The vote was decreed by the socialist Maduro, without a referendum as required by the 1999 constitution, and boycotted by the opposition. The delegates elected were overwhelmingly pro-Maduro, including his wife and son.

The company that supplies Venezuela's electronic election system said last week that the results were manipulated to inflate voter turnout in the vote.

Freddy Guevara, vice president of the legislature, said Venezuela was on the precipice of a "hard dictatorship."

The opposition accuses Maduro of seeking to cripple the legislative and judicial branches and centralize all power to the presidency.

The constitutional assembly convened Friday in the building, even as the regular legislature continued meeting in the Salon Eliptico.

"We will defend the mandate that the people gave us with their votes," Millan vowed.

More than 120 people have died since April in anti-Maduro protests, including at least 10 in election-related violence on January 30.

The constitutional assembly has considered forming a "truth commission" to investigate deaths during protests, and Rodriguez said that "the right-wingers" would be held to account.

A United Nations humans rights team said Tuesday it had found regular and organized use of force against people protesting Maduro's rule, amid a collapse of the rule of law.

The team, which conducted remote interviews with victims and witnesses, found evidence of aggressive house raids, torture and mistreatment of prisoners, the UN said.

"Since the wave of demonstrations began in April, there has been a clear pattern of excessive force used against protesters," UN High Commissioner for Human Rights Zeid Ra'ad Al Hussein said. "The responsibility for the human rights violations we are recording lies at the highest levels of government."

Ramon Muchacho, mayor of Chacao district of Caracas, was sentenced Tuesday to 15 months in prison and barred from exercising his elected office by the Supreme Court. He was accused of failing to act against street blockades and other anti-Maduro demonstrations in his well-heeled district, which is an opposition stronghold.

"They are condemning us because we're fighting for a change in Venezuela," Muchacho said.

On Sunday, an attack on a coastal military base left two people dead in Valencia, 170 kilometers west of the capital Caracas.

The government called it a putsch attempt, which Maduro blamed on terrorists and mercenaries. Seven participants from "ultra-right" groups were arrested with other suspects now fugitives, he said.

Despite having the world's largest oil reserves, Venezuela is suffering rampant inflation and chronic shortages of food, medicine and other basic goods in an economic crisis worsened by the 2014 collapse of global oil prices.

Tens of thousands of Venezuelans have fled in the last several months into neighburing Colombia and Brazil to escape deprivation and turmoil.