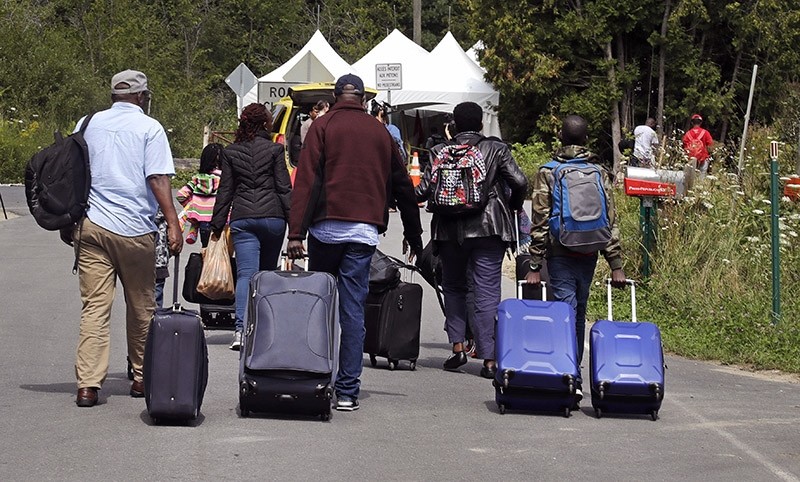 A family from Haiti approach a tent in Saint-Bernard-de-Lacolle, Quebec, stationed by Royal Canadian Mounted Police, as they haul their luggage down Roxham Road in Champlain, N.Y., Monday, Aug. 7, 2017 (AP Photo)
by Aug 10, 2017 12:00 am

Faced with a growing influx of asylum seekers from the United States, Ottawa dispatched about 100 Canadian soldiers Wednesday to build a temporary camp near the Canada-US border in Quebec.

The camp, not far from the border processing center in Saint-Bernard-de-Lacolle, about 60 kilometers south of Montreal, will be able to house about 500 people.

The temporary facility is being built in anticipation of a large influx of asylum seekers from the U.S., said Stephane Malepart, a spokesperson for the Canada Border Services Agency (CBSA).

The announcement comes as federal, provincial and municipal authorities struggle to handle a surge in people crossing from New York state to Quebec at unofficial crossings to take advantage of a legal loophole that allows them to claim asylum in Canada.

Canada's Third Safe Country agreement with the U.S. means that most asylum seekers who attempt to cross at legal border crossings are turned away because the U.S. is considered a safe country.

But the government of Canadian Prime Minister Justin Trudeau claims that, under the 1951 U.N. Refugee Convention, it is compelled to hear asylum claims made by people who cross the border illegally, through unofficial crossings, and make their refugee claims inland.

The immigration crackdown by U.S. President Donald Trump's administration has led thousands of asylum seekers to cross the border through unofficial crossings, such as Roxham Road, near the official border post at St-Bernard-de-Lacolle.

Canadian immigration officials said the number of asylum seekers crossing illegally near the Saint-Bernard-de-Lacolle has quadrupled in the past two weeks, from about 50 a day to 200 a day.

From Jan. 1 to June 30, the Royal Canadian Mounted Police - the federal agency responsible for border security between legal crossings - has intercepted 4,345 asylum seekers, according to statistics provided by the federal government.

Municipal authorities in Montreal had to create a temporary shelter at the city's Olympic Stadium last week to accommodate hundreds of asylum seekers.

On Wednesday, provincial authorities announced that they plan to turn the city's shuttered Royal Victoria Hospital into a shelter that will house about 320 people.

Many of the asylum seekers appear to be Haitians who have been living in the U.S. for years and now face deportation, after Trump's administration decided in May to extend by only six months the temporary protected status granted after Haiti's deadly earthquake in 2010.

Such Haitian asylum seekers also face an uncertain future in Canada, however, because Ottawa's own program granting temporary refuge after the earthquake has already ended, after being extended twice by the Trudeau government.

To qualify for political asylum in Canada, refugee claimants must prove they are "not able to return because of a well-founded fear of persecution" or that they face "risk to their life, or risk of cruel and unusual treatment or punishment," according to Immigration and Citizenship Canada.