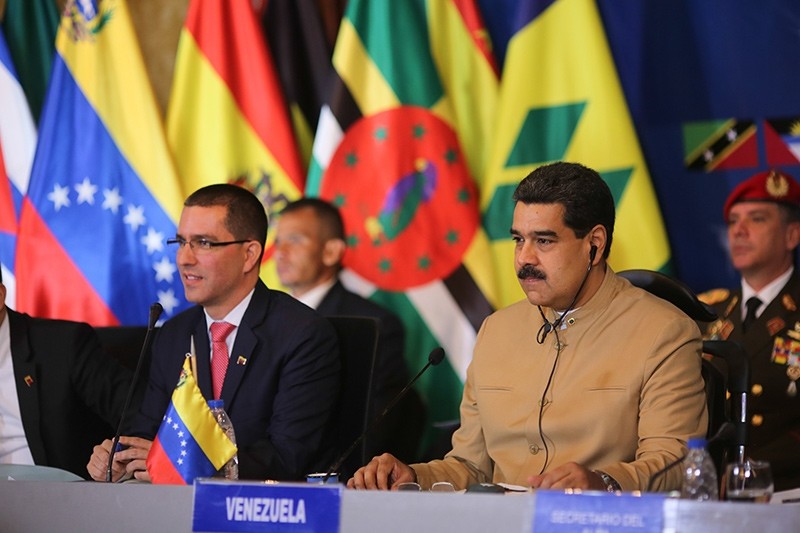 Venezuelan President Nicolas Maduro (R), next to Venezuelan Foreign Minister Jorge Arreaza (L), taking part in a session of foreign ministers of the intergovernmental organization Bolivarian Alliance for the Peoples of Our America (EPA Photo)
by Associated Press
Aug 11, 2017 12:00 am

Venezuelan leader Nicolas Maduro said he wants a meeting with President Donald Trump, the same man he ridicules as a crass imperial magnate, as the U.S. weighs slapping crippling economic sanctions on his socialist administration.

In a lengthy address Thursday to members of a new, all-powerful constitutional assembly, Maduro instructed Venezuela's foreign minister to approach the United States about arranging a telephone conversation or meeting with Trump at next month's United Nations General Assembly.

"Mr. Donald Trump, here is my hand," the socialist president said, adding that he wants as strong a relationship with the U.S. as he has with Russia.

The remarks came a day after the Trump administration slapped sanctions on eight close allies, accusing them of violating human rights and democratic norms, and debated whether to pile on with additional economic sanctions to further isolate the government.

On Thursday, Trump said he discussed Venezuela along with North Korea and Afghanistan in a security briefing with top national security aides and Vice President Mike Pence, who travels to neighboring Colombia on Sunday in a trip where discussions on how to pressure Maduro is expected to feature prominently.

"We had some very good meetings, some very good ideas, very good thoughts, and a lot of decisions were made," Trump said following the briefing, without providing any details.

Maduro's apparent olive branch was undermined in the same speech by his own angry rant against Trump, who he accused of backing a failed attack on a military base a week ago.

The Trump administration in turn has called Maduro a "dictator" and issued sanctions against him and more than two dozen other former and current officials.

Even as the U.S. for now holds back applying economic sanctions, the Maduro government is finding itself increasingly isolated from financial markets.

On Thursday, Credit Suisse bank said it banned trading in Venezuelan bonds over what it said were "recent development and the political climate" in the country, according to an internal memo. Any future transactions involving Venezuelan officials or assets will have to go through additional screening, according to the memo whose authenticity was confirmed by the bank.

Venezuela is in the midst of a severe economic downturn caused by low oil prices and government policies that have scared away private investment. The country's bonds are one of the few ways the current government is able to raise money to support its collapsing economy.

But as the country's political crisis has worsened, the bonds issued by the government as well as the state-owned oil company PDVSA have become a point of contention and concern for investors who increasingly worry they are supporting an oppressive regime as well as a country that is a great risk of defaulting on its debts. Goldman Sachs came under political pressure earlier this year for buying a reported $2.8 billion in Venezuelan bonds on the open market at a significant discount.