Tensions high in US ahead of far right, white supremacist rally in Virginia 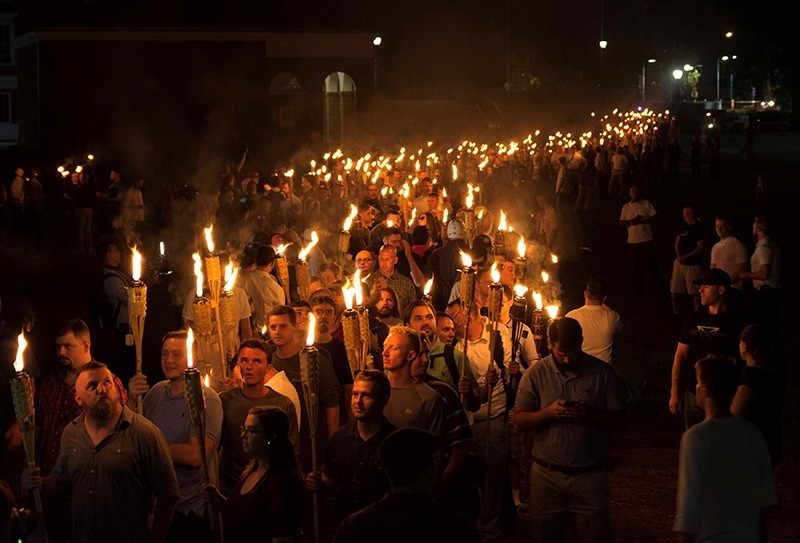 White nationalists carry torches on the grounds of the University of Virginia, on the eve of a planned Unite The Right rally in Charlottesville, Virginia, U.S. Aug. 11, 2017. (Reuters Photo)
by Aug 12, 2017 12:00 am

As the planned weekend rally of far right and white supremacist groups in the university town of Charlottesville nears, Virginia's governor on Friday urged people to stay away from the rally, which is also expected to attract a sizeable number of counter demonstrators.

The National Guard has been put on alert because of the risk of violence during Saturday's "Unite the Right" rally.

"I want to urge my fellow Virginians who may consider joining either in support or opposition to the planned rally to make alternative plans," Governor Terry McAuliffe said in a statement.

Thousands of white nationalists, including supporters of the Ku Klux Klan white supremacist group, and anti-fascist activists are expected to turn out in Charlottesville, a sleepy town planning to remove a statue of General Robert E. Lee, who led Confederate forces in the U.S. Civil War.

"The Charlottesville event could be a potentially historic showcase of hate, bringing together more extremists in one place than we have seen in at least a decade," said Oren Segal, director of the Center on Extremism at the Anti-Defamation League, a group that monitors and combats anti-Semitism.

McAuliffe, a Democrat, said many of the people at the rally will "express viewpoints many people, including me, find abhorrent. As long as that expression is peaceful, that is their right."

He said he had given security forces instructions to act quickly and decisively if violence breaks out.

Units of the Virginia National Guard will be placed on stand-by, he added.

On July 8 a few dozen Ku Klux Klan marchers gathered in Charlottesville to protest plans to remove the statue of Lee. Though they were outnumbered by hundreds of jeering counter-protestors, images of the extreme right marchers -- some donning the traditional white hood of the notorious white power group -- spread worldwide.

This time the extreme right hopes to have a stronger showing thanks to the presence of various leaders of the "alt-right" movement that has been emboldened by Donald Trump's ascent to the White House.

Dubbed the "Unite the Right Rally," the gathering could mark one of the most significant demonstrations of its kind in decades, according to the Southern Poverty Law Center, which monitors extremist groups.

But far-right demonstrators might have trouble finding somewhere to sleep: the apartment rental platform AirBnB has canceled a number of accounts linked to extreme-right views, in keeping with its non-discrimination policy.

Jason Kessler, who organized the rally, said on Twitter that the company's move amounted to an attack on "free speech and civil rights.