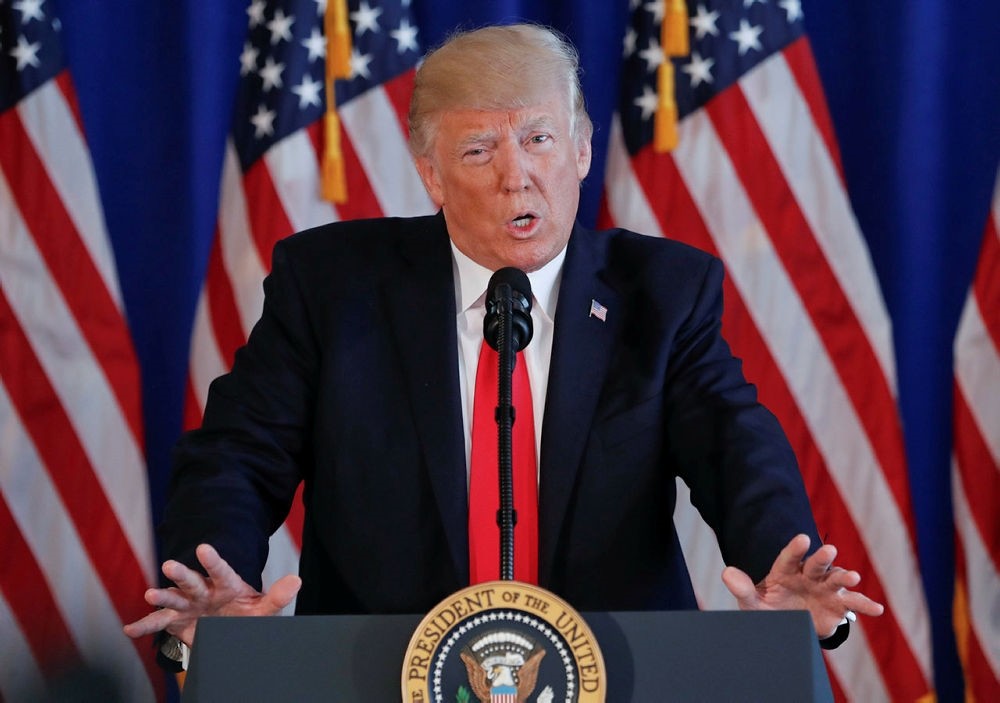 President Donald Trump on Saturday blamed "many sides" for the violent clashes between protesters and white supremacists in Virginia and contended that the "hatred and bigotry" broadcast across the country had taken root long before his political ascendancy.

That was not how the Charlottesville mayor assessed the chaos that led the governor to declare a state of emergency, contending that Trump's campaign fed the flames of prejudice.

Trump, on a working vacation at his New Jersey golf club, had intended to speak briefly at a ceremony marking the signing of bipartisan legislation to aid veterans, but he quickly found that those plans were overtaken by the escalating violence in the Virginia college town. One person died and at least 26 others were sent to the hospital after a car plowed into a group of peaceful anti-racist counterprotesters amid days of race-fueled marches and violent clashes.

Speaking slowly from a podium set up in the golf clubhouse, Trump said that he had just spoken to Gov. Terry McAuliffe, D-Va. "We agreed that the hate and the division must stop, and must stop right now. We have to come together as Americans with love for our nation and ... true affection for each other," he said.

The president said that "what is vital now is a swift restoration of law and order and the protection of innocent lives."

After completing his statement and the bill signing, Trump then walked out of the room. He ignored reporters' shouted questions, including whether he wanted the support of white nationals who have said they backed him or if the car crash in Virginia were deemed intentional, would it be declared to be terrorism.

The previous two days, Trump took more than 50 questions from a small group of reporters. A White House spokeswoman did not immediately respond to a request for an explanation as to what Trump mean by "many sides."

White nationalists had assembled in Charlottesville to vent their frustration against the city's plans to take down a statue of Confederal Gen. Robert E. Lee. Counter-protesters massed in opposition. A few hours after violent encounters between the two groups, a car drove into a crowd of people peacefully protesting the rally. The driver was later taken into custody.

Mayor Michael Signer said he was disgusted that the white nationalists had come to his town and blamed Trump for inflaming racial prejudices with his campaign last year.

"I'm not going to make any bones about it. I place the blame for a lot of what you're seeing in American today right at the doorstep of the White House and the people around the president," he said.

Disturbances began Friday night during a torch-lit march through the University of Virginia before escalating Saturday.

The White House was silent for hours except for a tweet from first lady Melania Trump: "Our country encourages freedom of speech, but let's communicate w/o hate in our hearts."

Trump later tweeted: "We ALL must be united & condemn all that hate stands for." He also said "there is no place for this kind of violence in America. Lets come together as one!"

Trump, as a candidate, frequently came under scrutiny for being slow to offer his condemnation of white supremacists. His strongest denunciation of the movement has not come voluntarily, only when asked, and he occasionally trafficked in retweets of racist social media posts during his campaign. His chief strategist, Steve Bannon, once declared that his former news site, Breitbart, was "the platform for the alt-right."

Other Republicans were far more explicit in their denunciation of white supremacists.

Colorado Sen. Cory Gardner tweeted "Mr. President - we must call evil by its name. These were white supremacists and this was domestic terrorism."

Florida Sen. Marco Rubio wrote "Nothing patriotic about #Nazis,the #KKK or #WhiteSupremacists It's the direct opposite of what #America seeks to be."

And former Arkansas Gov. Mike Huckabee, father of Trump's press secretary Sarah Huckabee Sanders, posted "'White supremacy' crap is worst kind of racism-it's EVIL and perversion of God's truth to ever think our Creator values some above others."

The president's reluctance to condemn white bigots also stood in stark contrast by his insistence of calling out "radical Islamic terrorism" by name.

"Now, to solve a problem, you have to be able to state what the problem is or at least say the name," Trump said in a general election debate.

In his remarks Saturday, Trump mentioned the strong economy and "the many incredible things in our country, so when I watch Charlottesville, to me it's very, very said."