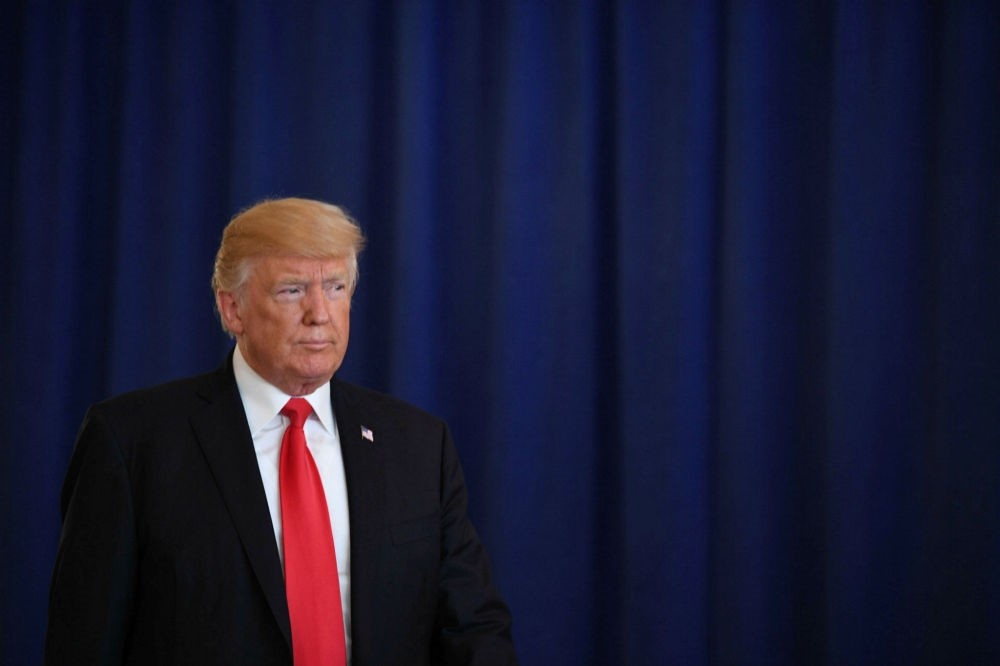 The U.S. President Donald Trump speaks to the press about protests in Charlottesville at Trump National Golf Club in Bedminster, New Jersey on Aug. 12.
by Compiled from Wire Services Aug 15, 2017 12:00 am

As U.S. President Donald Trump remained out of sight and silent, pressure mounted from both sides of the aisle for him to explicitly condemn white supremacists and hate groups involved in deadly, race-fueled clashes in Charlottesville, Virginia. As images of rising tensions and a deadly car rampage in Charlottesville filled TV screens nationwide, the president was criticized first for waiting too long to address the violence and then, when he did so, failing to explicitly condemn the white-supremacist marchers who ignited the melee.

In the hours after a car plowed into a group of anti-racist counter-protesters on Saturday, Trump addressed the violence in broad strokes, saying that he condemns "in the strongest possible terms this egregious display of hatred, bigotry and violence on many sides, on many sides."

The White House statement Sunday went further. "The president said very strongly in his statement yesterday that he condemns all forms of violence, bigotry and hatred and of course that includes white Supremacists, KKK, neo-Nazi and all extremist groups." It added: "He called for national unity and bringing all Americans together."

The White House did not attach a name to the statement. Usually, a statement would be signed by the press secretary or another staffer; not putting a name to one eliminates an individual's responsibility for its truthfulness and often undercuts its significance.

Charlottesville descended into violence Saturday after neo-Nazis, skinheads, Ku Klux Klan members and other white nationalists gathered to "take America back" and oppose plans to remove a Confederate statue in the Virginia college town, and hundreds of other people came to protest the rally. Some of the marchers used Nazi symbols, slogans and gestures that have been explicitly banned in Germany since World War II. The groups clashed in street brawls, with hundreds of people throwing punches, hurling water bottles and beating each other with sticks and shields. Eventually, a car rammed into a peaceful crowd of anti-white-nationalist protesters, killing 32-year-old Heather Heyer. A Virginia State Police helicopter deployed in a large-scale response to the violence then crashed into the woods outside of town. Both troopers on board died.

Trump's initial comments drew praise from the neo-Nazi website Daily Stormer, which wrote: "Trump comments were good. He didn't attack us. He just said the nation should come together. Nothing specific against us. ... No condemnation at all." The Neo-Nazi website praised Trump's Charlottesville Reaction, saying that "[Trump] loves us all." The website had been promoting the Charlottesville demonstration as part of its "Summer of Hate" edition.

The Daily Stormer post in question denigrated Heyer, who was fatally struck by a car allegedly driven by a man with white nationalist views, for her physical appearance and what it said were anti-white male views.

The Daily Stormer is a neo-Nazi, white supremacist website associated with the alt-right movement, which was spearheading the rally on Saturday in Charlottesville, Virginia which resulted in violence, including Heyer's death.

Charlottesville Mayor Michael Singer, a Democrat, slammed Trump's stance toward hate groups, saying on NBC's "Meet the Press" that he hopes Trump "looks himself in the mirror and thinks very deeply about who he consorted with."

"Old saying: when you dance with the devil, the devil doesn't change, the devil changes you," Signer said.

Both as a candidate and as president, Trump has met with charges that he has courted the support of white supremacists and nationalists, the so-called "alt-right," as a key part of his passionate voter base. He was forced at one point last year to publicly denounce the Ku Klux Klan and one of its leaders, David Duke. After Trump was elected, he installed Steve Bannon, a trusted figure in nationalist circles and former chairman of the hard-right outlet Breitbart News, as a top adviser in the White House.