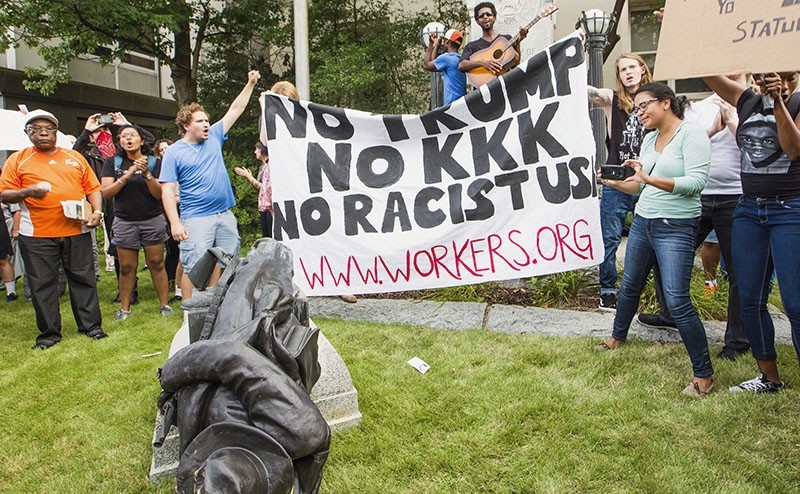 Undeterred by the violence over the planned removal of a Confederate statue in Charlottesville, Virginia, municipal leaders in cities across the United States said they would step up efforts to pull such monuments from public spaces.

The mayors of Baltimore and Lexington, Kentucky, said they would push ahead with plans to remove statues caught up in a renewed national debate over whether monuments to the U.S. Civil War's pro-slavery Confederacy are symbols of heritage or hate.

Officials in Memphis, Tennessee, and Jacksonville, Florida, announced new initiatives on Monday aimed at taking down Confederate monuments. And Tennessee Governor Bill Haslam, a Republican, urged lawmakers to rid the state's Capitol of a bust of Nathan Bedford Forrest, a Confederate general and early member of the Ku Klux Klan.

"This is a time to stand up and speak out," Lexington Mayor Jim Gray said in an interview on Monday. He had moved up the announcement of his city's efforts after the Charlottesville violence.

The clashes between white supremacists and counter protesters that left three dead in Charlottesville on Saturday, including two police officers whose helicopter crashed, appeared to have accelerated the push to remove memorials, flags and other reminders of the Confederate cause.

Some opponents appeared to take matters into their own hands. A crowd of demonstrators stormed the site of a Confederate monument outside a courthouse in Durham, North Carolina, on Monday and toppled the bronze statue from its base.

Activists brought a ladder up to the statue and used a rope to pull down the Confederate Soldiers Monument that was dedicated in 1924. A diverse crowd of dozens cheered as the statue of a soldier holding a rifle fell to the ground in front of an old courthouse building that now houses local government offices.

"I was a little bit shocked people could come here and come together like that," said Isaiah Wallace, who is black.

Wallace said he watched as others toppled the statue. He hopes other Confederate symbols elsewhere will follow.

"I feel like this is going to send shockwaves through the country and hopefully they can bring down other racist symbols," he said.

The Durham protest was in response to a white nationalist rally held in Charlottesville, Virginia, over the weekend. Authorities say one woman was killed Saturday after one of the white nationalists drove his car into a group of peaceful counter-protesters.

Although the violence in Virginia has prompted fresh talk by government officials about bringing down symbols of the Confederacy around the South, North Carolina has a law protecting them. The 2015 law prevents removing such monuments on public property without permission from state officials.

In response to the statue in Durham being torn down, Democratic North Carolina Gov. Roy Cooper tweeted: "The racism and deadly violence in Charlottesville is unacceptable but there is a better way to remove these monuments."

After the statue fell, several dozen protesters congregated on the street in front of the old courthouse. Some took pictures standing or sitting on the toppled soldier, in front of a pedestal inscribed with the words "In Memory of the Boys Who Wore The Gray." Police cruisers blocked off the street, and officers looked on — some filming. As it got dark, rally participants began to peacefully disperse.

Robin Williamson, who works downtown, arrived in the area about an hour after the statue came down. Williamson, who is black, said he can sympathize with people who are upset with the state of racial discourse in the country.

"People feel that with Donald Trump as leader, racists can be vocal," he said.

He said that while Confederate monuments have been defaced in other cities, it was surprising to see an entire statue brought down by protesters.

"This is a little bit more intense because they took the whole statue down," he said.

In Baltimore, a Confederate monument of a dying Confederate soldier embraced by a winged angel-like figure was found defaced by red paint, apparently an act of vandalism carried out over the weekend, the Baltimore Sun reported.

The drive by civil rights groups and others to do away with Confederate monuments gained momentum after an avowed white supremacist murdered nine African-Americans at a Charleston, South Carolina, church in 2015. The deadly shooting rampage ultimately led to the removal of a Confederate flag from the statehouse in that city.

In all, as of April, at least 60 symbols of the Confederacy had been removed or renamed across the United States since 2015, according to the latest tally by the Southern Poverty Law Center.

But such efforts also have made Confederate flags and memorials a rallying point for white supremacists and other groups of the extreme right, according to Ryan Lenz, a spokesman for the law center, which tracks hate groups.

While opponents of Confederate memorials view them as an affront to African-Americans and ideals of racial diversity and equality, supporters of such symbols argue they represent an important part of history, honoring those who fought and died for the rebellious Southern states in the Civil War.

New Orleans' efforts to dismantle four Confederate statues sparked protests and litigation that became so contentious that crews waited until the middle of the night to remove a 14-foot-tall bronze likeness of Confederate General P.G.T. Beauregard on horseback in May.

The violence in Charlottesville is unlikely to bolster the argument about the value of maintaining the monuments for historical value, Carl Jones, chief of heritage operations for the Sons of Confederate Veterans, said in a telephone interview. But he said he would continue to make that case.

"Where does it stop?" he said. "The Egyptian pyramids were built by slaves. Do we tear those down?"

Across the country, 718 Confederate monuments and statues remain, with nearly 300 of them in Georgia, Virginia or North Carolina, according to the Southern Poverty Law Center.

There are also 109 public schools named for Robert E. Lee, Confederate President Jefferson Davis or other icons of the Civil War-era South, the group said.

On Monday, Baltimore Mayor Catherine Pugh said in a statement she intended to move forward in removing several city statutes, including those of Lee and Stonewall Jackson. She stopped short of endorsing some city council members' calls for the monuments to be destroyed.

Memphis officials said the city would take legal action to get state approval to remove a Confederate statue there. The city council voted to remove it in 2015, but the effort was blocked by the state historical commission, according to a WREG-TV.

In Kentucky, Gray said he had heard opposition to his plans but also had received offers to pay for the statutes to be relocated as early as this fall.

"We expected criticism," he said. "It's a challenging and polarizing time - and issue."