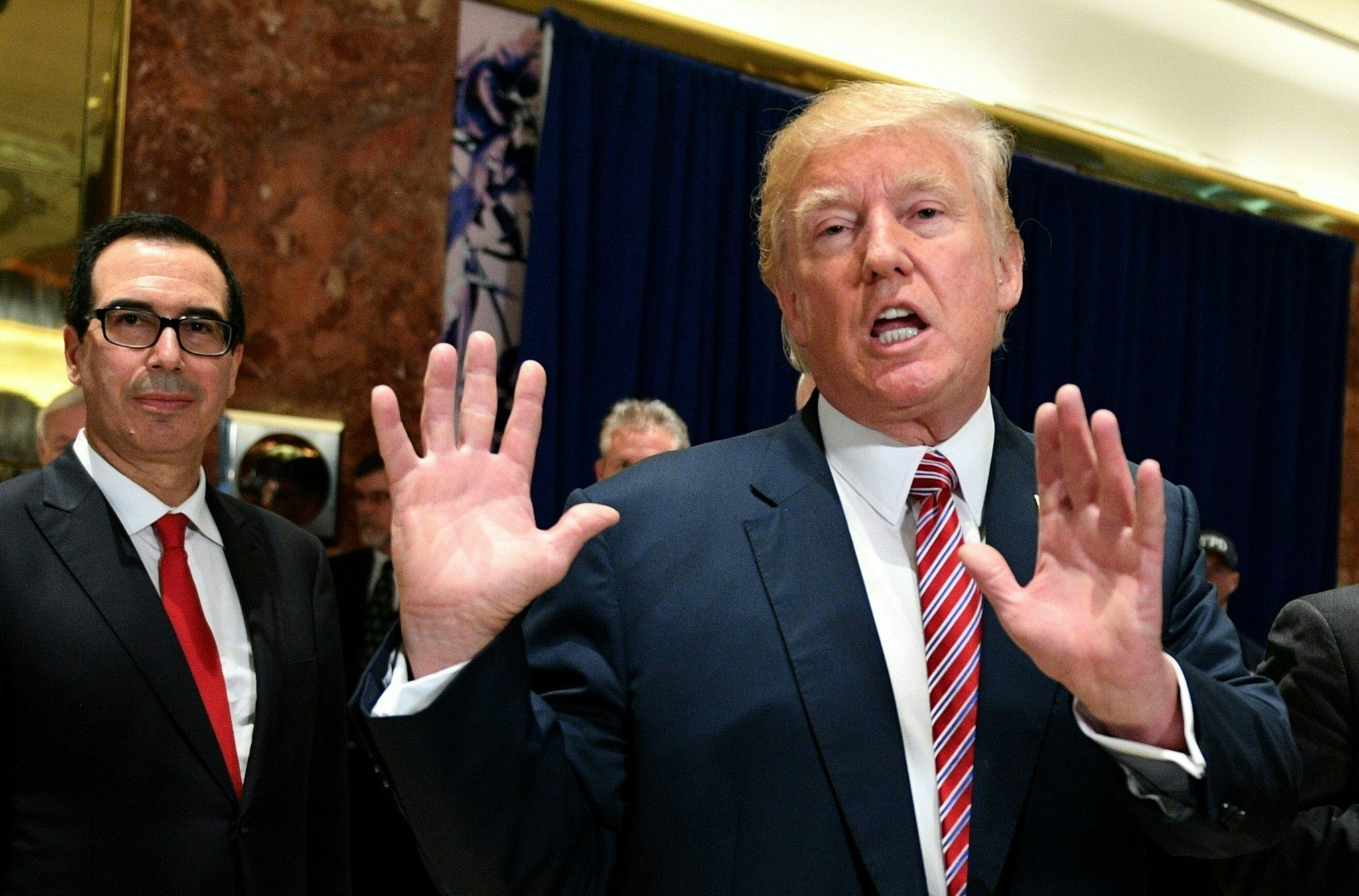 This file photo taken on August 15, 2017 shows Trump speaking to the press about protests in Charlottesville after his statement on the infrastructure discussion in the lobby at Trump Tower in New York. (AFP Photo)
by Associated Press
Aug 16, 2017 12:00 am

President Donald Trump has abruptly dismantled two of his White House business councils in an apparent attempt to manage his increasing isolation and the continued fallout from his combative comments on racially charged violence in Charlottesville, Virginia.

"Rather than putting pressure on the businesspeople of the Manufacturing Council & Strategy & Policy Forum, I am ending both. Thank you all!" Trump tweeted from New York.

Trump's comments came after one of the panels had already agreed to disband earlier in the day. A growing number of business leaders on the councils had openly criticized his remarks laying blame for the violence at a white supremacist rally on "both sides."

The decision came as the White House tried to cope with the repercussions from Trump's defiant remarks a day earlier. Presidential advisers hunkered down, offering no public defense while privately expressing frustration with his comments.

Some Republicans and scores of Democrats denounced Trump's statements as putting white supremacists on equal moral footing with counter-protesters in Charlottesville and called for an apology. Most of those Republicans, including congressional leaders, did not specifically criticize the president.

Trump himself stayed out of sight, tweeting occasionally about a primary in Alabama, the stock market and, once, his campaign slogan. Midday, he traveled from New York to his golf club in New Jersey for the night.

The president told associates he was pleased with how his press conference went, saying he believed he had effectively stood up to the media, according to three people familiar with the conversations who demanded anonymity because they were not authorized to speak publicly about them.

Denise Morrison, chief executive of Campbell Soup, declared she was leaving Trump's manufacturing council, saying, "The president should have been — and still needs to be — unambiguous" in denouncing white supremacists.

CEOs had begun tendering their resignations from White House panels after Trump's initial comments following the Saturday violence. The first to step down, Kenneth Frazier of Merck, drew a Twitter tongue-lashing from the president. Later, Trump called those who were leaving "grandstanders" and insisted many others were eager to take their places.

Members of the Strategy and Policy group, led by Blackstone CEO Stephen Schwarzman, concluded after a 45-minute conference call in the morning that they would end the council and announce their decision in a statement, according to two people familiar with the discussions. They insisted on anonymity to discuss private conversations.

In a subsequent call with Trump, the president agreed it was the right course of action. He tweeted before they could announce the decision they'd reached — making it appear it was his choice.

Publicly criticizing the president and resigning from his councils is a significant step for big-name corporate leaders. Though the policy influence of such advisory groups is sometimes questionable, simply meeting with Trump with TV cameras going is valuable face-time for the executives — and for the president.

Though not as outspoken as the business leaders, some fellow Republican leaders are going after Trump forcefully, too.

South Carolina Sen. Lindsey Graham said Wednesday the president "took a step backward by again suggesting there is moral equivalency" between the marching white supremacists and the people who had been demonstrating against them.

Former GOP presidential candidate Mitt Romney tweeted a similar slap shortly after the president's explosive press conference on Tuesday: "No, not the same. One side is racist, bigoted, Nazi. The other opposes racism and bigotry. Morally different universes."

Other leaders, including Senate Majority Leader Mitch McConnell and House Speaker Paul Ryan, made forceful anti-racism statements — but steered clear of mentioning Trump and his comments.

Meanwhile on a trip through South America, Vice President Mike Pence skirted questions about whether he agreed with Trump's assessment that some "fine people" participated in the Charlottesville rally. However, he said he stands by the president.

Under pressure, Trump made his condemnation of the Charlottesville violence more specific Monday, naming white supremacists, the Ku Klux Klan and neo-Nazis. But he returned to his defiant self Tuesday, effectively erasing the statement he'd read a day earlier.

In an impromptu press conference in the lobby of his skyscraper, he said there were "some very bad people" among those who gathered to protest Saturday. But he added: "You also had people that were very fine people, on both sides."

Several White House aides told colleagues they were dismayed with Trump's return to the Charlottesville episode Tuesday. But no one moved to leave the administration.

Chief strategist Steve Bannon told associates he thought Trump's performance would electrify his conservative base, according to a person who spoke to Bannon and insisted on anonymity. Bannon's job has been in question, with Trump refusing Tuesday to say he had confidence in him.

In an interview posted online Wednesday by The American Prospect, a liberal magazine, Bannon dismissed white nationalists, calling them "losers," ''a fringe element" and "a collection of clowns."

As Trump navigates this latest controversy, the White House on Wednesday said his longtime aide Hope Hicks would temporarily step into the role of communications director. Hicks is White House director of strategic communications, and a near-constant presence at the president's side.

She served as spokeswoman for Trump's presidential campaign and worked for years in public relations for the Trump Organization and his daughter's fashion and lifestyle brand.

Trump had no public appearances Wednesday, yet made his presence felt online.

In addition to announcing the dissolution of the business councils via tweet, he congratulated Sen. Luther Strange for advancing to a runoff in the Alabama special election to fill Attorney General Jeff Sessions' seat.

He also wrote that Heather Heyer, the woman mowed down by a car during the Charlottesville violence, was "beautiful and incredible."

Trump said Tuesday that he had planned to call her family to offer condolences. The White House did not answer questions Wednesday about whether he'd yet done so.

Elon Musk, the CEO of Tesla and SpaceX, quit the council in June because of Trump's decision to pull out of the Paris climate agreement.