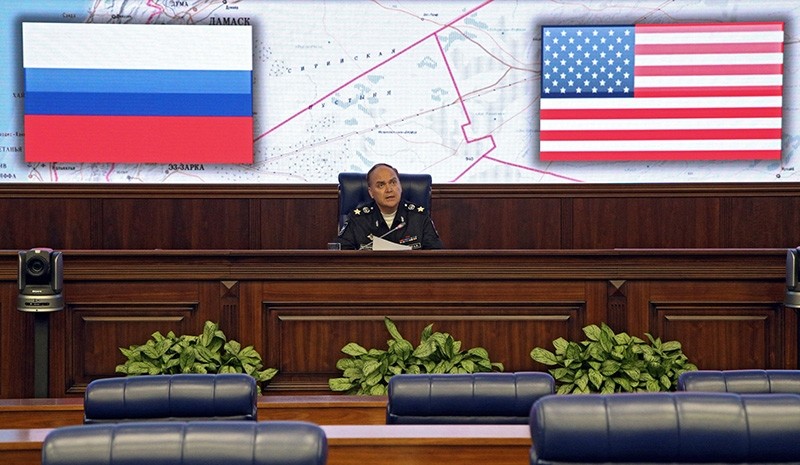 Russian then Deputy Minister of Defense Anatoly Antonov talks to the media during a briefing at the Russian National Defense Management Center in Moscow, Russia, Oct. 07, 2016 (EPA Photo)
by Compiled from Wire Services
Aug 21, 2017 12:00 am

Russian President Vladimir Putin on Monday appointed a new ambassador to the United States, Anatoly Antonov, a career official who is on the European Union's sanctions list because of Russia's role in the Ukraine conflict.

The EU has accused Antonov of being "involved in supporting the deployment of Russian troops in Ukraine," according to the description by his name on the sanctions list.

As deputy defense minister, Antonov participated in shaping policies that "threaten the territorial integrity, sovereignty and independence of Ukraine," according to the sanctions list.

Since becoming deputy foreign minister last year, Antonov has acted as a liaison between the foreign ministry and the military. The armed forces have growing influence over foreign policy, especially since Moscow launched its military operation in Syria.

A person who has dealt with Antonov said that he was a tough, military-style man.

Antonov replaces veteran ambassador Sergei Kislyak, who served at the post for almost a decade, during which some of the most turbulent events in bilateral relations have occurred. The Kremlin did not immediately say what, if any, position Kislyak will now hold.

Several close associates of U.S. President Donald Trump have been under investigation for what could have been unlawful interactions with Russian officials, including Kislyak, before Trump's election.

Russia and the U.S. set out to reset their relations soon after Kislyak was appointed in 2008, in an optimistic venture initiated by the administration of the U.S. president at the time, Barack Obama.

However, the deal unraveled just a few years later during the NATO-led intervention against long-time Russian ally Libya in 2011. Libya is now widely considered a failed state.

Then, in 2014, U.S.-Russian relations plummeted to their worst point since the Cold War when Russia annexed a part of neighboring Ukraine in retaliation for Kiev ousting its pro-Russian president amid mass protests calling for closer ties with the West.

U.S. Attorney General Jeff Sessions recused himself in March from matters connected to an investigation by the FBI following his admission he had talked to the Russian envoy.

Michael Flynn, a former White House national security adviser, was forced to resign in February after it became known he had failed to disclose the content of conversations he had with Kislyak and had misled the vice president about their meetings.

Jared Kushner, a White House advisor and Trump's son-in-law, met Kislyak on two occasions in 2016, the White House has disclosed. Kushner also had phone calls with Kislyak between April and November 2016, Reuters reported.

Moscow has denied any interference, and Trump has said his campaign did not collude with Russia.