Battle over Confederate statues continues across US 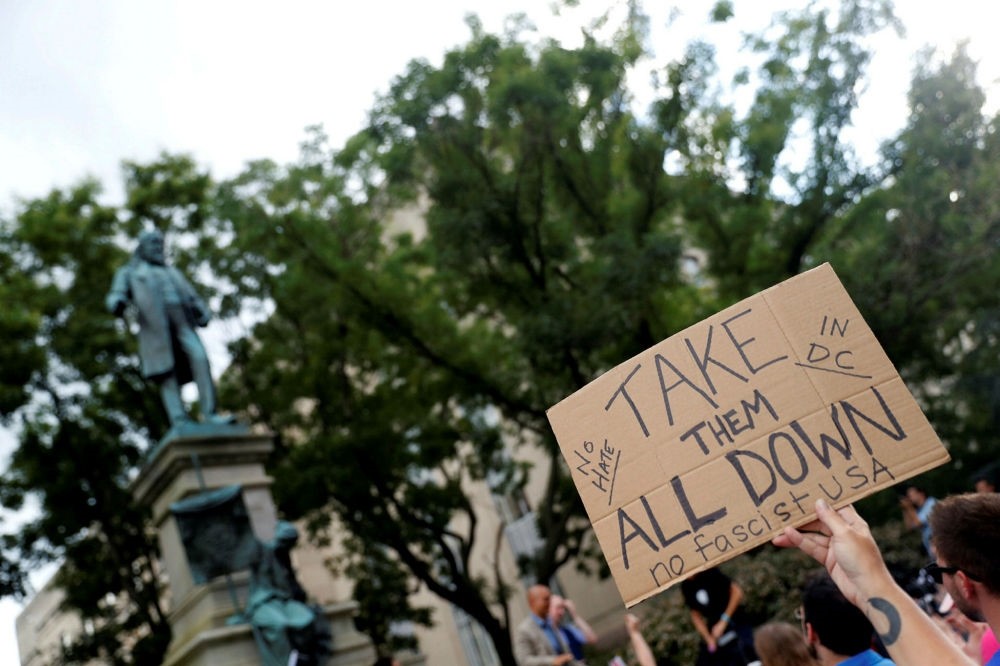 A demonstrator holds a sign during a protest calling for the removal of the statue of Confederate Gen. Albert Pike in Washington, Aug. 18.
by Compiled from Wire Services Aug 22, 2017 12:00 am

The CharlottesvIlle violence has created a fierce urgency to remove public statues, monuments and other glorified remembrances of leaders of the Confederacy in the U.S. Some believe that the statues mark history and honor heritage while others say they represent white supremacy and America's dark history of slavery.

Lately, University of Texas President Greg Fenves ordered the immediate removal of statues of Robert E. Lee and other prominent Confederate figures from a main area of campus, saying such monuments have become "symbols of modern white supremacy and neo-Nazism."

Fenves announced the move late Sunday night as crews were in place to begin taking the statues down. The school also blocked off the area during the process, and the statues are expected to be gone by mid-morning Monday, a spokesman said.

The university moved a statue of former Confederate President Jefferson Davis from its perch near the campus clock tower to a history museum in 2015. Fenves said statues of Lee, Confederate Gen. Albert Sidney Johnston and Confederate Postmaster General John H. Reagan, which were in the same area as Davis, also will be moved to the Brisco Center for American History on campus.

Crews early Monday first removed a statue of former Texas Gov. James Stephen Hogg, which was commissioned at the same time as the others, a spokesman said. Hogg will get another place on campus.

Violence broke out in Charlottesville, Virginia, on Aug. 12 when white nationalists protesting against the planned removal of a statue of Confederate military leader Robert E. Lee clashed with anti-racism demonstrators. One woman was killed when a suspected white nationalist drove his car into a crowd.

President Donald Trump's reaction to the events has drawn widespread anger from across the political spectrum. Trump did not immediately condemn white nationalists and said there were "very fine people" on both sides, prompting several chief executives to quit his business councils in protest.

A growing number of U.S. political leaders are calling for the removal of statues honoring the Confederacy, saying they promote racism. Supporters of keeping the statues in place contend they are a reminder of Southern heritage and the country's history.

Several cities have targeted Confederate symbols in response to the violence in Charlottesville. They include Baltimore, Maryland, which removed four monuments to the Confederacy in a pre-dawn operation last week, and Birmingham, Alabama, where the mayor vowed to seek the removal of a Confederate monument in his city. On Saturday, Duke University removed a statue of Lee from the entrance of a chapel on the Durham, North Carolina, campus. Arizona and Pennsylvania stated that they have no plans to remove any Confederate monuments or memorials.

There are more than 700 Confederate statues in the United States according to the Southern Poverty Law Center, most of them created in the 1910s and 1920s, decades after the Civil War ended. They were intended to reassert the power of white people, said Jonathan Leib, Chair of Political Science and Geography at Old Dominion University in Virginia.