‘Not so bright’: Trump stares into solar eclipse without sunglasses 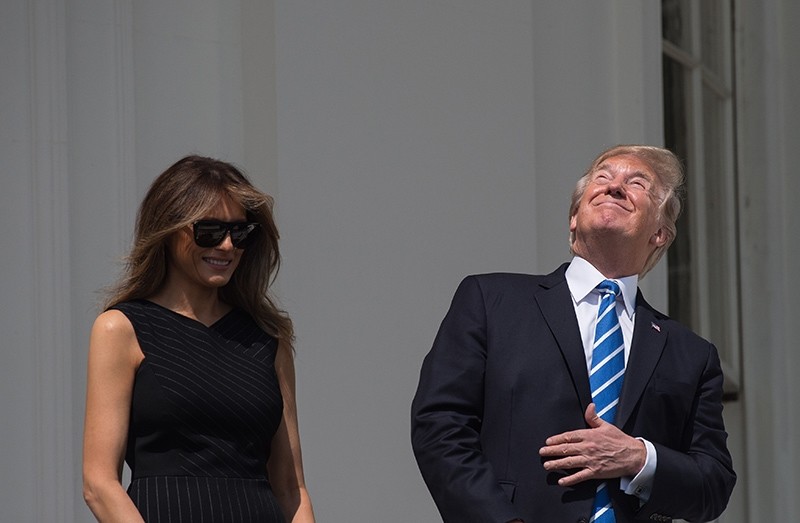 U.S. President Donald Trump and his family joined the millions of Americans who were watching the first coast-to-coast total solar eclipse in 99 years Monday.

However, the event at the White House, as has become the custom, involved an incident that was widely discussed in the social media.

As Trump, first lady Melania and their 11-year-old son Barron came out to the White House balcony to witness the cosmic spectacle, the president, despite countless warnings from experts, stared directly into the eclipse without any protective eyewear.

When Trump started tilting his head towards the sky without glasses, one his aides even shouted: "Don't look!" trying to prevent the commander-in-chief from doing what could potentially cause permanent eye damage.

The incident did not go unnoticed as many social media users and news outlets started sharing their thoughts about Trump's action, which mostly involved mockery and jokes.

Millions of Americans gazed in wonder at the cosmic spectacle, with the best seats along the so-called "path of totality" that raced 4,200 kilometers (2,600 miles) across the continent from Oregon to South Carolina.

It took 90 minutes for the shadow of the moon to travel across the country. Along that path, the moon blotted out the midday sun for about two wondrous minutes at any one place, eliciting "oohs," "aahs," whoops and shouts from people gathered in stadiums, parks and backyards.

It was, by all accounts, the most-observed and most-photographed eclipse in history, documented by satellites and high-altitude balloons and watched on Earth through telescopes, cameras and cardboard-frame protective eyeglasses.

NASA reported 4.4 million people across the country were watching its livestream coverage midway through the eclipse, the biggest livestream event in the space agency's history.