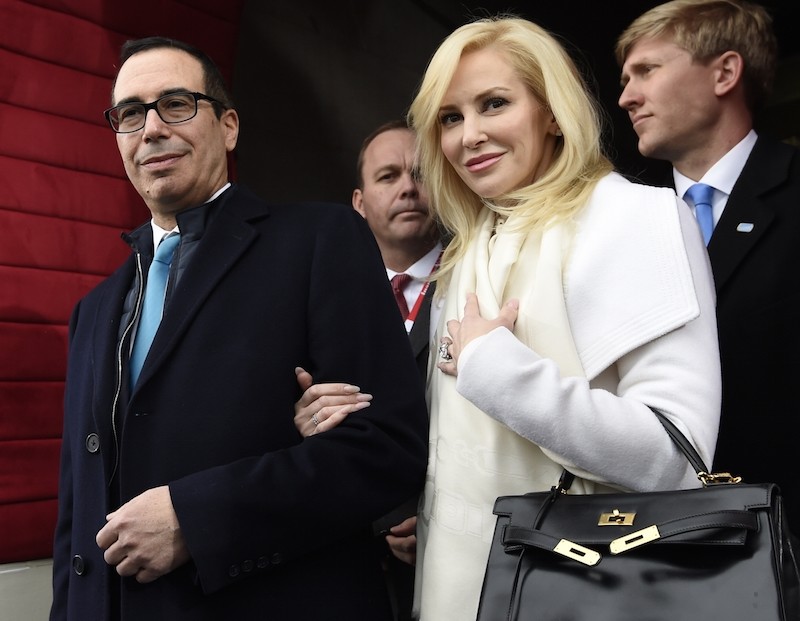 Louise Linton, the wife of U.S. Treasury Secretary Steven Mnuchin, has come under fire for an Instagram post in which Linton depicted her designer-label outfit while disembarking from a private government plane.

Linton posted the picture Monday after taking a day trip to Kentucky with the plane, flaunting several designer labels for her all-white outfit by "tagging" brands Tom Ford, Valentino, Roland Mouret and Hermes.

One commenter wrote under the Instagram photo, "Glad we could pay for your little getaway. #deplorable."

Linton, an actress, responded by calling one of the commenters "adorably out of touch." She also suggested she and Mnuchin contributed more to the U.S. economy and paid more in taxes than her critic.

"Have you given more to the economy than me and my husband? Either as an individual earner in taxes OR in self-sacrifice to your country?" Linton said in her reply.

"I'm pretty sure we paid more taxes toward our day 'trip' than you did. Pretty sure the amount we sacrifice per year is a lot more than you'd be willing to sacrifice if the choice was yours," the post continued.

Linton accompanied Mnuchin on his trip to Louisville as he tried to make the case for Congress to overhaul the tax code. In general, treasury secretaries only fly on government aircraft for international trips, opting for domestic carriers when traveling within the country.

Linton's frequent presence at Mnuchin's congressional hearings and on other trips not typically attended by spouses has also raised eyebrows.

The Scottish actress also garnered attention in 2016 after publishing a memoir about living in Zambia as a teenager for a few months in 1999. The book was widely criticized and discredited for fabricating details and furthering western stereotypes about Africa.