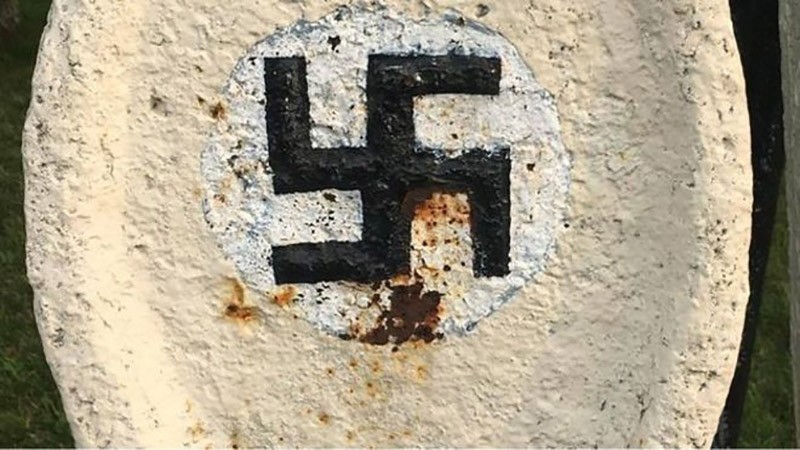 A Canadian small town in Quebec has refused to remove a historical anchor adorned with Nazi symbols from a public park.

Activist Corey Fleischer, who was trying to remove hateful graffiti around Montreal over the past weeks, was forcefully removed by police after he attempted to paint over the swastikas displayed in a park in Pointe-des-Cascades.

The police were reportedly notified by the town's mayor who claimed that the swastika anchor in question was part of "local history."

A plaque under the anchor identifies it as a "souvenir of Nazism," saying that it was probably used on a merchant boat at the end of World War II.

Drawing criticism from local media after the incident, Pointe-des-Cascades Mayor Gilles Santerre released an official statement on the town's website, claiming that the anchor which was found by local divers 25 years ago predated WWII.

"The village of Pointe-des-Cascades does not endorse Nazism," the statement read, adding that the village has a "beautiful community and family spirit."

Santerre also said in the statement that a new plaque for the anchor was planned to better explain the context of the much-debated historical piece and "avoid confusion."

After being released from custody, Fleischer told the BBC that the meaning of the swastika symbol on the anchor was clearly one of Nazi Germany, saying that the swastika painted in black over a white base was a stylistic choice by the Third Reich.

"Maybe the city did not know," Fleischer said. "But I know exactly what this is. There is no ifs ands or buts about it."

The activist also underlined that the anchor belonged in a museum rather than a public park, where it could be explained with a clearer background as a piece of history.

"It is a place where people come to feel safe and this is being displayed for everybody to see," the BBC cited Fleischer saying.

Fleischer, who is the founder of the "Erase the Hate" movement, has travelled around the world with the aim to remove hateful and anti-Semitic graffiti.