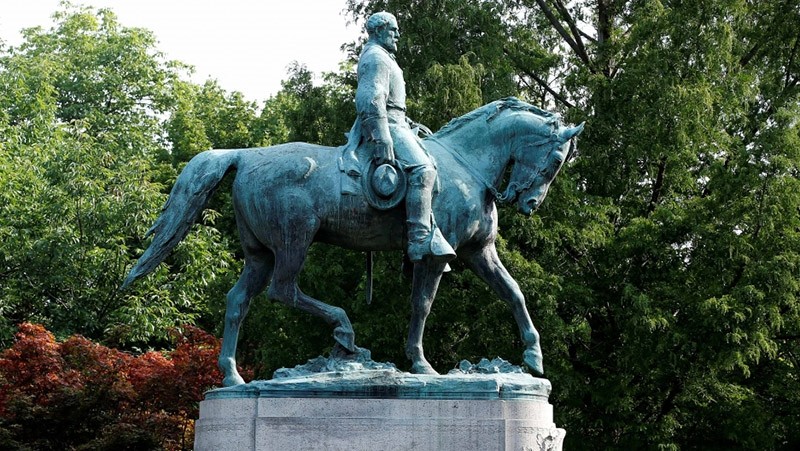 Workers in Charlottesville shrouded a statue of Confederate Gen. Robert E. Lee in black on Wednesday, a move intended to symbolize the city's mourning for a woman killed while protesting a violent white nationalist rally earlier this month.

Live video from the scene showed a public works truck near the base of the statue and workers gathered around it with a large black drape. They used ropes and poles to cover the imposing statue of Lee on horseback as onlookers took photos and video. Some of the crowd cheered as the cover was put in place.

The city council voted Tuesday to shroud the Lee statue and another of Confederate Gen. Thomas "Stonewall" Jackson at another nearby park. That vote came at the end of a hourslong meeting packed with irate residents who screamed and cursed at councilors over the city's response to the rally.

The Aug. 12 "Unite the Right" event was believed to be the largest gathering of white nationalists in a decade. Neo-Nazis, KKK members, skinhead and members of various white nationalist factions clashed violently with counter-protesters in the street adjacent to Emancipation Park, where the Lee statue stands and where the rally was to take place.

The fighting went on largely uninterrupted by authorities until the event was declared an unlawful assembly and the crowd was forced to disperse. Later, a car rammed into a crowd of demonstrators, killing 32-year-old Heather Heyer.

The man who police say was driving, James Alex Fields Jr., has been charged in her death.

The death toll for the day climbed to three when a helicopter that had been monitoring the event and assisting with the governor's motorcade crashed, killing two state troopers.

The white nationalist rally was sparked by the city council's vote earlier this year to take down the Lee statue. That decision is in the midst of a legal challenge, and a judge has issued an injunction preventing the city from removing the Lee statue while the lawsuit plays out.

A state law passed in 1998 forbids local governments from removing, damaging or defacing war monuments, but there is legal ambiguity about whether that applies to statues such as the Lee monument, which was erected before the law was passed.

A hearing in the case is scheduled for Sept. 1.